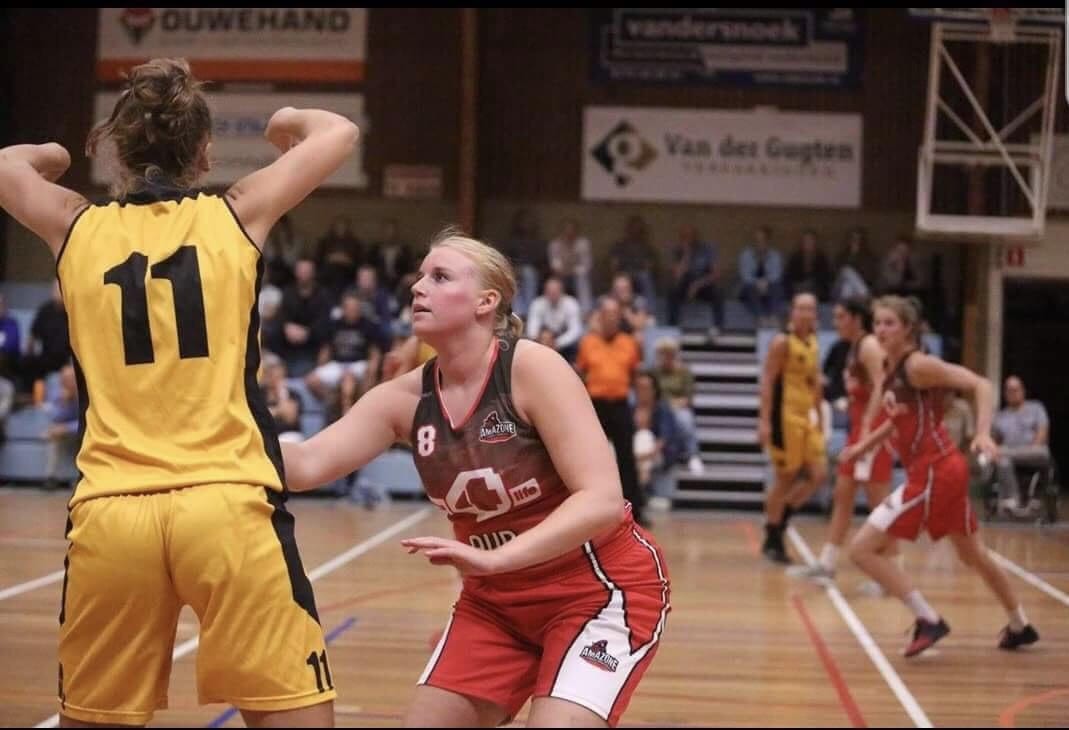 Lisa Denies started playing for Amazone Utrecht back in 2004, when the club was founded. She continued playing there, until Amazone announced that they couldn’t enrol a team for the 2018-2019 season. For now, that meant the end had come for Denies’ basketball career with Amazone.

Well I am Lisa Denies, I am 27 years old and I live in Utrecht where I have also played basketball since I am 7 or 8 years old.

I think because of my mother. She played basketball in the past at Jump IJsselstein, Prisma College and Cangeroes, so it wasn’t quite a surprise that I found myself in the gym and start playing and shooting around. I didn’t take long before I started my first basketball practice.

Why do you love basketball?

I like many kind of team sports. Basketball is very dynamic, quick and most of the time there are many spectacular things to see on the court. That makes it amazing, and never boring at all.

Where did you play basketball?

I didn’t play at many basketball clubs at all. I used to play at Jump IJsselstein, later on I played at Amazone Utrecht since I was 13 or 14. This season I will play at Cangeroes, also in Utrecht.

I would describe myself as a team player who like to give my teammates the opportunity to finish good offenses.

I would like to create and use more of my own opportunities, for example driving more to the basket than I do now.

Have you ever been motivated by a basketball player?

To be honest, no. I never had a moment that I idolize a basketball player. 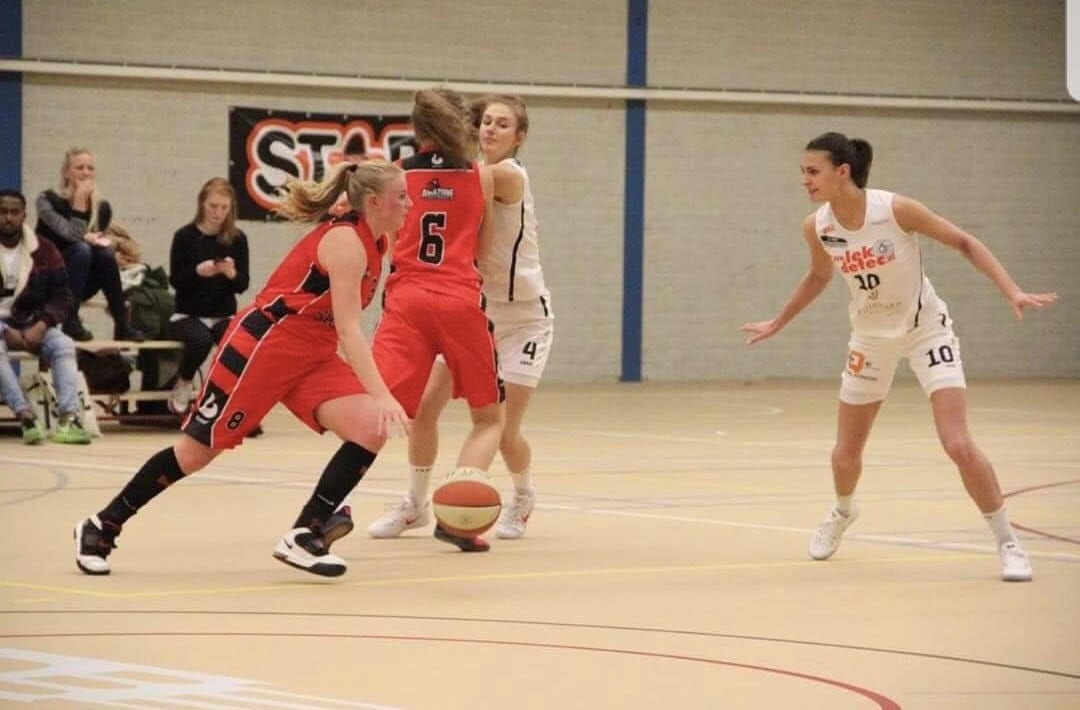 What kind of hobbies do you have besides basketball?

Well besides basketball I fitness a lot of times. I like to hang out with my friends, having good times.

You played at Amazone Utrecht for a lot of years. What made you stay there for that long?

Amazone always stimulated and motivated basketball for women in Utrecht, what I think it’s good. It was never a big organization, always a small one. I think that is the reason to know each other quickly and build a great team chemistry. Many players stayed for a long time.

Can you tell us about your time at Amazone?

When I played my first season at Amazone I was like 14 years old. We were always close with each other. It was a wonderful time; playing a lot of tournaments, going outside of the Netherlands and we won the championship in the Promotiedivisie with Amazone. There were good seasons, and there also were seasons when it wasn’t that good. I really enjoyed my period at Amazone. As I said, I played at Amazone since I was 14 years old, so that is since 2004, I guess.

Unfortunately, Amazone won’t compete in the competition this year. How do you feel about that?

In the last months of last season, Amazone officially announced that they won’t play basketball anymore. Just by hearing that, thinking that it would be the last time to play for Amazone, that hurt pretty much. I mean I played at Amazone since they started this organization. You know that you will leave something where you played almost your entire career. It’s such a pity, not only for me and my teammates, but also for basketball in Utrecht.

Amazone announced that they are willing to come back with women’s basketball. What will be necessary to bring that back in Utrecht?

That chance might be realistic, but I think that depends on what organizations in Utrecht wants. It’s very important to work together with many different organizations in Utrecht, but that is not that easy. It depends on money and other financial potentials. Ray Laatst did that for many years, and if someone else wants to achieve that, then it would be possible to bring back Amazone. 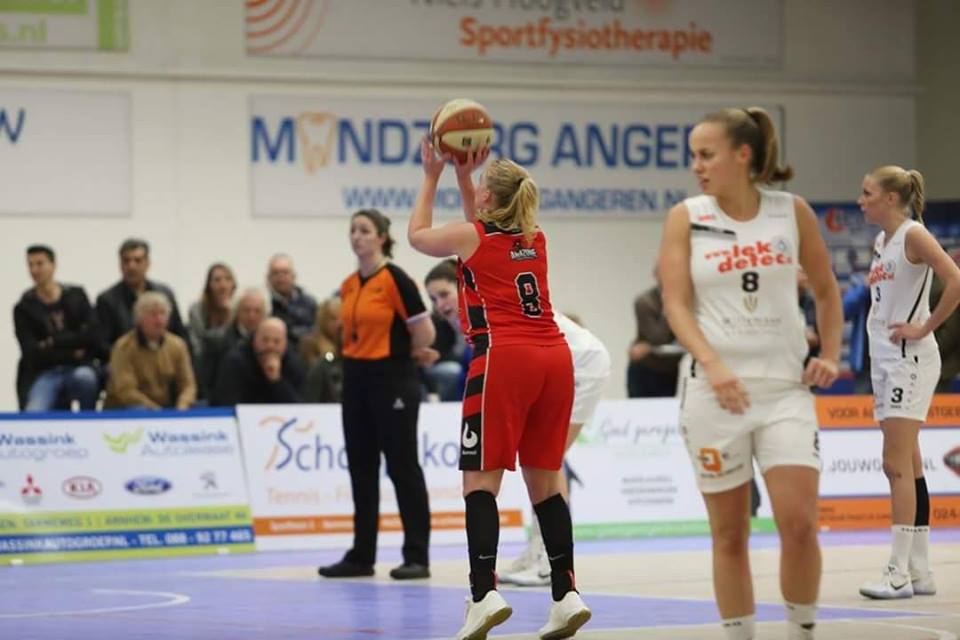 How much potential and opportunities has think basketball in Utrecht to you?

Can you tell us about an unforgettable memory or game?

Do you have a favorite quote or movie?

I don’t have favorite quote, but like many others I love Coach Carter and Love and Basketball. Those are classical movies you won’t see again so quick.

What do you think about basketball in the Netherlands at this moment?

Quite difficult to tell. It’s just too bad that many teams are leaving because of financial problems. However, there are two new teams in the Vrouwen Basketball League. I hope that the teams who left in the past years will be back. I can remember when I played in the youth of Amazone, there were like 14 teams. That is something you want to see or make it happen again.

What do you think about 3×3 basketball?

It’s pretty nice to see. It is very different from 5×5 basketball. I think it’s less strategic and more dynamic. It’s good that the Netherlands take 3×3 basketball serious and that the Orange Lions and Orange Angels are showing outstanding performances.

Did you play 3×3 basketball yourself?

I played it a couple of times before, just for fun, but I never competed at a tournament or something like that.

Did you ever had the ambition to play outside of the Netherlands?

Not really, but I thought of that a couple of times before. But I never really planned to move somewhere outside of the Netherlands.

I hope that Amazone will be back in the competition. It will be a nice opportunity to make Amazone a stronger organization, but for now I want to play in the Promotiedivisie again, also to show all the other players who I am and what I am capable of.