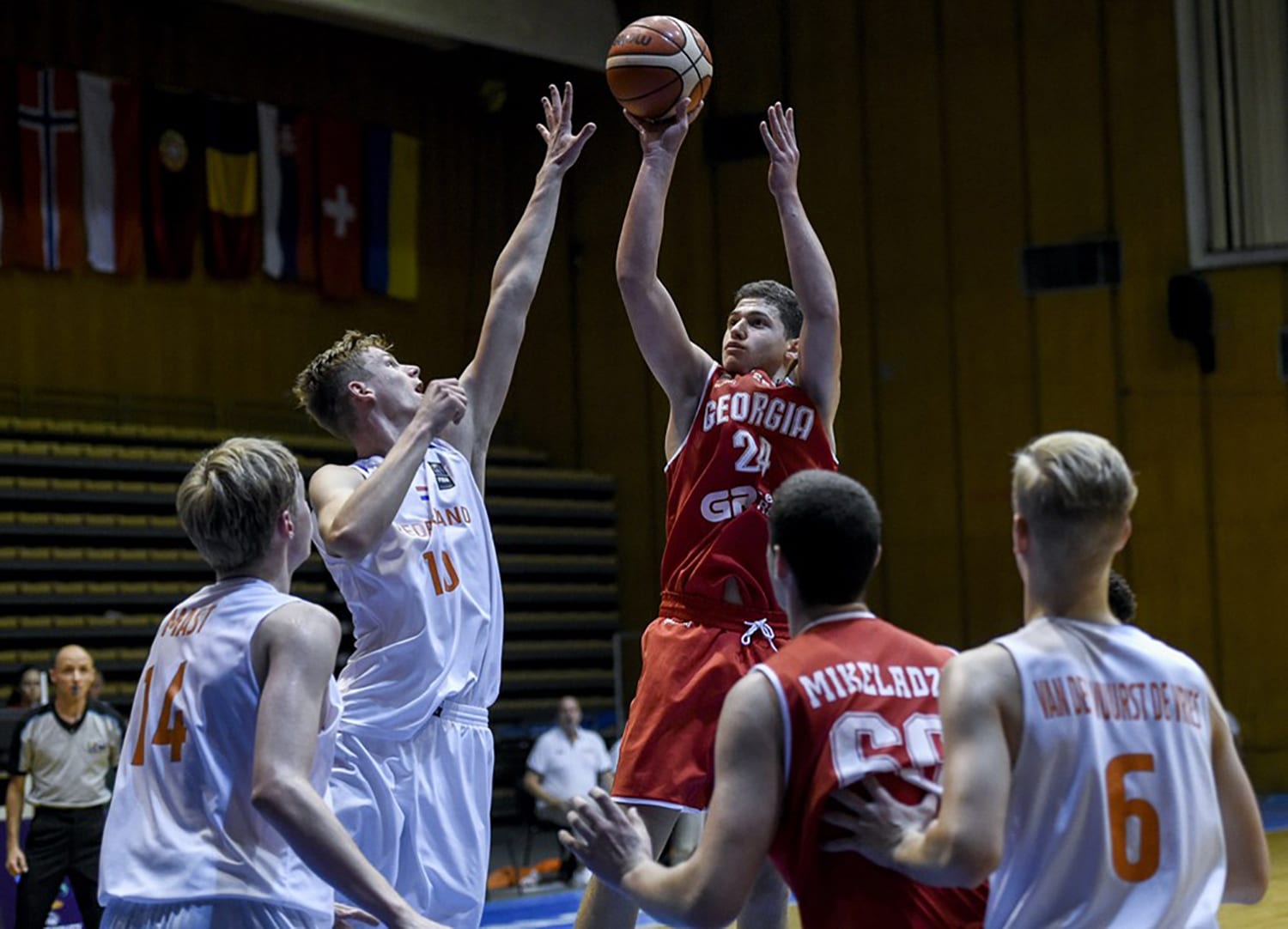 Bas Leyte is a Dutch player that just started his basketball journey in the USA. Before that, he played for numerous teams in the Netherlands and Canary islands. He is very excited for his new adventure in New Hampton and ready to start grinding for even bigger success. We Ae Basket took the time to ask him a few questions about his background and basketball journey so far.

My name is Bas Leyte, I am 2.08 m (6”10) and I am currently playing basketball at the New Hampton School in New Hampshire.

2. Which teams did you play for?

I played for Bergen op Zoom Giants, CBA Apollo and I am currently playing at the New Hampton School.

3. When did basketball become your future?

That was when I turned fourteen and I started to get attention from foreign teams.

4. Your father is very important in your basketball life. What is the most important thing he has told you?

I do not think that there is one specific thing that is the most important. My father has taught me a lot of things, not only for basketball, but also outside of sports. He is one of the reasons I am in the United States now, and maybe even the biggest reason. He is very wise, and he has taught me a lot, but he always says that it does not matter to him what I do, basketball or ballet, as long as I enjoy it.

5. What was it like to play for Bergen op Zoom?

It was certainly a lot of fun to start playing basketball there, and I will always enjoy looking back on my years there, but after a while, it was time for me to leave the club. Still, I am very happy with the years I have had there.

6. Where there any match ups that you would especially enjoy?

No, I always have the same mentality on the court, it does matter if I play against friends or boys I do not know, as long as I win the game. After the game, it was always fun to meet up with the friends I gained through the years.

That was definitely a great experience, but I was also a tough year, not only physically, but also mentally. But I did enjoy it there a lot. It was very cool to see so many cultures together.

8. Was the basketball level different there?

Yes, it was mainly the individual skills of the boys that made it tougher for me, but that only motivated me to get better than them.

9. What did you do besides basketball?

In Spain, I had a very busy schedule, next to playing basketball, I spend a lot of time on school and on my homework, as good grades are very important and efficient in attracting American College coaches.

My team did get pretty far, but it was not good enough to be satisfied with it. We had to win two games against a certain team to go through to the Spanish Finals, but we only won one game, and therefore we did not advance.

11. Why did you decide to go to New Hampton in the United States?

I had a great year in Spain with the CBA Academy, but I got attention from one of the best school in the United States. That was a great opportunity for me that I decided to take. I also taught that their program was better for me to develop individually.

12. You have played tournaments in the United States before. How did you experience those?

Yes I have played in several tournaments before, and In those tournaments I hade my first looks of how the game was played here. Those tournaments were a great thing which helped me making my decision coming to the USA.

13. Did you experience any special moments there?

certainly, I experienced great things throughout the whole year, made new friends I won’t forget and I will keep in touch with. It is the whole picture that makes it so special for me. I experience things that I am so proud of, and that I can tell other people. I think that it is super special that all those different cultures blend so well.

It is quite cold here, but the facilities are fantastic and everyone is very nice. Furthermore, everything is arranged well and the food is great, it’s great here.

15. Is this different than in the Netherlands?

It is whole new situation over there, where I am appreciated as a player, there is more intensity and seriousness, everyone here wants to win the games. And is willing to do everything to achieve that.

16. What is the biggest difference between basketball in New Hampshire and the Netherlands?

Everything is very physical and the game goes a lot faster. It is 100 times as difficult in New Hampshire than in the Netherlands.

17. Are you going to school there?

Yes, I am enrolled at the New Hampton School, and the teachers are very active with helping me and therefore my grades are better than ever. So, it is going great.

18.Are you going to play other sports in High School?

No, to prevent unnecessary injuries, I do not play any other sports.

19. Are you planning on visiting a lot of NBA games, now that you are living in the United States?

No, I do not have a lot of time to do so. If I want to get the chance to ever play in the NBA, I have to go to College first, so I am focusing on that.

20. What is your favorite NBA team?

21. And do you have an all-time favorite player?

That would be Russel Westbrook

22. What are you plans for the future?

Basketball is my future plan, so I want to play professional basketball

23. Is there a team or country you still want to play?

No, right now I haven’t really thought about that, except for the fact that I want to play at a College in the United States

24. Do you have a tip for players who want to go to the United States to play basketball as well?

I have a couple of tips: never give up, it does not matter how hard it gets. Do not listen to negative comments too much, “if you can dream it, you can do it.