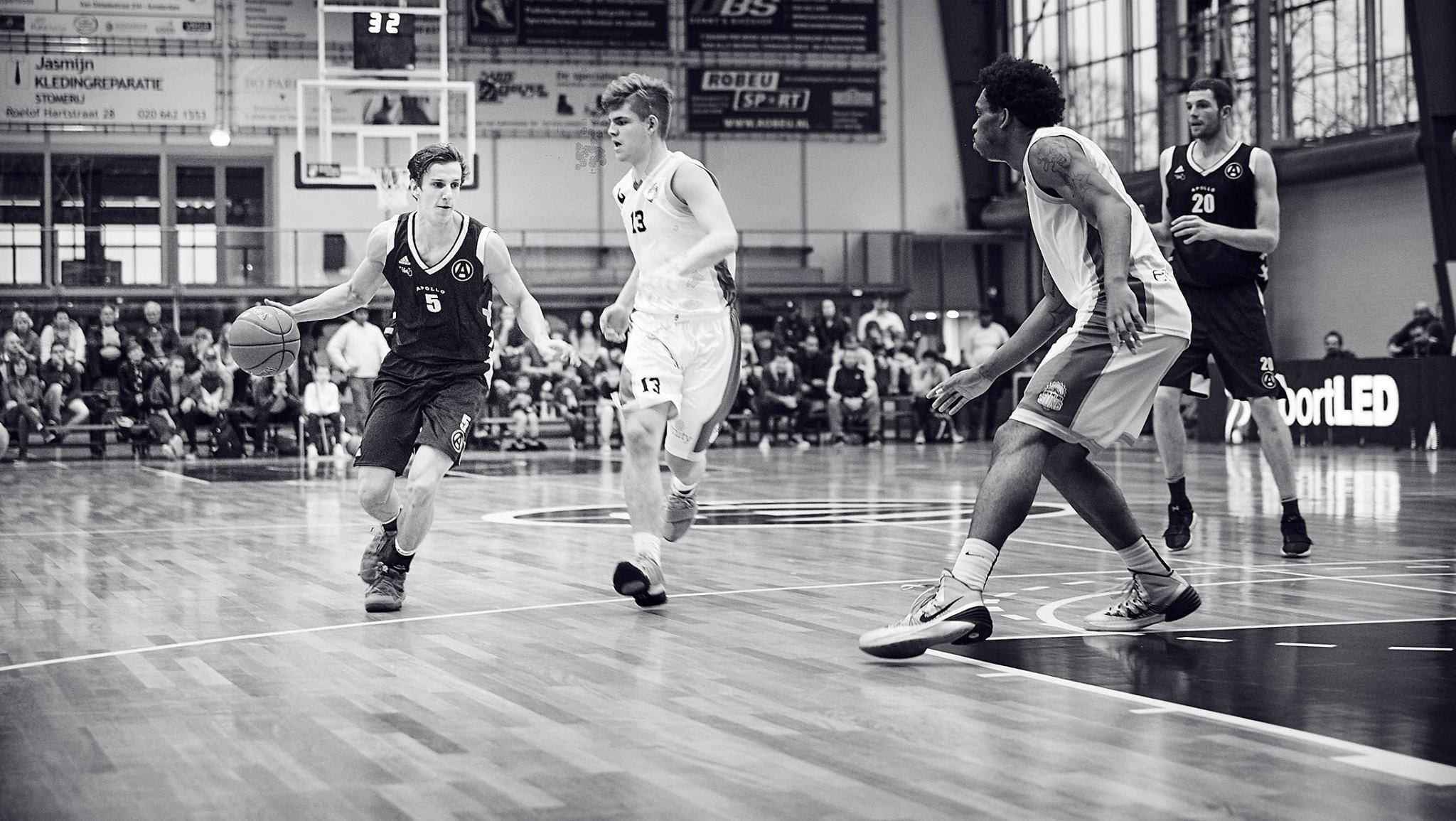 Mack Bruining is a 20-years-old guard playing for Apollo Amsterdam. Though he is only 20, he has been with the team for a while, and besides that he already has some important experience playing abroad.

1. Is your family a basketball family?

Yes, my father used to be a professional basketball player in the Dutch league and he also played in several Dutch national youth teams.

2. Why did you start playing basketball?

I played soccer until I was eleven years old, and I was pretty good at it as well. My father always said that I had to do what I enjoyed, but he often gave hints that I had to go and try out basketball. We often went to shoot on the basketball court behind our house, and I always liked that a lot (though he beat me every time with the shooting games), so I decided to try out a practice at CBV Binnenland. I liked that a lot and they also thought I had talent, so I decided to just go and play basketball.

3. Which clubs did you play for?

I played for a couple of different clubs: CBV Binnenland, Rotterdam Basketbal, Lokomotief Rijswijk, Red Star Belgrade Academy and I am currently playing for Apollo Amsterdam.

4. Can you describe your playing style?

I am fast and aggressive and I often play like that. I push the ball and therefore I find my teammates a lot on the court. Besides that, I have good court vision, I know when we have to play a set play and I am very strong tactically. I am not very athletic, so I really need my speed, vision and shot.

5. What is your strongest skill on the court?

That has to be my speed. Because of that, I often can pass by defenders, and if they stay at a distance, I can shoot quite good as well.

6. You finished high school in Serbia. How did you end up there?

I ended up there via my old coach, and now very good friend, Aleksander Lukic. When I was 15 years old, I already wanted to go to the United States, but this could not happen because of the Visa. Because of this, he told me that he knew a place for me. He had some good contacts with Red Star and therefore I could go there and try out. They decided that I had talent and that is why I could go and play there. Besides that, I had to finish high school, so that was part of it as well.

7. Why did you make the choice to go there?

In Serbia, they have a whole different mentality than in the Netherlands. I really wanted to develop myself and get better, and there are not a lot of possibilities for that in the Netherlands. There, they practiced basketball, strength and conditioning, 5, 6 or sometimes even 7 hours per day. This was the best opportunity for me to develop myself.

8. What is the biggest difference in the (basketball) culture between Serbia and the Netherlands?

A lot of boys there do not have an education, no money, nothing. Basketball is their only option, and if that options is not there, they will be on the streets. Therefore, they will do everything to become a professional basketball player, it is literally basketball or ‘death’. For example, there was a boy who never watched basketball. At one point, I asked him why he never watched the NBA and he answered: “I don’t even like basketball anymore, but I have to play it, otherwise I cannot take care of my mother and the rest of my family”. His mother did not have a job and sat in a wheelchair. Because of this mentality, the only option is to become a pro.

9. What kind of club is Red Star Belgrade?

It is more like an Academy than a club, it is similar to CBA, but it is much more detailed than that. It is focused more on individual players and there are a lot of individualized practices as well. It can definitely not be compared to the Netherlands, because we would practice 6 hours a day, and that is just not possible in the Netherlands. The Men’s team was not comparable as well. The arena was always filled with 40.000 people and it almost seemed like a soccer match, that is how loud the fans are screaming. The level is not comparable as well, as the men’s team plays in the Euroleague.

10. Can you describe a normal day there?

The next team practice would be a from 15.00 until 17.00, and then it would already be time for dinner. In the evening, between 21.30 and 22.30 there was the possibility to go to the gym, which would be the case around 4 times a week. That would be the end of the day, and we would do the same thing all over again the next day.

11. What is the most important thing you have learned there?

The first practice I was there, the coach told me 5% is talent, 95% is hard work. That is the life lesson that I learned there. Nothing comes easy, and if you want achieve something, you have to work harder than everyone else.

12. What is your best basketball memory of that time?

All the practices and all the hard work. During that time, it was only basketball, eating and school. That were the only thing you would have time for. This was awesome to experience. Besides that, we won the championship of Belgrade, and that was pretty great too.

13. Do you have a tip for players who want to play abroad during their high school years as well?

The first weeks are the worst, and you will have to get through those weeks. I did not speak the language, and they do not speak a lot of English. But, if you get through that, and you remember why you came there in the first place, it is a lot of fun. Right now, I really miss it. I also found a lot of comfort in my religion. This made me strong and helped me through those difficult first weeks. I remember it quite well that I received an email from mu apostle in the Netherlands, apostle Edgar Holden of the ‘Levende Steen Ministries’ about how it was a privilege and a challenge at the same time. This email and the help of apostle Holder really helped me through the first weeks, knowing that he would pray for me and God would help me.

14. How was to go to Apollo after playing in Serbia?

It took some getting used to, as I went from practicing 6/7 hours a day in Serbia to 3 at the most with Apollo.

15. How was it to start your first official game for Apollo men’s 1?

I thought it was really awesome, but it did not feel a lot different than a normal game for me. It just felt like a normal game.

16. What can you learn from point guards like Dimeo van der Horst and Aron Royé?

I learn a lot from Dimeo during practices. He is a real leader in the team, but he gives me even more attention, because I play on the same position as he does. He teaches me a lot about making the right decisions and how I can become a better point guard. Last year, Aron Royé was like my mentor as well and he also taught me a lot.

17. You are studying next to playing for Apollo. How do you combine those two things?

It is actually quite good, as I am attending the Johan Cruyff Academy. Here, sports at the highest level can be combined quite easily with school. This means that it is never a problem if I have to practice, and therefore I can pass all my classes.

18. You are also playing for the Talent team of Apollo. How do the DBL and DTL team differ from each other?

The Dutch Basketball League is a lot faster and more physical than the DTL. It is no problem for me to play 40 minutes in the Dutch Talent League, but in the DBL I am out of breath after 5 minutes.

19. What does playing for the Dutch national youth team mean to you?

It actually means a lot to me to be able to play for the Netherlands. This is the biggest honor you can have as an athlete, and therefore I think it is really special that I can play for my country.

20. What is it like to compete against the best players from other countries?

It is different than other game, because the level in countries as Russia, Croatia and Romania is a lot higher than in the Netherlands. Those players just practice a lot more and more efficient, therefore the level is higher. It is a lot of fun to be able to compare yourself with them.

21. Who is your favorite player?

It might be strange, but my favorite players are Zlatan Ibrahimovic and Conor McGregor. They are just really good, and they also know that they are. I can learn a lot from their confidence and arrogance, and I think I need to improve that to be able to develop myself more. If it has to be a NBA player, I would choose Milos Teodosic. I practiced with him, and I absolutely love his playing style. He is able to always make the right decision at exactly the right time. I can learn a lot from that.

22. What is your favorite team?

That would be Red Star Belgrade in Europe and the Chicago Bulls in the NBA.

23. What is the best basketball tip that you have ever gotten?

That would definitely be that you have to work harder than anyone to get where you want.

I think everyone has the ambition to play abroad. I would like to play somewhere in Europe in the Euroleague. If I can choose I want to play in the first team of Red Star Belgrade.