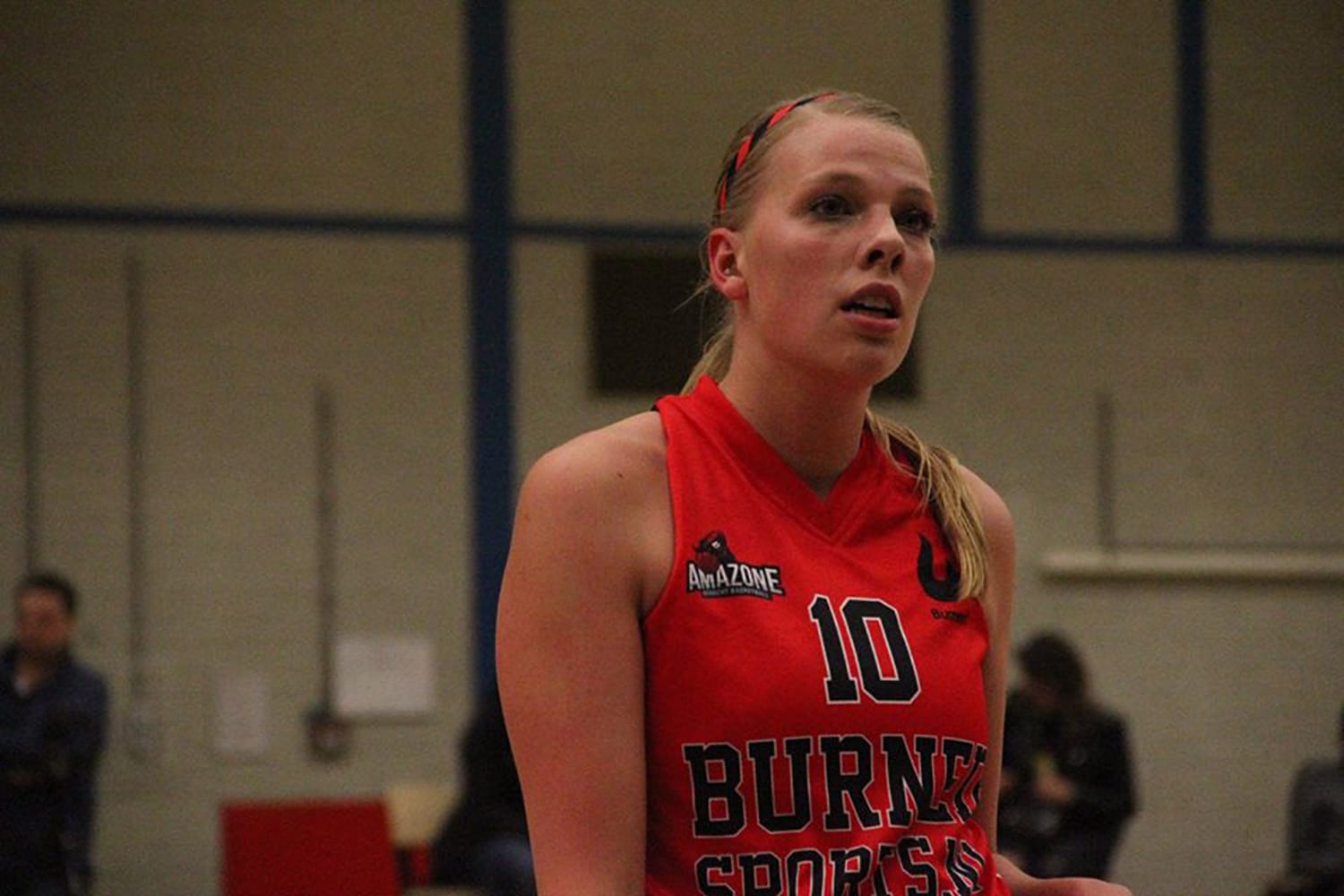 Renee Hoveling is a Dutch player that has been around for a while. In her time in the VBL, she has played for three different clubs, Amazone/Uball, CTO and Grashoppers. This year, Amazone has a lot of younger girls on the team, but nevertheless, Renee hopes that Amazone will do a great job in the VBL, and that the chemistry within the team will be good.

1. Why did you start playing basketball?

My mother used to play basketball, and that is what got me interested as well. I started playing at SVO in de Meern.

2. What is your best memory of that time?

My favorite memories of that time are of the fun SVO camps we used to have, the games on Friday night at the Marehal and the practices that were (sometimes) filled with laughter.

3. What is your biggest strength on the court?

My biggest strength is my versatility; I can play on several positions.

4. Can you describe your playing style?

I like to play fast, and switch between a strong drive or shot, and a great pass.

5. Which club has the best baskets for a shooter?

I think that every team in the VBL has great baskets. There is only one condition that needs to be met, and that is that the baskets are not hung from the ceiling.

6. How do you practice to get a good shot?

7. Do you think you need talent to be a good shooter, or is a lot of practice enough?

It is probably a bit of both. Talent is definitely a part of it, but you can get a lot better by practicing a lot.

8. What can you teach the younger girls?

I am not sure if I can actually teach them something specific, but I hope I can help them with many things to improve their game.

9. Why did you make the choice to temporarily leave Uball to play for the CTO?

I made that choice, because I wanted to develop myself more as a basketballplayer. My team at Uball was falling a bit apart at that time, and therefore I decided it was time for a new challenge.

10. Did this bring what you expected?

It has definitely partly made happen what I wanted. In the two years that I practiced and played there, I have grown as a player and I have definitely also grown as a person.

11. What is the most important thing you learned during your time at the CTO?

I learned a lot about the tactical side of basketball. with Uball we paid little to none attention to tactics. With the CTO, this meant watching videos and reenacting the opponents plays.

12. You attended a LOOT-school. How did a normal day for you look like?

My day started with practice in the morning. After that, I would have to go straight to school, as I already would miss the first period because of the practice. You had make up for those missed classes during free periods, where you had to join another class. Or you could make up for those classes during so called LOOT-hours. These are hours, where the rest of your class is at P.E., a class I did not have to take. It was not possible to make up for the missed classes at the end of the day, because practice started again at 3:30.

13. Then, you went to play at Grasshoppers. Is there a clear difference between the three clubs you have played at?

The biggest difference with the CTO is the hours of practice you have. With the CTO, we practiced 5 days a week, two times per day. At Grasshoppers, we practiced 3 times per week, and it is the same now at Amazone. Furthermore, the whole environment at CTO is professional, and everything is arranged for you: from dinner to physiotherapy. At Grasshoppers, there is more of a family atmosphere than the CTO. Many girls that play in the first team have played for Grasshoppers since they were young, and most of them come from that neighborhood as well.

14.Amazone is a semiprofessional team right now. What does this mean for you?

Besides basketball, I work 32 hours per week. I am a manager at a clothing store in Utrecht. I can combine this quite well with basketball, but I do have to plan ahead. I always work one day in the weekend, and on the other day I have a game.

15. Who is the best coach you have had throughout the years?

I think that every coach who trains you, contributes something in your development as a player. But, if I have to choose someone, I would definitely choose Ray Laatst. He gave me a lot of confidence when I played in the youth of Uball/Amazone, and I developed a lot because of that.

16. What is the best basketball tip you have ever gotten?

Last year, our coach Tilly always said: play with your heart. Even if your shots do not fall, there is never a reason not to work hard for your team.

17. What are your expectations for this season for Amazone?

We are now several games into the season, and I am pleasantly surprised. We have a group of girls that want to work as hard as possible and want to develop their game. I dare to say that the last place in the VBL will not be for Amazone this year.

18. Do you have any personal goals this season?

I definitely want to improve that I can play at a more constant level throughout the games. My personal goal also is that everyone will feel comfortable and at home in our team, especially the younger girls. I hope I can help them with that.

19. You are now one of the veterans of the team. Is this different from previous years?

That is certainly different than the previous years. It is a bit weird to be one of the most experienced girl on the court at the age of 23-years-old. I do enjoy having a lot of young girls on the team.

20. You were 3×3 champion of the Netherlands this Summer. How did you experience this?

3×3 tournaments are always fun to play. Winning the championship was a lot of fun, but it is a pity that there are still not a lot of girls participating in the tournament. Hopefully, with the 2020 Olympics approaching, there will be more women’s teams wanting to join.

21. You also went to Antwerp with your 3×3 team. Was this different than in the Netherlands?

In Antwerp, the level was a bit higher than in the Netherlands, and often there are more teams competing, what makes the competition more interesting as well.

22. You have played basketball in a lot of different countries and locations. What is the nicest location you have ever played at?

You will always have a special memory for every tournament you play abroad. The two tournaments I would choose, would be the European Championship u18 in Romania, where we became fourth. And I would choose all the international tournaments in Sweden, which we participated in with Uball on the first of January.

23. Do you have ambition to play abroad?

Of course, it crosses your mind occasionally, how fun it would be to gain experience and play abroad. But for now, I am not actively thinking about going somewhere.

24. What is your ultimate goal in basketball?

I want to win a big price with Amazone.