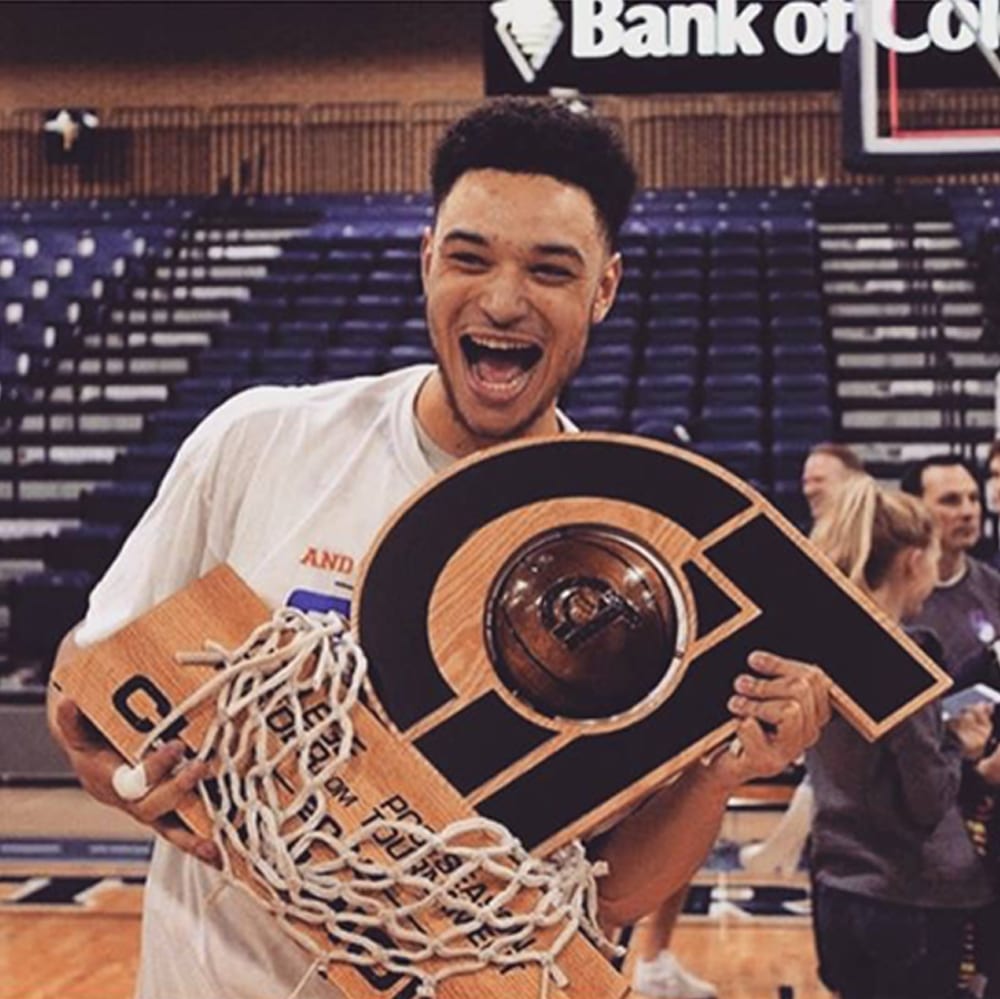 Kai Edwards is a Dutch player, who is currently playing for the University of Northern Colorado. His basketball career started in the Netherlands with BC Apollo, before going to the CBA in Spain. On March 30th, Kai and the Bears won the CIT championship, Kai came off the bench and had a perfect field goal percentage as he was 7/7 from the field.

1. How did you start playing basketball?

I started watching NBA Basketball while I was in my first couple years of high school and really liked LeBron James, he is my favorite player and inspired me to start playing. Me and my brothers started playing on a little court close to our house and we would stay there for hours. That’s how I started and when I was 15 I joined BC Apollo in Amsterdam and started playing organized basketball.

2. You have played for Apollo Amsterdam and CBA, how was it practicing and playing for these teams?

Playing at Apollo was great! Especially since basketball was so new to me, all the players who played there were really good in my eyes and it really took me some time to get used to the level.  Practice at Apollo was really good and I had some really great coaches who taught me a lot. The great thing about CBA was that in Gran Canaria you are really able to just focus on basketball, and practice every day, even twice a day. I had already finished my high school and so I could focus a 100% on basketball which helped me a lot. I wouldn’t be where I am today without either BC Apollo or CBA.

3. What’s the most important skill you’ve learned at CBA?

The biggest skills I learned at CBA is probably my post moves and finishing around the rim. But especially what I learned at the CBA is work ethic and to be able to grind each day.

4. You used to play for Patrick Faijdherbe at Apollo, how was that?

Patrick is and will forever be one of my favorite coaches! It was under Patje that I really took the next step, because it was my 2nd year in the U-18 Eredivisie and we had a very talented team and Patje gave me a lot of minutes and opportunities to play. I really learned a lot from him, and he is also one of the funniest coaches for sure.

5. What makes Spain different from the Netherlands?

I think that basketball style wise the Netherlands and Spain are kind of similar, both have a good skill level. But what I saw as the main difference in Spain was that at CBA we had a lot of size and very tall and athletic players from everywhere across Europe.

6. And the United States?

In the States the game is just way more fast paced and there are so many athletic players. And of course everything here outside of the game is different too. There are basketball courts everywhere, the facilities are great and the stadiums you get to play in are amazing.

7. How did you end up at the University of Northern Colorado?

While I was playing at CBA, one of the former assistant coaches of UNC came by to watch me play in Gran Canaria, and while I was there I got the offer to come play here at The University of Northern Colorado.

8. Since you’ve been in the United States, what have you developed the most?

Probably my physicality, when I arrived here in the U.S. I was about 205 pounds and now I am about 225-230, so you really get bigger here, because you spend so much time in the weight room and the way you eat.

9. Talking about growth, do you follow a specific diet?

During my freshman year I had a meeting with a dietist who took me to the dining hall and showed me exactly what I should and shouldn’t be eating to get the right bodyweight and perform better.

10. Can you describe your normal routine?

During the off-season you go to classes Monday through Friday and usually lift straight after at about 2 p.m. often followed by individual workouts or team practices. During the basketball season, it really depends on when you are playing games and sometimes you will miss school days because your travelling and playing road games.

11. How was the road to the championship?

It was a crazy season, because we lost in overtime in the semi-final of the Big Sky Tournament against Montana the #1 seed after we were up 6 with one minute to go. This was really a heart breaking game, but afterwards we were invited to play in the CIT tournament because of (22-12) record and in this CIT tournament we were able to redeem ourselves and win 4 straight games to bring UNC it’s first post season tournament win. And a school record 26 wins. The final was in our home arena in front of sold out crowd and it was really cool to win it in front of them!

12. Who was your toughest opponent, not only in college but in your whole career?

I think probably the two toughest opponents I faced were Butler University and Arizona University. Both were during my Freshman year and we had to play them at their place. At Arizona there were 14000 people in the Arena and it was a really cool game to play in.

13. What is your playing style?

I play center here at UNC and mainly rebound and run the floor, I finish well around the rim.

15. What is your biggest strength on the court?

I don’t really have a go to move, but when guards find me I try to go up and quick finish.

The Miami Heat. Just when I started watching basketball, we went of a family holiday to Florida and we visited the Heat stadium and I loved it. They had some great players like D-Wade and then LeBron and Bosh went there too which was great of course as a Heat fan.

19. Is there a play in your career that stands out to you?

In the final of the CIT Tournament game, I got a pass from JD, our point guard, and dunked it. Later in the game, this play got chosen as the Play of the Game, plus we won the title so it was a extra special.

20. What’s the best basketball advice you’ve been given?

There is a lot of great advice I have been given, but something that is really important which coaches have told me is that when you miss a shot or a free-throw, instead of thinking about that miss or that play, move on to the next play.

I would love to play professional for a couple years. Of course the NBA is the dream, but I would also really like to play in a good competition somewhere in Europe.

22. You’ve got a little brother playing in the Under 18 team of Apollo, is there a bit of rivalry between you two?

Yes, Jesse. He has really gotten so much better over the last few years. Me and my older brother Rens used to be able to beat him fairly easily on the playground. But now he has out grown both of us and is a real problem on the court. Back in the day their of course was the normal brotherly rivalry, but now it’s all love and I hope he achieves the very best! He is crazy talented and is becoming a really good player.

23. What do you miss in The Netherlands?

Just everything, I always miss Amsterdam and all my friends there, and my family of course. Certain types of food you just only have in the Netherlands, like a ‘kapsalon’. I definitely will always miss that kind of stuff out here. And many more little things. I also miss playing at BC Apollo, but I will be there this summer to workout for sure.

Hopefully playing somewhere either in America or in Europe as a professional basketball player!