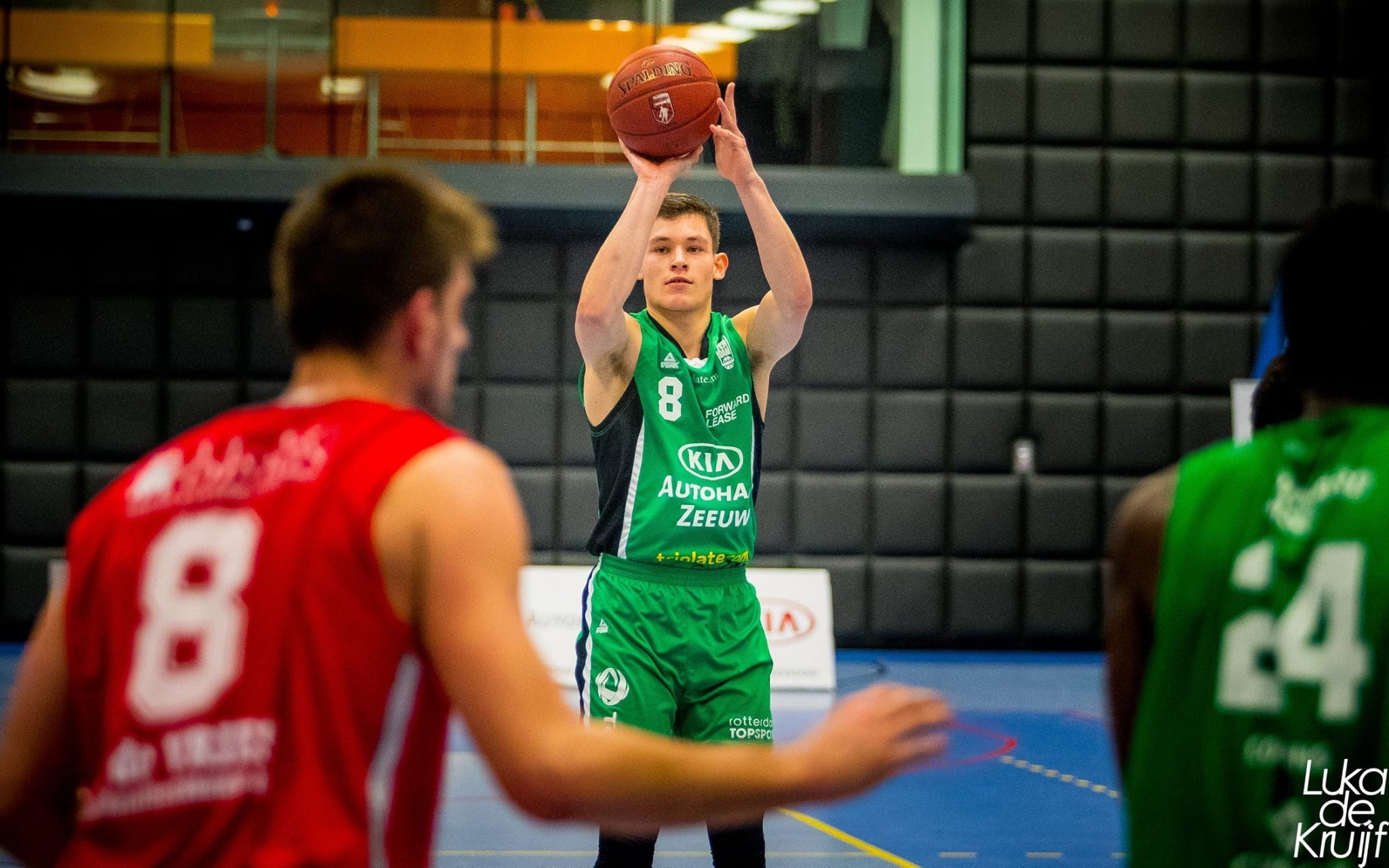 Maik Bouwer is a young, talented player, who plays in the DTL and DBL team of Rotterdam Basketball. Besides that, he is also a Dutch youth international, both 5×5 and 3×3. Last summer, Bouwer won the silver medal at the 3×3 European Championship u18.

I started playing basketball because both my parents were playing. I always went to watch my father’s games and I really enjoyed watching them. Then, I decided to start playing myself. That was when I was 7 or 8 years old.

When I get the ball and I’m open I take the shot. Otherwise, I make a fake and drive to the basket.

3. What can your sister teach you?

At home, we talk a lot about basketball, so we learn from each other. Sometimes, if she has seen one of my games, she gives me tips afterwards and I do the same for her.

4. What’s it like for you that your sister, Robyn, plays basketball at a high level as well?

That’s special. We’re both very fanatical and critical, but we both express it differently. My sister is much more expressive and I’m a lot more introvert. But, because of our differences we’re able to help each other.

5. Did you have to quit something when you were younger because of basketball?

My parents have always ensured that there were a lot of possibilities for us, and still are. I did quit playing tennis at a high level, because I could no longer combine that with basketball. My whole life, I’ve had friends who, like me, practice a lot, both at Rotterdam and the Dutch national teams, so it doesn’t feel like I had to give up anything. 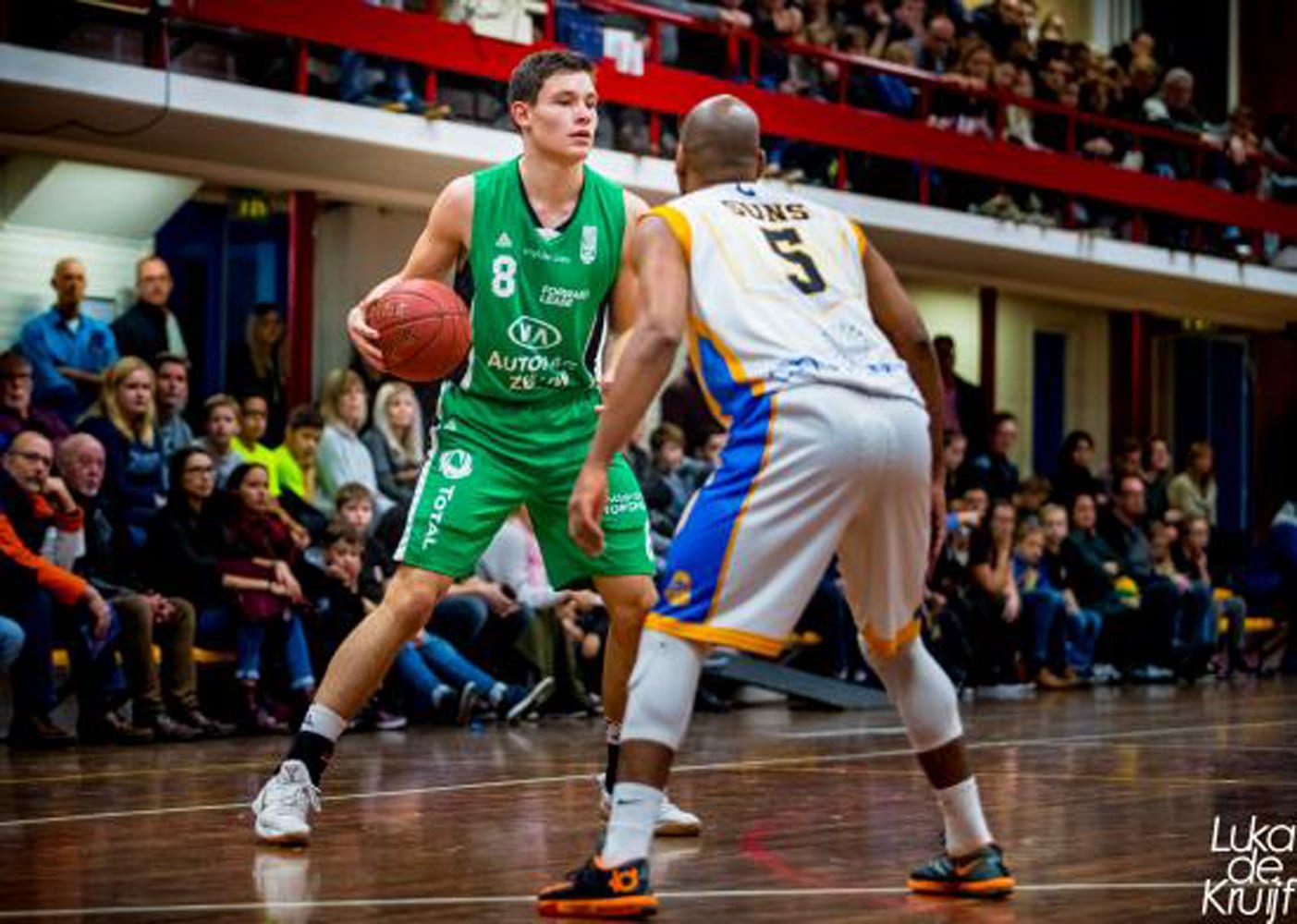 6. Why did you choose to stay with Rotterdam, and not go to a CTO or RTC like your sister did?

At Rotterdam, I’ve been trained very well, learned from a lot of different trainers and I’ve always had the chance to practice and play with higher teams. Furthermore, I got the chance to practice with the Men’s 1 team at a young age. Even now, I learn a lot by practicing and playing with older guys and foreign players.

7. What’s your view on young Dutch guys going to a high school in the US to play basketball?

Everyone makes their own choices. I’ve thought about it, but I decided to finish my school in Rotterdam first. I hope to finish that before the Summer.

8. Last Summer, we saw your great dive at the end of a 3×3 match. Are you always that calm in the last few seconds?

Yes, it was fantastic that we played in the final of the European Championship. I’m always someone who stays calm and can continue to oversee the situation. I think that’s also one of my qualities.

9. You play both in the DBL and the DTL. What is the difference between those competitions?

In the DBL, everyone plays more physical. There, I practice and play with older, stronger and foreign players, and it’s mainly learning and gaining experience. In that team, I’m playing more in service of the other players. I do notice that I’m getting stronger and I’m allowed to make more and more minutes.

I don’t really need to change my game. In terms of position, in the DTL, I play several positions, because I’m also one of the tallest players on the team. In the DBL, I usually play on the forward position, which is also more my position internationally. Sometimes, it can be difficult defensively, because you have to play more physical in the DBL, but you’ll get a foul for the same action in the DTL.

11. What do you need to improve in order to completely make the step to the DBL?

I’ll have to play with more confidence. With more experience, that’s going to be all right.

A few years ago, we signed up for the first 3×3 competitions that were organized in the Netherlands. Especially, because these were organized outside of the seasons and we could play outside. One thing led to another.

The best moment was probably last summer during the European Championship. In the semi-final, I scored the winning point in the very last second, which brought us to the final. As a team, we really fought our way through the tournament. Eventually, we won the silver medal. It was especially great that I was chosen for the All-Star team.

14. What the most difficult aspect of 3×3 basketball?

The hardest part is that you only have a short amount of time. If you don’t start sharp, there is little time to recover. And that’s also one of the nicest things of 3×3 at the same time.

There are several differences; 3×3 goes faster, you play outside where weather conditions play a role and the rules are different than 5×5. Team play is incredibly important; because it goes so fast you’ve to know each other quite well, and make tactical choice, so you’ll know exactly what to do and can trust each other. Only then you can play at a high level. Another thing that I like about 3×3 is that you can’t be coached during the games.

For me, I think there’s no difference in what suits me better. The last few years, I’ve noticed that I can do both at the highest level. I am convinced that 3×3 contributes to your skills to become a stronger and more complete player for 5×5 as well.

16. What’s it like to play for a Dutch national team?

It’s simple an honor to be able to represent your country and it’s one of the most beautiful experiences for me so far, both at 5×5 and at 3×3.

17. How did you experience playing against the best players from other countries?

It’s one of the best learning experiences to be able to play with and against the very best players. And you also get new contacts around the world. You don’t see each other often, but in the Summer, if the international tournaments, European Championship and World Championship are played, both 5×5 and 3×3, you see a lot of people you know.

18. What’s the most important thing you learned in these international competitions?

Internationally, everyone plays more physical, even at a younger age. I’ve also been able to play for the Dutch National Team every summer, so I was also stronger at the start of every competition in the competition.

19. What’s the most important thing for you in a game?

Ultimately, the team result is the most important.

20. Do you have a basketball idol?

22. Do you have a favorite pair of basketballshoes?

Nike Kobe10 All Star Edition is my favorite! On these shoes, I played my first 5×5 European Championship and that’s where it all started for me.

23. What’s the last playlist you’ve listened to before a game?

My self-compiled playlist. With artists such as Drake, Post Malone and Future.

24. Where do you see yourself in five years?

After I’ve finished my education in the Netherlands, I would like to play abroad. If I get a good offer, I will definitely take that opportunity.

One on One with Rowie Jongeling