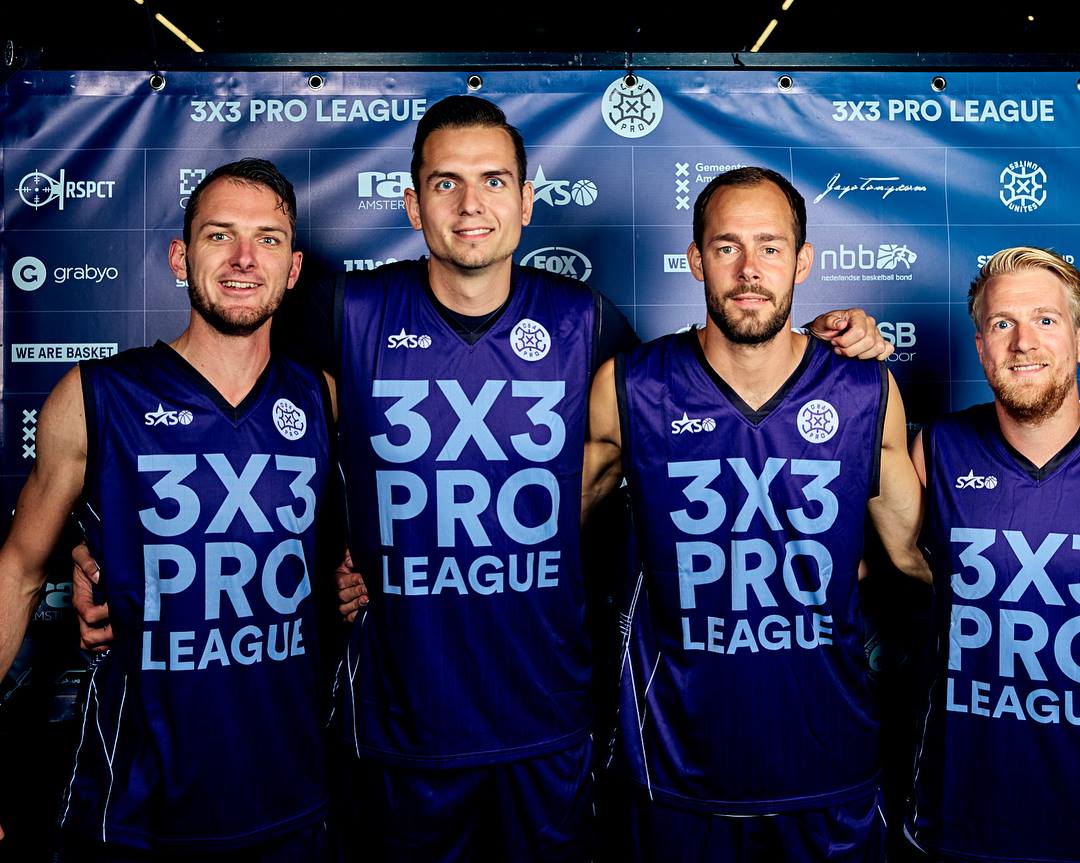 New King of the East

This weekend was the first tournament of the 3X3 PRO League, a league that is going to help Dutch 3X3 players to improve their skills, compete with other high level 3×3 players and ultimately will help Dutch players to get to the 2020 Olympics in Tokyo.

Jesper Jobse was one of the first Dutch players that started to play 3X3 basketball at the highest level, and is now part of a team that belongs to the top of the World. There are only two years left until the Olympics, and its key to remain at this high level and keep improving their game. Therefore, Jobse decided to co-organize the Netherlands’ newest professional 3X3 league: the 3X3 Pro League.

Why did you start to play 3×3 basketball?

That’s a funny story! I remember that I had a bad season in the DBL. I lost the fun in playing basketball a bit that year and I was a little dissatisfied. Then, I read an ad that the Dutch Basketball Association was looking for players for the World Cup 3×3 in Moscow. This was in May 2014. I remember that I was doubting whether I would go to the try-outs or not. But, because I lived in Amsterdam, I got my bike and went to the practice. Three weeks later, I played in a World Cup for the first time!

What makes it fun for you?

3×3 has turned my life upside down. I can name 100 things that make it so enjoyable for me. All the elements of the sport make it such an incredible experience for me. The short games and several games on one day, you have to take full responsibility on an off the court, but also all the trips around the world and meeting so many people with the same passion makes it fantastic.

You’ve experienced the entire development of the sport. Now, it has become an Olympic sport, but how was it all the way at the beginning?

In the beginning, it was quite chaotic and it was still really streetball. We played on squares in the bad neighborhoods of Singapore and Latvia, and we had to pay for all our travels ourselves. Spending 500 euro on a ticket and getting eliminated after two 10-minute games in the pool phase are not the most fun experiences, I can tell you. Yet, it’s precisely these experiences that ensure you have the qualities you need as a person to perform in this sport. Looking at others doesn’t work. You have to do it yourself, both individually and with your teammates. that’s the only route to success.

You travel with the same players a lot. How does that work?

We make the agreement beforehand, that we almost have to be able to sleep together to become a good 3×3 team. You won’t go to be by yourself fast. Actually, you’re constantly with the entire 4-man team. This means flying together, having breakfast together, having lunch together, having dinner together, celebrating a win together, being together after a loss, telling each other the truth when things need to improve, but also offering each other support when someone needs it. Because we’re only there with a small team, it makes for a closer connection between us. Sometimes, we’ll have nothing to say to each other for a couple of hours, and we all watch a TV show, but most of the time, we have a lot of fun and remember that it’s really special that we can do this together.

How important is experience in a team?

Experience is very important! You can have as much talent and potential as you want, but if you can’t adapt in the middle of a game, you’re not going to make it in 3×3. It’s a different game than 5 against 5. I’m convinced that almost every top player is able to make the transition, but only if you actually approach it as 3×3. You have to be able to subordinate yourself to the team, put your ego to the side, and find out with your teammates where your qualities lie within the team. The moment the machine starts running, you feel the power increasing, and you even feel that you can be the best team in the World.

How are you regarded internationally?

At the moment, we really are one of the best teams in the World, and that is how we’re seen. There’s no team that thinks they’ll have an easy game against us. We are feared in the international field because of our defense and dynamic way of playing. It’s very cool to see how the respect for our team has increased over the years.

Do you feel that the next generation is on your tail?

I’m not really bothered by that. I know I’m 33 and I won’t be doing this for many more years. I’m proud that we once started this and that boys are now joining, that way, we hopefully can be leading in 3×3 for a long time! Of course, it’s also very nice to put those young, energetic, but sometimes still really ignorant boys in their place.

What has to happen for you to be able to beat Serbia?

The most important thing is that we get more teams at a higher level. Serbia has four teams in the top 10 of the world, we got only one. That competition between the Serbian teams ensure that the team are always on edge. In addition, basketball and certainly streetball are a huge part of the culture in Serbia. The fact is that we’re catching up with them, and the gap between us isn’t getting bigger. We are getting closer.

How real is it to dream of the Olympics?

That dream is very real. People have called us a one-day-fly so often, and it’s been said so many times that countries will only take it seriously the moment it becomes Olympic. It has been an Olympic sport for a year now, and we’re still there. We’re doing better than ever and we’re two years away from the Olympics. Step by step, and ensuring that we do what we have to, and we’ll make it to the Olympics.

If I’m going to make it there? I’m not dazzled by it. Of course, it’s the highest possible to achieve for an athlete. I have that dream as well. I know I will do everything I can to be there.

I advise children to enjoy basketball as much as possible. Clubs have always been important in my life. They always provided me a save environment where I could be myself. I think clubs are a very important part of the society. So, sign up for a club and play 5×5 basketball.

On the other hand, 3×3 has taught me a lot as a human being. I have developed myself a lot while doing so. That is because you learn to take responsibility in a lot of situations. On, but also off the court. That is unique for this sport. So, you’ll have to discover both worlds and make sure that both worlds help you to become a better basketball player who experiences the maximum amount of enjoyment every day.

The ideal 3×3 team has open communication. Ego’s will have to make way, and the team always comes first. Besides that, you have to dare to make decisions as a player, dare to take your responsibility in offense and defense, and have all-round skills. In addition to that, it’s not easy to be able to compete as a very small or a very tall player.

How did the idea for the new competition, 3×3 Pro League, came to be?

Sometimes, taking responsibility goes a bit out of control. No, just kidding! I always have the urge to make a difference somewhere. Where do you do that? The best thing is to do that, there where you’re influential. I started the foundation 3X3 Unites with Mark Schuurman in 2016 by doing social projects throughout the Netherlands as well as abroad surrounding 3X3 basketball. I get a lot of energy out of this, because I literally experience what impact sports can have in the life of a young person. I can tell what I have learned myself and I’ve noticed that they can get something out of it.

Last summer, the feeling came to be that I wanted to something for the top as well. That meant organizing something unique that has never been done before. We started doing this with five passionate people. Sometimes, we almost seemed crazy, but it turned out to be impossible to let go of that dram. Now that the PRO League is here, it makes me very proud!

What is the goal of this new competition?

The big goal is to get the Netherlands to the Olympics and to get as many good players as possible to join. The 3X3 PRO League has to be a new kind of standard, with which we can show people in the Netherlands, but also the rest of the World, what potential this sport has.

How did you assemble the teams?

The teams are assembled by appointing Team Captains, 8 players with a bit of a reputation, who we would like to see play in the PRO League, were given the chance to put together a team. Exactly as is in the DNA of 3X3. It’s very cool to see that the players take that responsibility. Then, there were 4 spots out of 12 left. Another important part of the DNA comes from the slogan: From the Streets to the World Stage. In other words, everyone should get the opportunity to be able to play at the highest level. We came up with a qualifying system that allowed 4 other teams to qualify themselves via the existing Streetball Masters Tour. This turned out to be a great success!

How did the first weekend go?

As an organizer of an event, you’re never satisfied. Especially if you’re, like I was, a player and a co-organizer. We definitely organized something unique. That the players loved it as well, and joined too. We’ve now solved all small problems! We want to give the audience a special experience and therefore want everyone to come and watch a basketball spectacle next Saturday and Sunday between some of the best basketball players in the Netherlands.

Carmelo Anthony – What’s the next step

New King of the East