Tim Coenraad is one of the 3×3 players that will represent Australia during the upcoming 3×3 World Cup in Amsterdam. His team grabbed one of the last tickets for this World Cup by winning the Asia Cup on May 26. Coenraad was very important during that game, as he scored 8 points, and made the game winner.

What was the first 3×3 tournament you’ve ever played?

I played in a Pro-Hustle in Sydney on a team with only 3 players. We beat some good teams but ended up being eliminated in the semi finals by a few guys that I’m playing with in the Australian team now (Tom Wright & Andrew Steele)

What is your biggest strength on the 3×3 court?

I would say my outside shooting and my basketball IQ. You have to play smart and attack the areas that you believe you will be successful. You need players that can think the game and make reads while still competing at a high, physical level.

Do you have to play differently if the game is played outside, as the elements come into play? Or isn’t that something you think about?

A lot of the time the whether plays a part, wind and the sun have been the 2 biggest factors for me so far. I have a high arc on my shot so it tends to get caught in the wind. And sometimes the sun will be in your eyes on certain parts of the court so we try to run shooting plays from the opposite side.

You need a leader that is usually the guard on the team that can get to the basket and hit the outside shot but can also handle himself inside (Tom Wright). You need a hustle guy that can get you extra possessions, get your shooters open and set good screens (Greg Hire). You need a shooter than teams simply cannot leave open but is also strong inside (Andrew Steele) and you need an inside warrior than can seal under the basket, Rebound and post guys up (Lucas Walker).

How difficult was it for you to make it onto the Australian 3×3 squad?

The main focus for Australian basketball right now is the 5 on 5 game. Our coach selected players for a 3×3 Australian camp based on what he had seen of them in the past and their potential to play 3×3. Many great 5 on 5 players would struggle in 3×3 due to the physical nature of play. The camp was very difficult and very physically demanding. Being able to play hard and then back it up in a short period of time is important in the 3×3 style.

A lot of 3×3 players have a nickname. Do you already have one? How did you get it?

I do have a nick name that wasn’t recently given to me, however it’s an adults only nickname so you’ll have to check out Greg Hire’s twitter account for an idea. 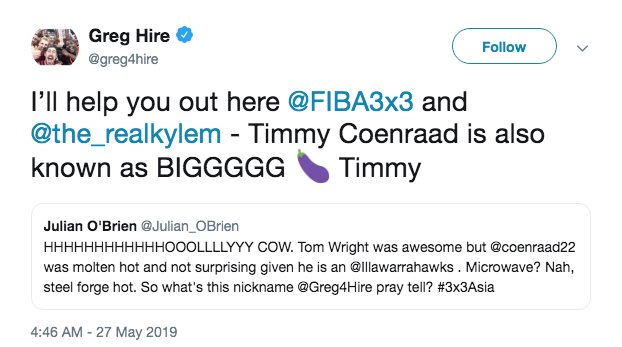 Why did you decide to start playing 3×3 professionally? Was it a new opportunity, or did the Olympic status of 3×3 have something to do with it?

I was invited to play in a tournament in Sydney last year and immediately got hooked. Then I heard it was being I included in the Olympics and that it has a world cup and an Asia cup. At the time I has never represented my country and that was always a dream of mine, so this was a way to accomplish that goal in a sport that I thought really suited the way I play.

Dutch College Players to Watch in the Upcoming Season

How do you see your chances to reach the Olympics next year?

It can be done. As a nation we are only ranked 24th so we’d have to crack at least the top 20 to be able to earn a qualifying bid that way. As I understand it, the top 3 teams from the world cup will earn a chance to qualify for the Olympics so that just provides some extra

You won one of the last World Cup tickets, and you played a huge part in securing that win. Were you in any doubt about getting that ticket?

There was definitely some doubt, not in my team mates abilities or commitment to the team but our lack of experience. Some of the other countries have been playing 3×3 for a lot longer and have played many more games, so I knew we’d really have to come together as a team of we were to qualify.

Does it make it any more special that the women’s team made it to the World Cup as well?

It’s great to have the women’s team qualify as well. We’ve developed a strong bond amongst all the players and we feel like one big team. It’s great to be able to celebrate each other’s success and support each other where we can.

What are your expectations for the World Cup in Amsterdam?

I’d rather other people place expectations on us in terms of where we should finish. The only expectation that I have is for our team to play at the highest level we can. If we play to our strengths, if we play as a team, if we play hard and smart, everything else will take care of itself. Whether that means winning the cup or finishing last, that’s all you can ask of one another.