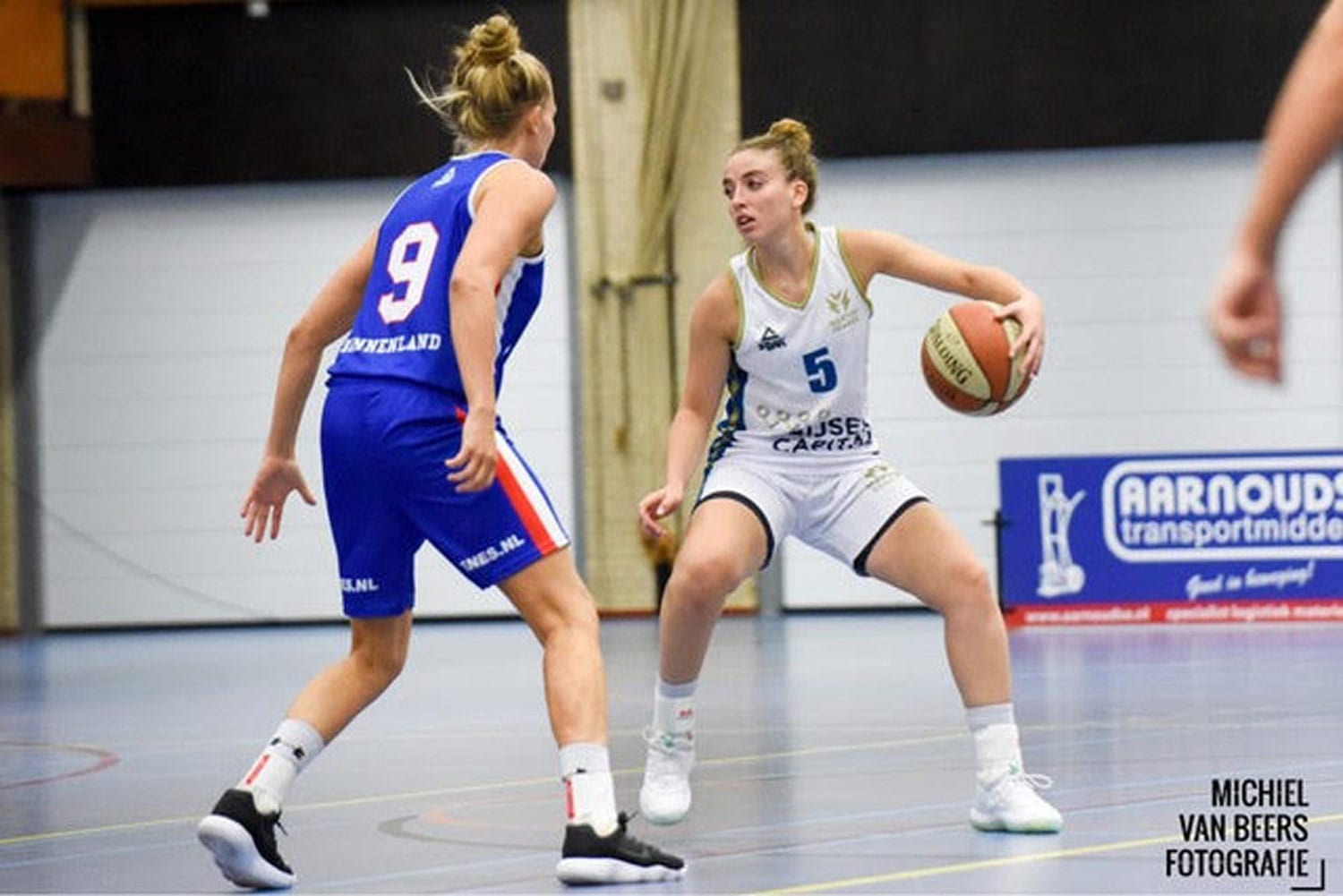 Many people know that basketball is a very popular sport in the North of the Netherlands, especially in Groningen. This article is all about Haren, a village located near Groningen. We talk about Harener Sport Vereniging Basketball, also known as HSVB.

One of the board members of HSVB is Margo Koning. She speaks with a lot of enthusiasm and passion about HSVB. “Like many other basketball-organizations we emerged from an omnium-sport organization. We are solid and cozy-minded, with mainly young members,” according to Koning. “We’ve got about 170 members this season, which means 10 teams that play in many different competitions. Also we are very proud of our wheelchair team, that is playing very successfully in a German competition.”

HSVB is more than just a basketball organization. A combination with pride and passion makes the organization grow and represent something. As Koning says: “Our primary goal is to provide basketball in the North, with focus on (the surroundings of) Haren. The most popular sports in Haren are soccer and hockey. We constantly compete for the attention of young children and their parents.”

“We are a small organization, which makes it more difficult to face setbacks. For example: our men U16, who played in the 2nd division last year, were not placed by the NBB in the 2nd U18 competition this season. The result: the team fell apart, talented players moved to other organizations and sponsors lost interest. For a small organization like ours the consequences are really huge. It should never be a problem: if a team develops so hard and has to play in a higher (of age) competition, they should never have to be confronted with a ‘no go’.” 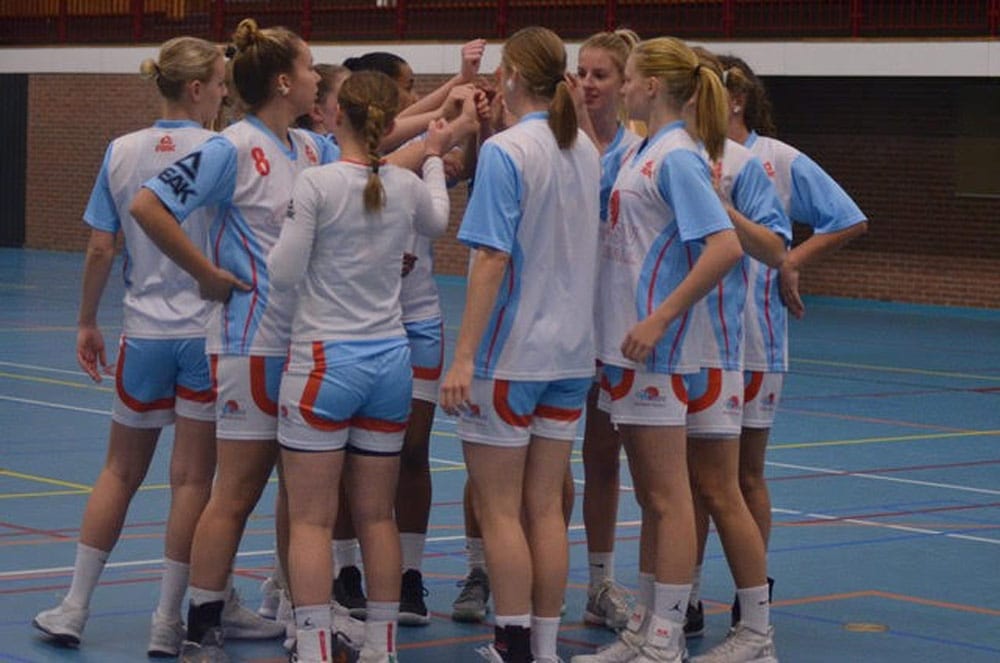 “We have to move on. With lots of volunteers we work hard to develop our members and teams. Our values are: ‘fun’, ‘together’ and ‘battle’. We always reflect the things that we do to our values. Sometimes that means that we have to say goodbye to somebody and sometimes it means we can receive new volunteers, because they feel the vibe of how we work. And we have to be patience.

For example, this season we have a ‘development team’ for our younger female players (woman under 18). It was a choice not to compete directly at the highest level. By using a well thought practice and development schedule, we think that most of the players of this woman U18 team will play at the highest level next season. We therefore hope that (the system of) the NBB will facilitate and stimulate this kind of development. If this team signs up for the national competition they certainly need to be placed. This is a struggle, because we are dependent on random choices of people who do not know our future plan(s).”

The big fanbase of Donar Groningen gives HSVB the feeling that basketball in Haren is also a big sport. “We are very proud that we still exist and that we work together as a team,” Koning says. “There are no big problems or scandals within our organization, and that’s why we are known as an appropriate basketball organization. Our goal is to have more than one team within all age categories.”

“Besides that, we want to have trainers and coaches who also want to educate teams from other levels than only the highest; coaches who know that a level below the highest level is maybe even more important. For example: last yearwe had two coaches with much basketball knowledge on our men U16 2nd division. They also had to face a big disappointment, just like us (not to be placed in the 2nd division men U18 to grow on).  Nevertheless, they chose stay and help us to train our men U14, just because they feel at home at HSVB. We are very proud of that: this is what HSVB is all about. 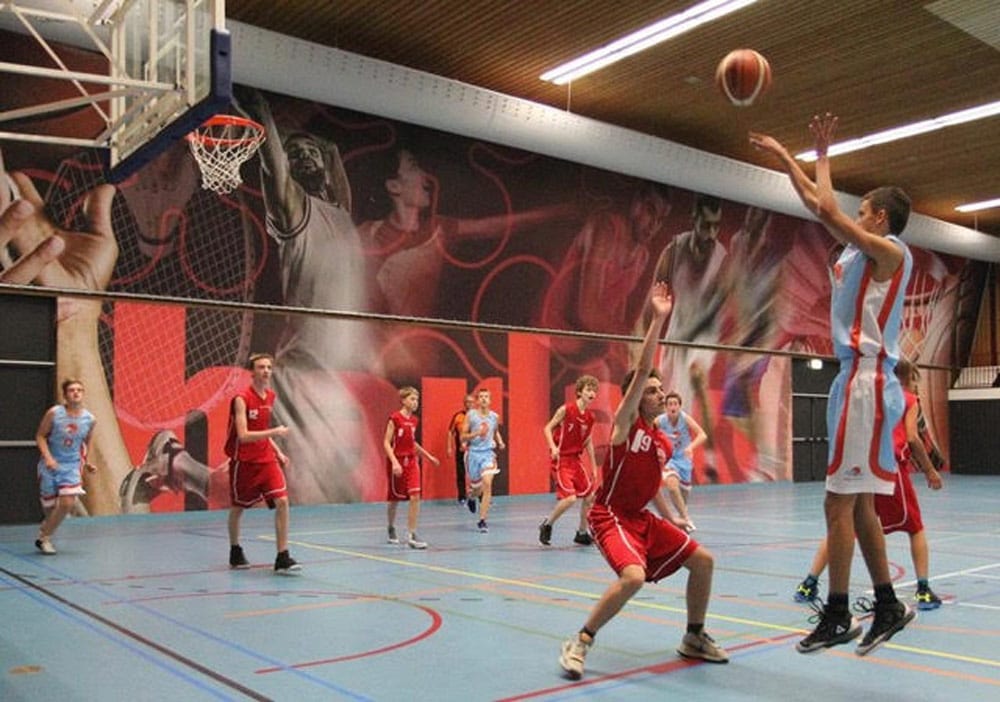 HSVB in the Woman Basketball League

Since last summer, HSVB joined the highest league for women: the Woman Basketball League. They are called ‘Keijser Capital Martini Sparks’. Koning: “It has been a dream for many woman in the North to play in the highest league in the North of the Netherlands. Last summer that dream came true! We worked for more than three years, together with an enthusiastic group of volunteers. Connections with sponsors, schools and other stakeholders in our society helped us to make it possible to achieve this. It’s very nice for our volunteers to notice that there’s a lot of support coming from many basketball minded people in the whole country.”

“Because Martini Sparks just started this season, it won’t be too easy for them, but we will keep building to keep our fundament strong and steady. So that we can give the many talented women in the North a chance to play at the highest level ánd to continue studying here (also in the future). And next season we hope to really compete in the top of the Woman Basketball League. No short time success but a structural approach with sustainable results. Above all we have to stay focused on the technical development within all our teams!”