You might have seen Washington Wizard Kelly Oubre Jr. wearing an immense Supreme logo on the court a while ago. Oubre was wearing the Supreme shooting sleaves that were made in collaboration with Nike and the NBA, and so the Supreme logo made its way onto the basketball court. But how did Supreme become a billion-dollar brand and a hype, especially amongst a younger generation of streetwear lovers?

Supreme was established in New York City in 1994 as a skateboarding shop and clothing brand. In the same year the first Supreme store opened its doors on Lafayette street in downtown Manhattan. It took a while for the brand to expand and Supreme opened the doors of its second store only ten years later in Los Angeles. Today, Supreme has 11 stores across the globe, regularly overshadowed with lines of hypebeasts waiting to buy stuff from the latest drop. 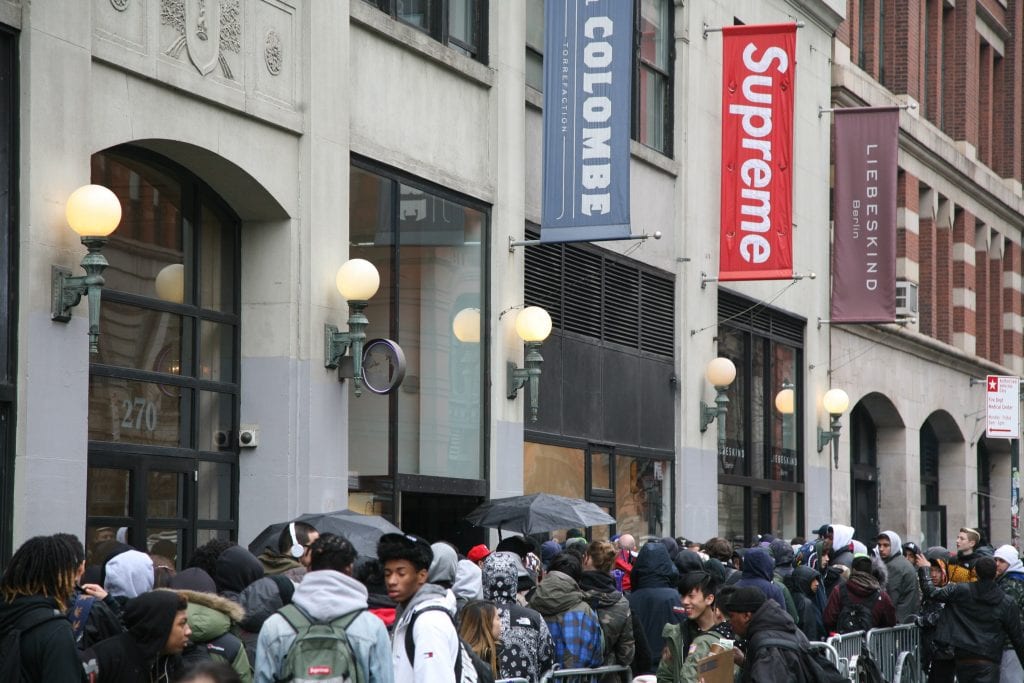 When you say streetwear, you almost immediately think of Supreme. One thing that is part of the success behind the brand is the exclusivity. The way Supreme works is with a system of regular ‘drops’, with only a certain amount available per piece. When I visited London last March, I accidentally came by the Supreme store. There was a huge line outside, so I knew there was a new drop in stores. 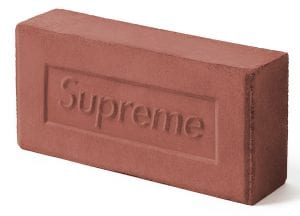 These lines are typical for Supreme, and mostly consist of really young hypebeasts, waiting to spend more money on Supreme than I can spend in a whole month. Rarity and scarcity know how to persuade us into buying things time after time. These hardcore fans know no better and are in line again and again, eagerly waiting to get their hands on another simple hoodie with the brand’s box logo. Or a brick with a Supreme logo. You know, always useful to have….

Sometimes, the drops get so hectic that even the police have to be involved to keep the order. Fashion surely does make us do crazy things.

Supreme’s items are also popular items to resell, with the selling price considerably higher than the original selling price. This also makes the items worth more than what they originally were. Imagine buying a hoodie for 100 euros, with it later being worth up to designer prices. You’d probably feel like a fashion hero yourself too 😉 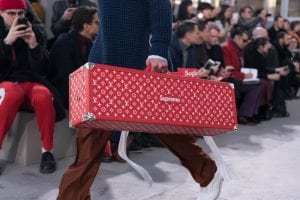 Last January, it was announced that Supreme would be collaborating with designer brand Louis Vuitton, and the whole fashion world was in shock. How could such a high-end, well-known brand decide to collaborate with a streetwear brand like Supreme? Looking back, the collab was a huge success, with items barely hitting the shop floor before they were out of stock (which was no surprise for a brand like Supreme).

Over the last years, Supreme has become a huge part of youth culture. They haven’t changed much in the way they are doing things, but they know how to sell out of items every time again. Because of its huge success and the collab with Louis Vuitton last year, more and more high-end brands consider collaborating with the brand, like Rolex.

It’s safe to say that streetwear and Supreme go hand in hand. And with streetwear becoming a more important part of fashion, Supreme is growing along with the trend, becoming a billion-dollar brand.