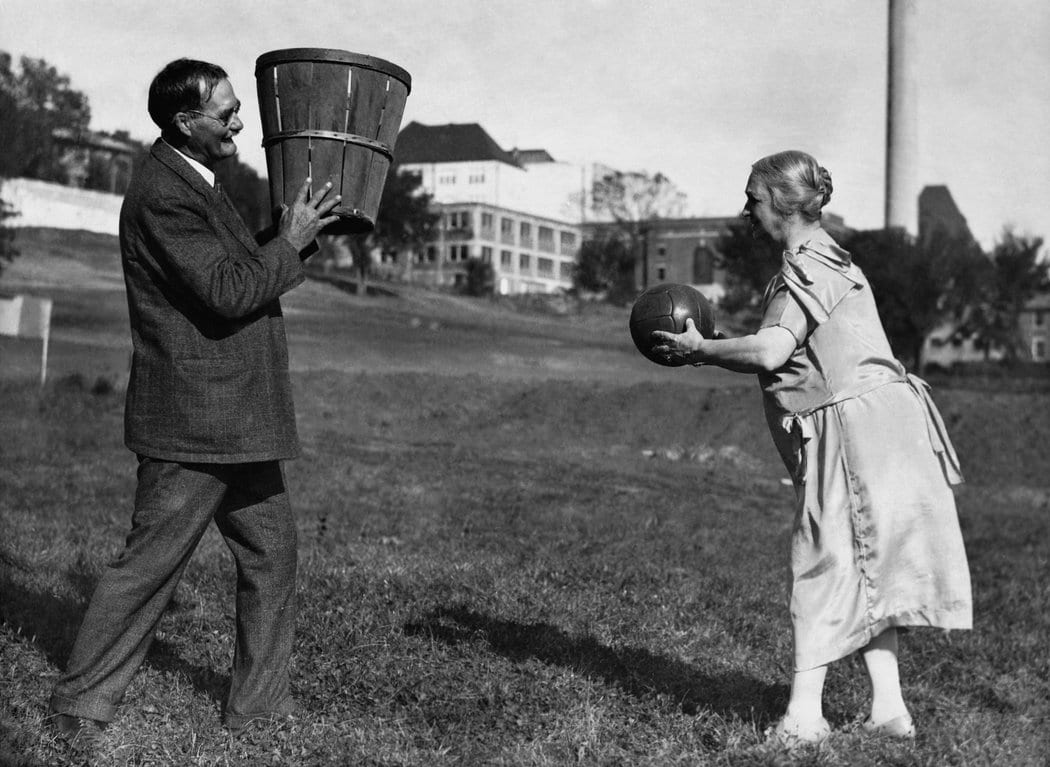 In 1891, a man called James Naismith was given 14 days to create an indoor ‘athletic distraction’ for a rowdy class in New England, because it was too cold to go outside. Naismith came up with ‘Basket Ball’, which lead to our modern game of basketball. But, in what way do the rules he came up with differ from our modern day rules?

Naismith’s original game of ‘Basket Ball’ was quite a bit different than modern day basketball, as he divided his class up in two team of nine players. The baskets were actual fruit baskets that were hung on the side of the gym balcony. Every time player would score, the game had to be paused, so someone could get the ladder to get the ball from the fruit basket. In total, Naismith came up with 13 different rules, that, in their own way, are still very similar to modern day basketball.

1. The first one, quite a simple rule, was that the ball could be thrown in any direction, with one or both hands.

This rule is still the same now, and has never been changed.

2. The ball may be batted in any direction with one of both hands (never with the fist)

In modern basketball, batting is called dribbling and that is, of course, still allowed in today’s game. There has been a slight chance in this rule, as dribbling with both hands at the same time is no longer allowed (second dribble). It is also still not allowed to touch the ball with your fist, but this is only a violation, like travelling, and not a foul.

3. A player cannot run with the ball. The player must throw it from the spot on which he catches it, allowance to be made for a man who catches the ball when running at a good speed if he tries to stop.

These days we call it traveling if a player walks with the ball without dribbling, but the rule is still the same.

4. The ball must be held in or between the hand; the arms or body must not be used for holding it.

This is no longer a rule today, as long as you do not hold (or touch) the ball with your feet, or legs, it is allowed.

5. No shouldering, holding, pushing, tripping, or striking in any way the person of an opponent shall be allowed. The first infringement of this rule by any player shall count as a foul, the second shall disqualify him until the next goal is made, or, if there was evident intent to injure the person, for the whole of the game, no substitute allowed.

In today’s game, it is still not allowed to do any of the things mentioned above, but the consequences are different than what Naismith had written down first. There is no longer a time penalty after a player makes his or her second foul. Naismith did already think of a form of penalty for a severe foul, the disqualifying foul.

6. A foul is striking at the ball with the fist, violation of Rules 3,4, and such described in Rule 5.

This is a bit different now than when Naismith thought of the rules. The violation of rules 2 and 3 only means that the other team will receive the ball, and rule 4 doesn’t apply to the game anymore.

7. If either side makes three consecutive fouls, it shall count a goal for the opponents.

This is not a rule that is still used in today’s game.

8. A goal shall be made when the ball is thrown or batted from the grounds into the basket and stays there, providing those defending the goal do not touch or disturb the goal. If the ball rests on the edges, and the opponent moves the basket, it shall count as a goal.

Though this is a bit different nowadays, partly because there is an entire different sort of basket than Naismith once used, the rule does sound similar to the rule ‘basket interference’, which is a rule that is definitely used in today’s game.

This inbounds rule is still partially used in today’s game. In case of a dispute, the referee doesn’t throw the ball on the court, but there will be a jump ball or an arrow deciding which team gets possession of the ball. Furthermore, the five second rule is also still a part of today’s game, but a player doesn’t receive a foul if he/she violates the time limit. Taking longer than five seconds is a disadvantage for that team, as they will have to give the ball to the other team.

10. The umpire shall be judge of the men and shall note the fouls and notify the referee when three consecutive fouls have been made. He shall have power to disqualify men according to Rule 5.

This differs quite a bit from the modern rules, as there are now two persons, who are sitting on the sideline, that keep track of the fouls, scores and time. In Naismith’s time, there was one referee and one umpire, and then the ref had to keep track of the amount of scores made. Now, the referee only has to ref the game and keep track game and whether the players violate any rules.

11. The referee shall be judge of the ball and shall decide when the ball is in play, in bounds, to which side it belongs, and shall keep the time. He shall decide when a goal has been made, and keep account of the goals with any other duties that are usually performed by a referee.

12. The time shall be two 15-minute halves, with five minutes’ rest between.

The amount of minutes differs a bit from Naismith’s original rules, but in modern basketball the amount of minutes also differs per country and competition. A normal game in Europe has 10 minutes per quarter and 15-minute rest between the halves. In the United States, College player play two 20 minute halves, while NBA players play four quarters of 12 minutes.=

13. The side making the most goals in that time shall be declared the winner. In case of a draw, the game may, by agreement of the captains, be continued until another goal is made.