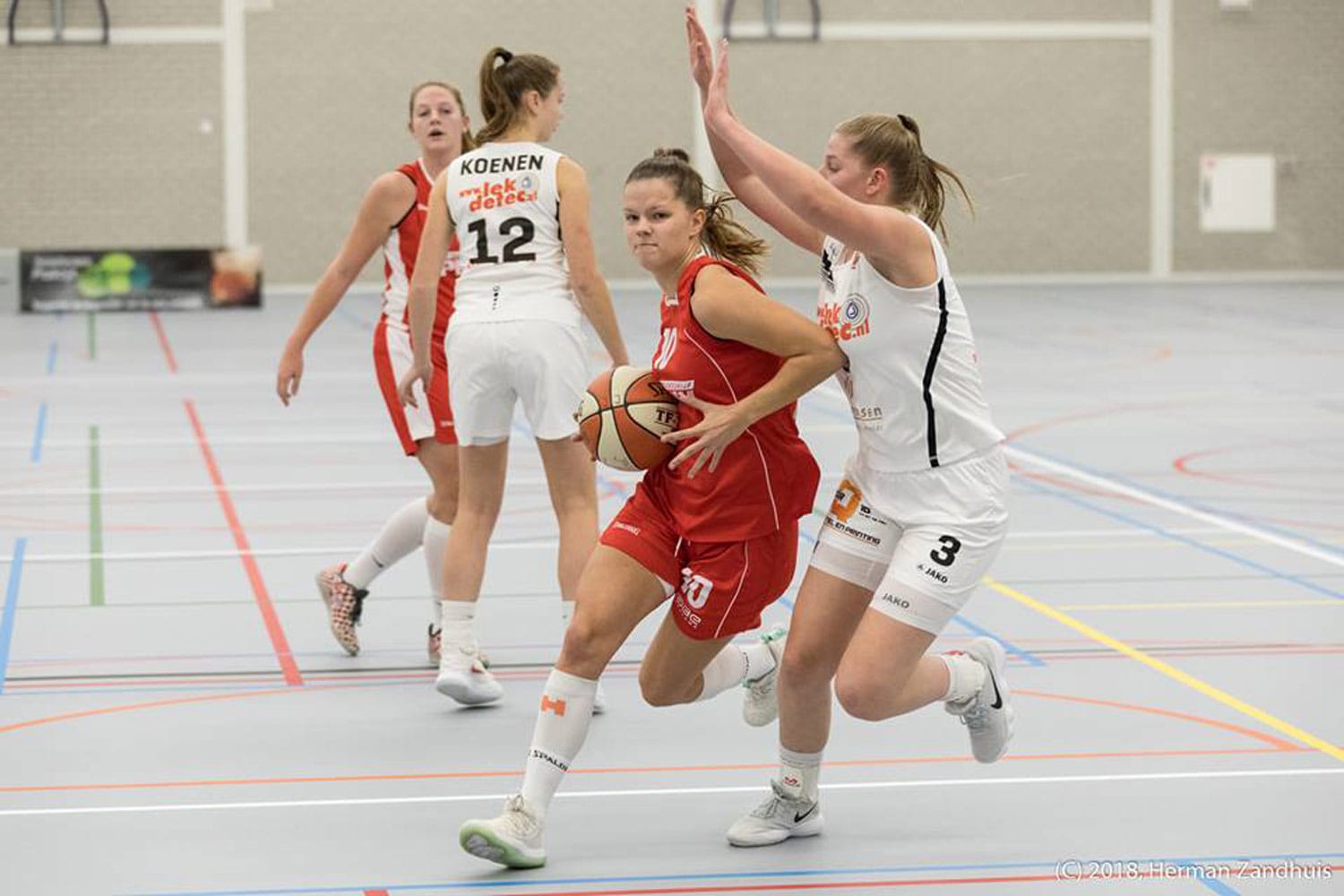 One on One with Roos Koopmans

It’s a quiet, small and cosy place in the Netherlands, but they do have a basketball team, which is quite successful. This organization, called Jolly Jumpers, was founded almost 50 years ago. In this article, chairman Hilde Berning-Everlo, Huub Frons and coach Annelies Bussink will tell you all about Jolly Jumpers.

The history of Jolly Jumpers

As said, basketball in Tubbergen has existed for almost 50 years now. A lot of things have happened as the years passed by. “Jolly Jumpers was founded at 1 August 1969 by Ge Westgeest,” according to Hilde. “He was a teacher for PE classes. They played basketball a lot of times during PE class back then. All his students were so excited, that they want to practice at 7:00 am before school started. His basketball team promoted every year to a next level, and 4 years later they played at the highest league of the Netherlands.” Huub Frons was a former board member.

He knows a lot of the meaning of Jolly Jumpers. “Our primary goal at Jolly Jumpers is to have fun, receive a lot of satisfaction during basketball, developing a lot of players and to promote basketball in Tubbergen. We have about 180 members and 15 teams in our organization. Three of those teams are playing at the highest level and there is also a wheelchair team. There are a lot of factors that make basketball in Tubbergen possible. First of all, we manage ourselves to gain a lot of enthusiastic volunteers. Besides, we have a lot of sponsors that have helped us in the last couple of years. Thanks to them, we can organize lots of activities and keep our contribution price as low as possible.” 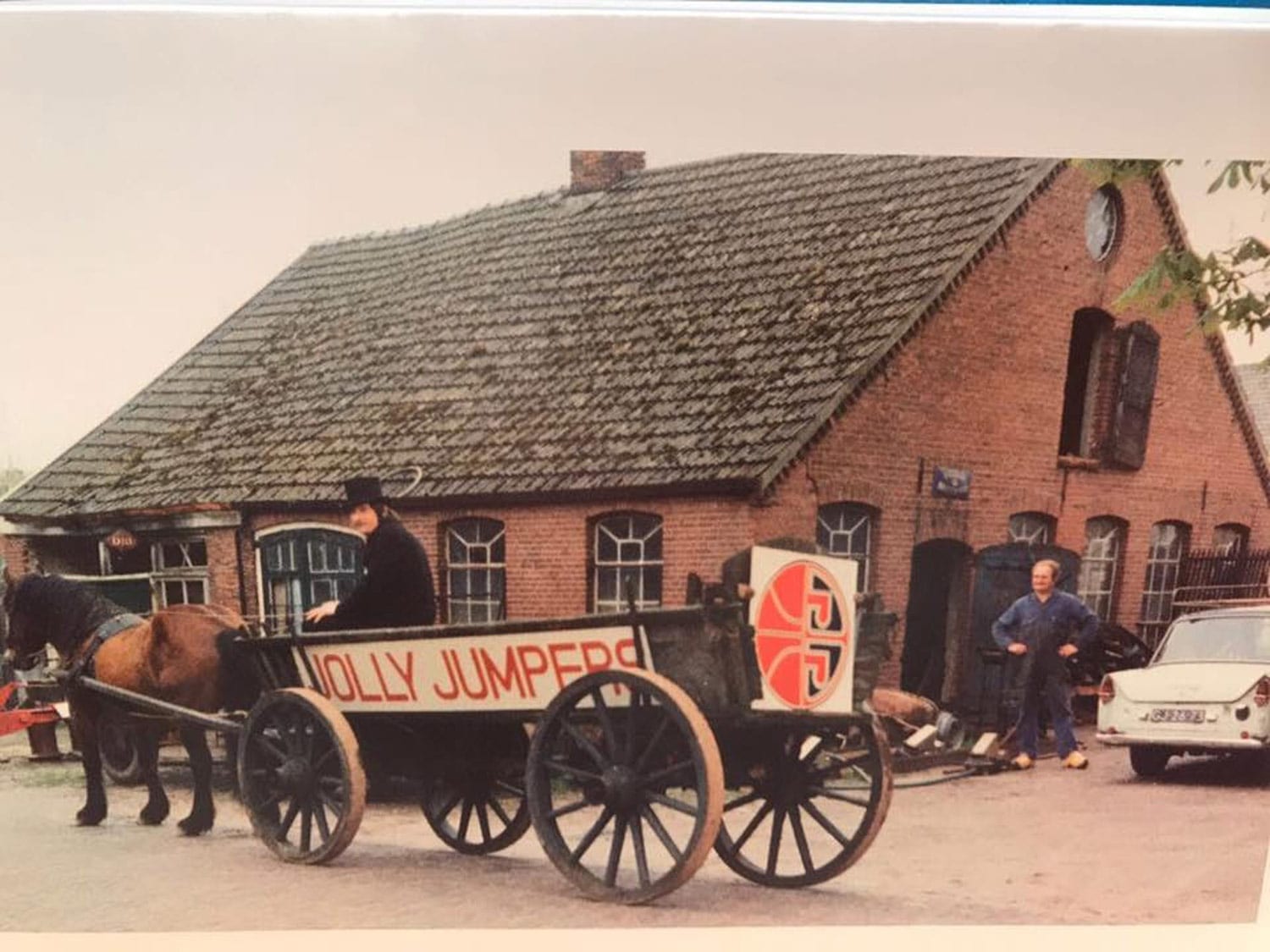 Difficult times, special moments and back in the highest league

It wasn’t always easy for Jolly Jumpers. There were too less young players to create a fundamental base. Hilde: “At the end of the 80s, Jolly Jumpers was forced to retreat from the highest league of the Netherlands. We had to start with our young talented players, and from there we were able to make a come back at the highest league of the Netherlands. Almost 10 years later, at the end of the 90s, we had to retreat again. We had too less young talented players from our own organization to keep playing. We had to come up with a plan for our own talented players, and with a steady structure and board we were able to come back again at the highest league. As result, we won the national cup in 2001, the championship in 2002 and the national cup again in 2003 and 2005. A lot of young players wanted to join Jolly Jumpers, and that’s why we reached an amount of 280 members.”

As you can see, Jolly Jumpers survived many problems. Still, recently they had to face some familiar troubles again. “In 2012, Jolly Jumpers decided to leave the Vrouwen Basketball League because we lost too many sponsors and volunteers,” according to coach Annelies Bussink. She is coaching the ladies at the highest league at the moment. “In 2017, our highest women team became the champion in the Promotiedivisie, with talented players from our own organization. However, lots of players decided to quit. That was another problem for us. We didn’t want to take to many risks and just join the Vrouwen Basketball League again. Though our goal was to return at the highest league after two years, we reached the finals at the Promotiedivisie again in 2018. Lots of players wanted to play at the highest league of the Netherlands. When we found some extra sponsors, we decided to join the Vrouwen Basketball League again in season 2018-2019.”

Hilde: “This year we celebrate our 50th anniversary. What you can see is that we are a resilient organization. We had to face so many problems, but always stood right up, fought for our goals and results and succeeded time after time. We think that is what Jolly Jumpers is all about.” Jolly Jumpers mostly had more women teams than men teams, not that that was consciously. Huub: “Soccer is a very popular sport in Tubbergen, which will be often played by boys within our village. At the moment we see that we have more boys within our organization. That’s what we want to progress, so that we will have more new men teams.

As said, a lot of special moments happened in the past few years. Even now, Jolly Jumpers have made a lot of progression and set many new challengers for themselves. Huub: “Unfortunately, the amount of our members decreased until 2017. Last year in 2018, we see that we stabilized in our amount of members, even made a little progression. Some old-members returned to play basketball again. By creating more possibilities to gain more members, we try to enthusiast more children.”

Hilde: “For years, our teams have made wonderful performances within their leagues. Some of those teams became national champion. The championship of 2002 and the Dutch Cup in 2001, 2003 and 2005 are one of the most special highlights within our history. However, those cups and medals are not the most important things. What matters to us is the fun we have and what we create within basketball. We want to give our members the opportunity to develop themselves.

Annelies: “Trying to play for the Dutch championships and trying to stay in the Vrouwen Basketball League is one of our goals. Getting used to the level of the Vrouwen Basketball League and the physical plays of the other teams is what has to achieve first. When we are able to achieve that, I think that nothing will stop us for trying to play for the Dutch cup and championship.”

Hilde: “It’s really great to be back at the highest league of the Netherlands. We manage to play really good games most of the time, but aren’t always able to maintain a lead for 40 minutes. Each month we see some progression, so we know for sure that we will be a really strong team again in the future.”

The national team and 3×3 basketball

A lot of players were part of a wonderful history in the past 50 years. During every generation, Jolly Jumpers had a collection of good players so they could keep playing at the highest league of the Netherlands. Annelies: “Some of those players made it to the national team, players like: Mirjam Boerrigter, Sandra Schrage-van Langen, Daphne Berends, Lotte Hulshof and of course Sharon and Myrthe Beld. In the past years, players like Laura Steggink, Noëlle Drost and Meike Koelman played for the national youth teams. Noëlle even won the bronze medal during last year’s U20 Championships.” Huub: “We also play some 3×3 tournaments. For players of our highest team played at the first rounds of the Women’s 3×3 League.”

Hilde: “In 50 years of existence, Jolly Jumpers have showed us that basketball in Tubbergen is something that can not be evanished. We will always work for the best quality of basketball we can give to our members. What I also we to say, is that our anniversary weekend will be held in the 6th, 7th and 8th of September 2019. Our program will be announced at our social media accounts and our website!”

Early Prediction On Teams Who Won’t Make the Playoffs

One on One with Roos Koopmans