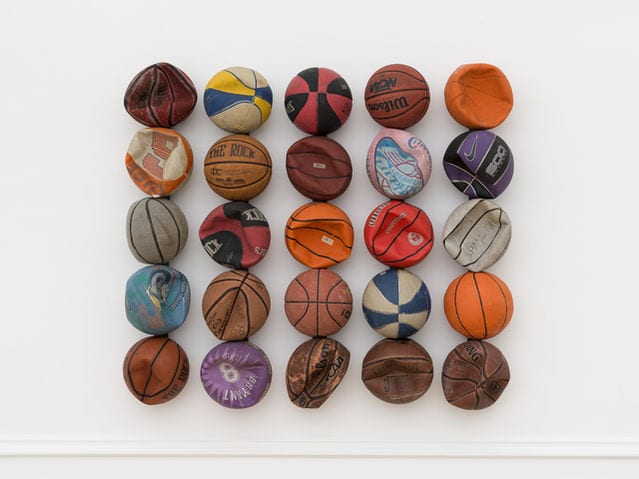 Basketballs and torn-up nets as treasure. Artist Tyrrell Winston gets inspired by products that where left behind on the streets; smoked cigarettes, TicTac candy packaging and basketballs. Is Tyrrell cleaning up the streets with his artworks?

Tyrrell Winston grew up in California. He went to college to study communication, but never finished it. At age 21, he decided to finish his studies in New York. Tyrrell always knew that he would end up there – and Wagner College was the answer. However, Wagner didn’t offer a major in communications, and Tyrrell had to chose something similar. He choose Art Administration, this decision changed his life forever.

Wagner’s major in Art Administration taught Tyrrell about art movements, which he loved. When MOMA had an exhibition about the retrospective on Dadaism, he got inspired. Tyrrell didn’t do anything with the idea’s that he got from the exhibition yet, but later in his life he would try to influence others in the way he was impacted by the works of Dadaism.

Dadaism (or Dada) is an art movement that was very contemporary around world war I. It visualised the ridicule, the meaningless – or nonsense – of the modern world at that time.

After graduating from Wagner College, Tyrrell didn’t know what to do. He was looking for a job, but didn’t get one. He felt hopeless. The in-between-job-interview-hopping made him roam on the streets, visiting lots of gallery openings and museums. He started collecting trash that he found on the streets, such as paper scraps with interesting textures. When he got home, Tyrrell made collages out of them – combined with cut-up’s from newspapers.

Today, the paper scraps and cut-up’s out of newspapers have been replaced by torn-up nets, basketballs and cigarettes. It’s still trash – but then beautiful enough to hang it on the wall. The man himself says:

“I’ll see a man and a woman in a deep conversation outside of a bar that I will probably be sweeping up those cigarettes the next day. you think about being outside of a a bar, what are the conversations: Are you happy, are you sad, you stressed. There’s so many different stories and every single one of these pieces has probably some of those in there.”

With his fascination for these events in life he goes outside – mostly with a ladder on his back –  look for basketball courts and stories. When he finds objects with a story (a torn-up net that is mangled enough), he climbs on the ladder and cuts the old net down. Hangs a new net on the basketball ring to replace the old one and leaves. That is how the art piece “Tomorrow” was born.

“The perfect basketbal is weathered and worn, the perfect broken net is a rusted metal chainlink that is totally mangled and the perfect cigarette would have lipstick on it.”

Want to see more of Tyrrell Winstons work? Check out his website: http://www.tyrrellwinston.com/