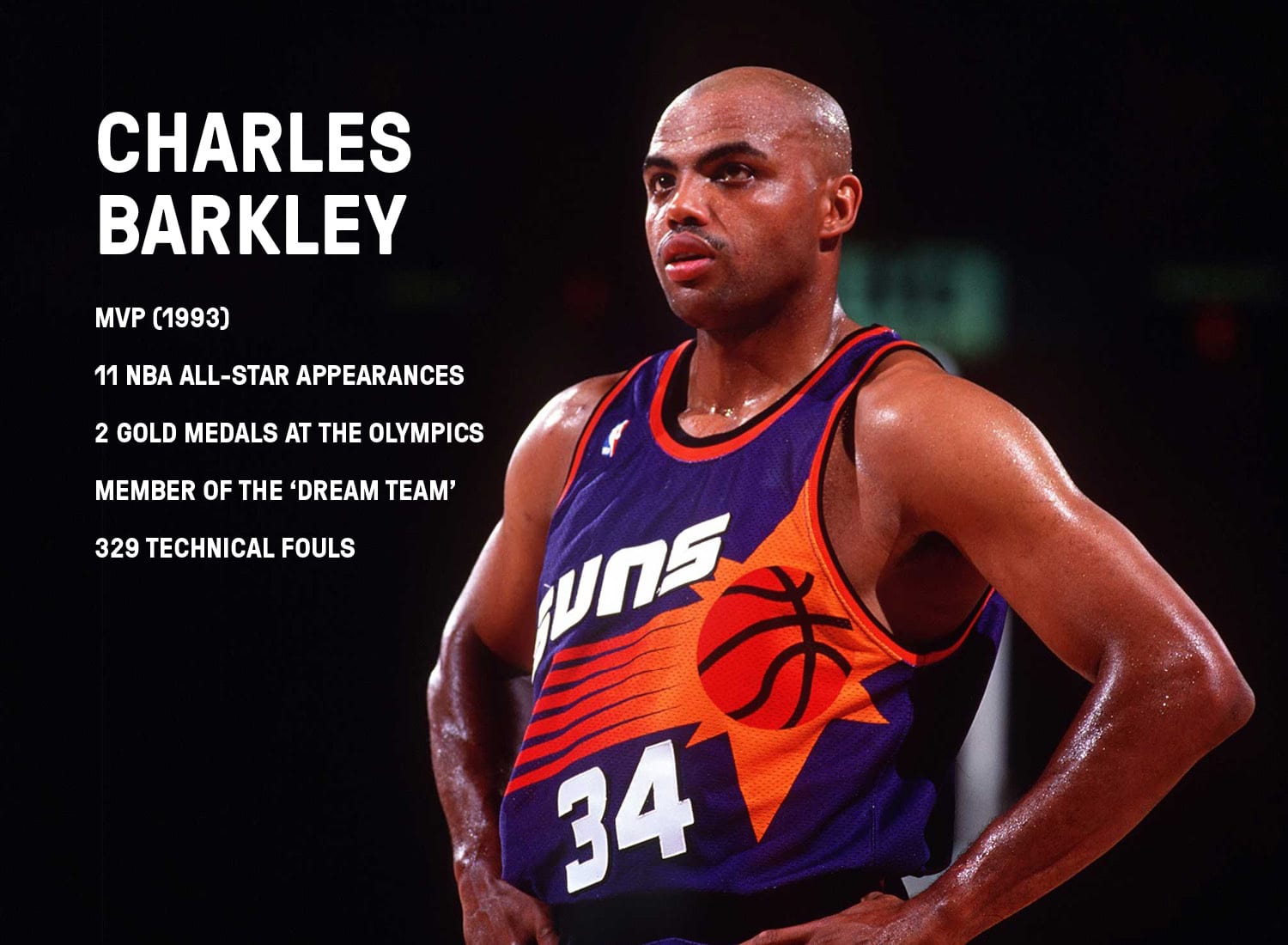 ‘The Round Mound of Rebound’, Charles ‘Chuck’ Barkley’s nickname already tells you everything you need to know about him. He managed to become one of the best rebounders in the NBA through his strength and aggressiveness. This can be surprising, as he was smaller than the average power forward. Barkley even managed to become the smallest player who led the NBA in rebounding, in the 1986-1987 season. Besides that, he was a great defender, shot blocker, scorer and playmaker. Furthermore, Barkley managed to be disqualified from a game 44 times, ejected 6 times, received a technical foul 329 times and got a flagrant foul 11 times throughout his career.

Barkley managed to become a dominant player in the league, therefore he made eleven All-Star appearances and he was voted the NBA MVP once, in 1993. Furthermore, Barkley was part of the ‘Dream Team’, the USA men’s basketball team that won the gold medal at the 1992 Olympics. This were the first Olympics in history that allowed NBA players to participate. The team included players such as Larry Bird, Michael Jordan, Scottie Pippen and Karl Malone. They easily won the gold medal, beating each team with an average of 43.8 points.

Barkley started his career with the Philadelphia 76ers in 1984. Though he performed quite well in his first season, as he already averaged 11 rebounds and 14.8 points, he didn’t become a great player in the league until his second season. That season, under the guidance of Moses Malone, the star player of the team, he was named the starting forwards for the Sixers, and he ended the season averaging 20 points and 12.8 rebounds per game. When Malone and Julius Erving left the team, Barkley took over as the team leader and he was well underway to becoming a dominant player in the league. The next few seasons, he proved his status as one of the promising players in the NBA, earning six All-Star appearances on the way.

After the 1991-1992 season, Barkley was traded to Phoenix. This turned out to be a great trade for both Barkley and the Suns, as he immediately won the MVP award. The rest of his time with the Suns, Barkley was plagued by a lot of injuries, but he still managed to be voted an All-Star and voted into an All-NBA team in every season. Barkley spend his last four seasons with the Houston Rockets, but he was still plagued by injuries, which caused him to miss a lot of games. Furthermore, he was also suspended quite a lot. In his last season, he had a serious injury, but he managed to make a comeback after four months for one final game because he didn’t want to end his NBA career on that note. That way, he ended his career in the right way, getting a standing ovation by the fans.

Throughout his career, Barkley has been involved in several incidents on the court. His most known incident took place in 1991. Barkley was so annoyed by a fan, that he tried to spit on him. Unfortunately, instead of hitting the fan, he spat on a little girl who was sitting in the same area. This lead to him having to pay $10.000 as a fine, as well him being heavily criticized. He did apologize to the girl and her family. Furthermore, Barkley got in several fights with other players, such as Shaquille O’Neal and Bill Laimbeer. The fight between Laimbeer and Barkley led to a record amount of fines: $162.500 between all the players.

Players to Watch in the Summer League

Though he retired in 2000, he definitely didn’t turn his back on professional basketball. Since then, Barkley has been an analyst for Inside the NBA, together with Shaquille O’Neal, Kenny Smith and Ernie Johnson.