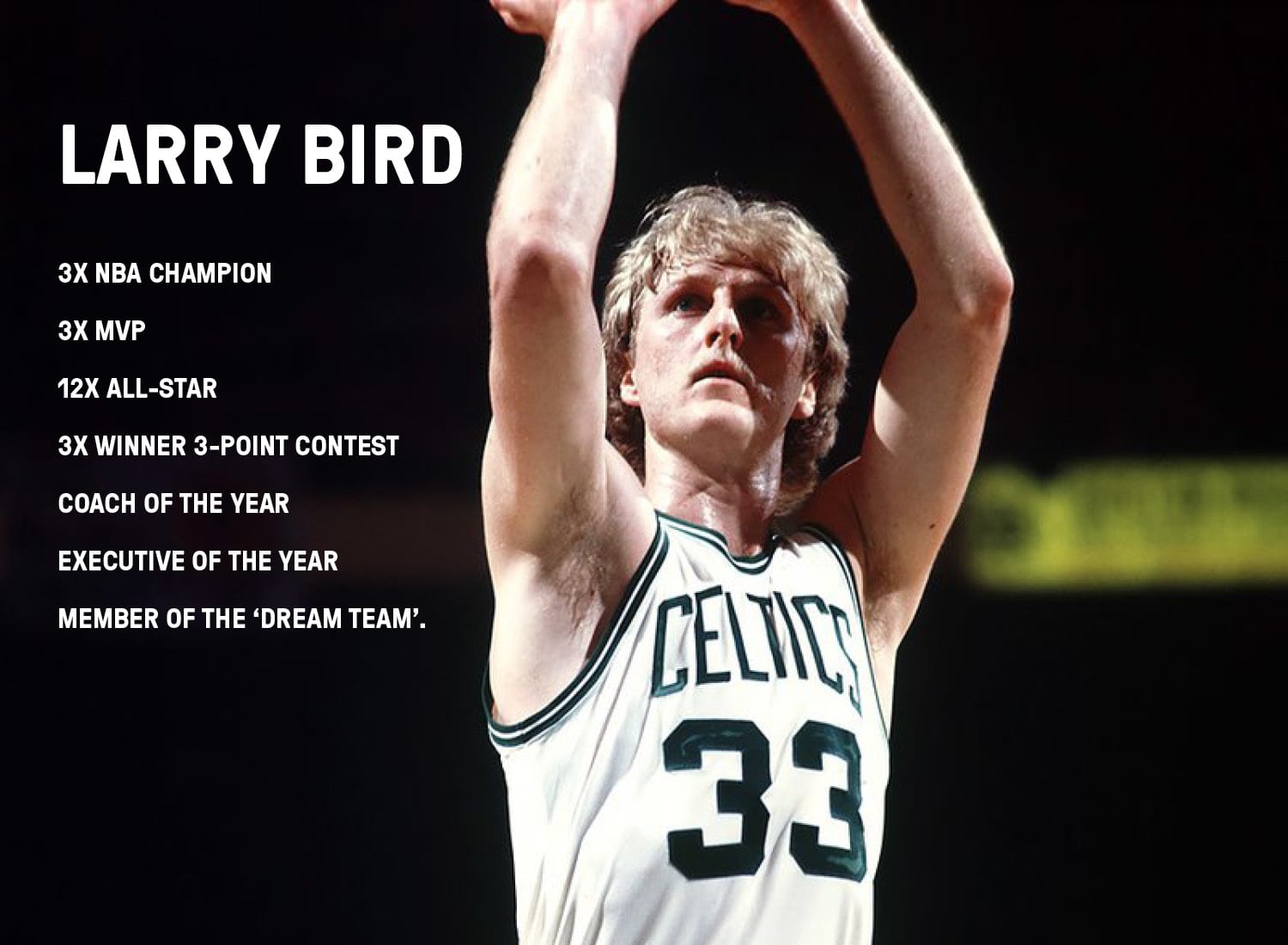 Stores to visit when you are in London

The great white hope, The Hick from French Lick, Larry legend, Uncle Larry. These are all names to one man. Yes, this is about one of the biggest names to ever play the game we all know as basketball. Larry Bird!

During this time, the college basketball game was flourishing. At the end of the 1970s, the pro game was crumbling. After the golden era of Bill Russel and Jerry West in the 60s. A merger with the ABA in 1976 led not only to new teams but a new temperament. It was a time where there were individuals instead of teams. Black people ran the game, and the white people wanted their hero. So when Bird entered the league, the great white hope he became.

Larry Bird’s story begins in a small town called French Lick, that was twin towns with West Baden. Locals call the twin towns the Valleys. It was one of the poorest places in the state. Larry Bird lived in a 3 room house on the side of a railroad. He was the fourth of six children. Bird and his brothers earned a reputation around the valley as troublemakers. They were often caught fighting with each other or with anyone else. If he would get into a fight and his father would find out that his brothers didn’t help him, they know when they got home they would get punished.

Bird and his father where best friends, they did everything together. That wasn’t always easy.

His father had a dark side due to a dramatic call of duty in Korea. Larry remembers waking up in the middle of the night hearing his father screaming from the nightmares he had of the war. What happened to his father in the war affected his entire life. He struggled to carry jobs and even when he was working his demons would often lead him to the bottle. He went out with friends and sometimes wouldn’t come home the next day what was a problem because they were already living tight. His mother often had to work late and sometimes even two jobs. Larry worked at his school during lunch ours and when he was done with school he worked as well.

For Larry, actions spoke louder than words, he was shy and very quiet. If he had to stand in front of a class he would refuse, even if it was for a grade. But when it was time to step on the court and play basketball things changed. Although Bird wasn’t particularly fast on his feet or have a great jumping ability, he had great insight in the game. By his senior year at Springs Valley High, Bird was becoming a star. But Bird was from the valley, where there was hardly any talent. The first thing people said was “they don’t play nobody there. A lot of people think that’s the reason he wanted to prove who he was and that he was good enough.

Late in his senior year, Robert Montgomery Knight A.K.A Bob Knight, coach of the Indiana University offered him to play in his team. That was huge news for the people of the village. Their local hero was going to play college ball for one of the best teams in the country. So Bird left his small town and went to Indiana University, where there were over thirty-thousand students. It didn’t take him to long to see that he was out of his comfort zone. To be exact, it took him 24 days and he was back in his hometown. After that his mother didn’t talk to him for over two months. He started picking up trash and painting park benches. That same winter his father took his own life and Bird lost his best friend.

Bill Hughes from Indiana State University was the one that convinced Bird of giving college another shot, so with a promise to his mom to graduate Bird headed to ISU, a school that had never been to the NCAA tournament. After his first year there, he also entered the draft of the NBA and became the 6th pick of the Boston Celtics. After hearing that he decided to play college ball for one more year. He started that year with a 33-0 winning streak leading his team to the NCAA Finals, where he played one of the most legendary matches ever against the Michigan state university lead by Earvin “Magic” Johnson. Heading into the tournament Magic was the bigger star, but after tip-off it was Bird who hardly missed a shot in the semi-finals. The Finals started and the coach of Magic’s team had a particular game plan, and that was to stop Bird. Everywhere Bird was, there were two guys on him. That game, Bird scored 19 points against Magic’s 24. Not knowing what to expect after winning everything, they lost the final 75-64. Bird and Magic were always compared to each other. They were rivals and this first win went to Magic. But at the end of that year, Bird won the NCAA player of the year, averaging 30.3 points, 13.3 rebounds and 4.6 assists.

After the hard loss in the NCAA Finals, Bird decided to go to the Big leagues. The Celtics drafted him the year before so they had the rights to keep that pick. Bird was never very fast on his feet or had extreme jump abilities, so it wasn’t sure he could keep up with the players in the NBA. The thing Bird was known for was that he could anticipate his opponents moves; he could see what the player was going to do before he did it.

That made Bird an amazing defensive player. He had other great qualities as well and because of those qualities, he quickly became a key player for the Celtics. Bird was a great leader, had an absurd court vision, could pass the ball like no other, was an amazing shooter and was very consistent. In his first year, he also won the Rookie of the Year award despite the fact that Magic had impressive results as well. So if we were keeping score: Magic was the one that won the NCAA Finals. But Bird won two prizes that where meant for the better player. So Larry Legend would be in the lead. In his rookie year Bird averaged 21.3 points, 10.4 rebounds and 4.5 assists a game. As a rookie he was already chosen for the Eastern Conference All-Star Team. He had a total of twelve All-Star appearances.

After his career as a player, he took on a new challenge as a special assistant coach for the Celtics. In 1997, he accepted the head coach position for the Indiana Pacers, so he went back to Indiana. even though he had no coaching experience he led the Pacers to a 58-24 record. He did so well as a coach, that he was named coach of the year. After leading the Pacers to the Finals in 2000 he stepped down. He returned to the Pacers in 2003 as president of basketball operations. At the end of the 2011-12 season, he was named NBA Executive of the year, making him the first and only one ever to be named NBA’s MVP, Coach of the year and Executive of the year.

Not to forget that the rivalry between Bird and Magic made the NBA what it is today. Back then everything was about these two legends. You were a Bird fan or a Magic fan. That was what the game was about!

Throughout Birds career he entered the play-offs twelve times as a player, won three NBA championships, one Gold medal in the Olympics with the first Dream team, played in twelve All-star games, won one All-Star most valuable player, won three MVP awards and won two Finals MVP awards. Bird is the first player to ever win the three 3-point contest three times in a row. And finally, together with Craig Hodges he holds the record of winning three of those in total.

Stores to visit when you are in London