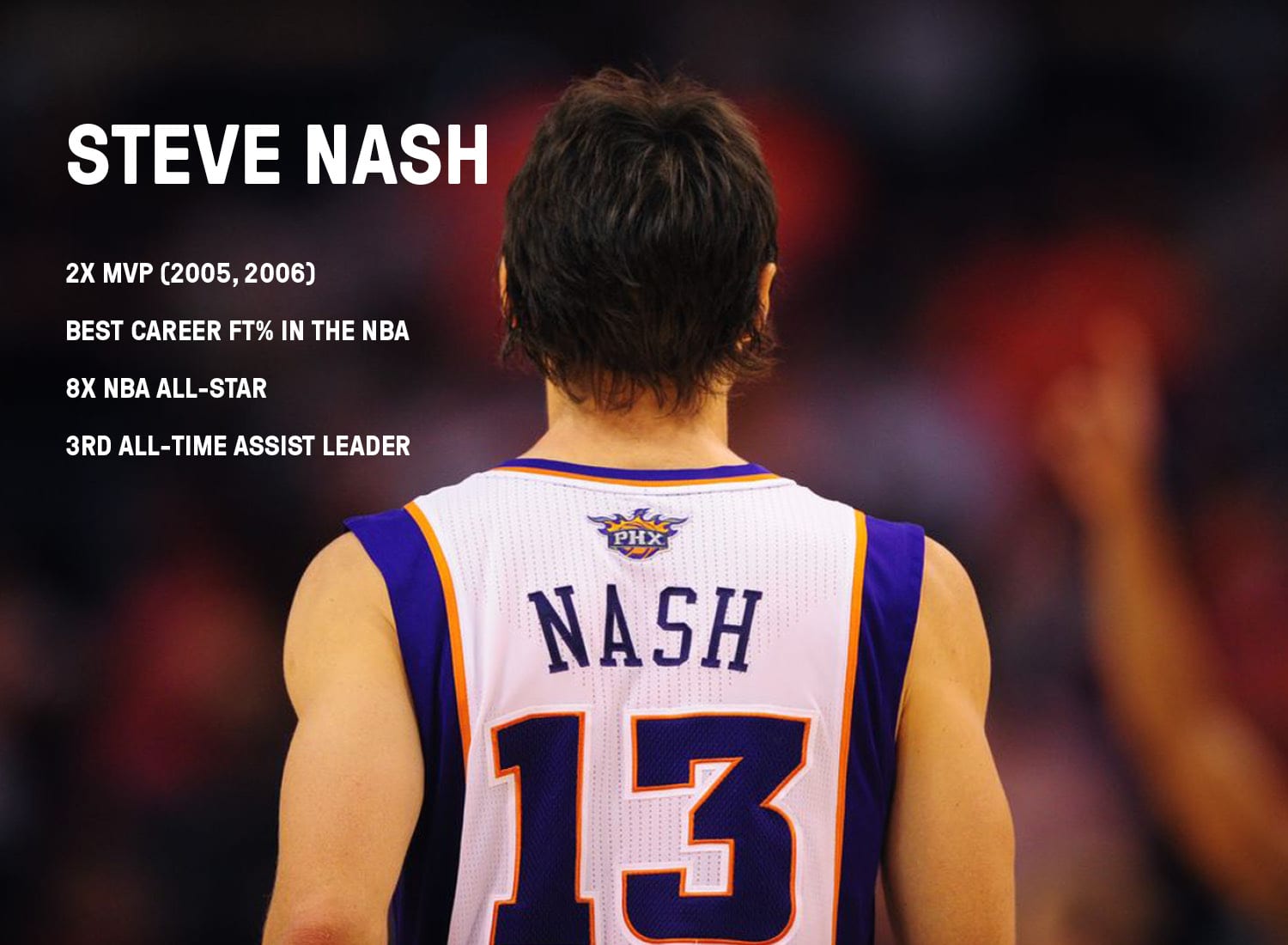 Steve Nash is one of the best point guards in the history of the NBA. In 2006, he was named the 9th best point guard of all-time, and he has definitely earned this honor. Throughout his career, he was selected as an NBA All-Star eight times, was named All-NBA seven times and earned the MVP award twice. He is the third guard in history to win back-to-back MVP awards. Furthermore, he was a great ball handler, pick-and-roll player, passer, free throw shooter and three-point shooter. He has led the NBA in assists per game and free throw percentages at different points in his career. Nash even hold the career record for highest free throw percentage with a minimum of 1200 attempts, with 90.42 percent made.

Nash entered the NBA in the 1996/1996 season, after he was the 15th pick in the draft by the Phoenix Suns. This would turn out to be a great draft year, as among other players in his class were Kobe Bryant, Peja Stojakovic, Allen Iverson, Stephon Marbury and Ray Allen. But, Nash didn’t make much of an impression, nor did he stand out in any way, as he remained the second point guard of the team. Therefore, the Suns traded him to the Mavericks in his third year in the league. This turned out to be a great move in his career, as he immediately became a starter.

In the 2000/2001 season, the Mavs, together with Dirk Nowitzki, Michael Finley, and Nash, managed to reach the play-offs for the first time in more than ten years. the following two seasons, Nash managed to continue on this upward journey in his career, and got an All-Star selection two times in a row.

After the 2003/2004 season, Nash became a Free Agent, but at first he made clear that he wanted to remain with the Mavericks. But, at that time, Nash was already 30 years old, and the owner of the Mavs, Mark Cuban, wanted to build the team around Nowitzki. The Phoenix Suns offered him a better contract, and Nash opted to return to the team that had once drafted him.

There, he managed to reach his actual breakthrough as an NBA player. The Suns chose to play a run-and-gun style, which meant that the players had to play a very up-tempo game, and that style was very suitable for Nash. Together with Amar’e Stoudemire, he formed a great duo, which lead to the fact that Nash had an average of almost 12 assists per game. That season, he received his first MVP Award in his career. Furthermore, throughout his career, Nash has led the league in assists and free throw percentage at several times throughout his career, and he has played several heroic games as a Sun.

The best example is his games against the San Antonio Spurs in the play-offs of 2007 and again in 2010. Since the 1990’s, there had already been a heavy rivalry between the Suns and the Spurs and this continued well into Nash’s NBA days. In 2007, Nash bumped heads with Tony Parker, the Spurs’ guard, and this caused a cut on his nose. For one reason, the cut wouldn’t stop bleeding, and for the rest of the game, Nash had to go in and out the game to stop the bleeding, but he still managed to score 31 points in that game. Unfortunately, they did lose the game and the series.

Three years later, the Suns’ fans probably got a déjà vu, when Nash got another injury in a play-off games against the Spurs. This time, he came in contact with Tim Duncan’s elbow, and his eye was swollen shut. He left the game to get stiches, but returned to the game though he could only see through one eye. It turned out to be a valiant effort for the former MVP, as he scored 21 of the 35 fourth quarter points of the Suns, which led them to winning the series against the Spurs.

After the 2011/2012 season, Nash decided to take another step in his career and sign a contract with the Lakers, but this turned out to be the beginning of the end. Nash couldn’t really make any impact in the game, as he suffered from a recurring back injury, and later a leg injury. Even Nash himself has made clear that his time with the Lakers weren’t his best NBA days. Recently, he posted a video with his best move as a Laker, which was when he made a soccer move on the court. Eventually, in March 2015, he announced his retirement.

Awkward Games To Keep Your Eye on

Nowadays, he is still very active within professional sports, as he is a player development consultant for the Golden State Warriors in the NBA. The Warriors won the 2017 Finals, which led Nash to win the first Championship in his career, something he didn’t manage to do during his active career.

Furthermore, has been a co-owner of the Vancouver Whitecaps FC in the MLS since 2011, he bought part of the Spanish club RCD Mallorca, has been the general manager of the Canadian men’s national basketball team since 2012 and he hosts an annual soccer game for his charity, which always includes a lot of famous athletes. Therefore, Nash definitely manages to stay busy.