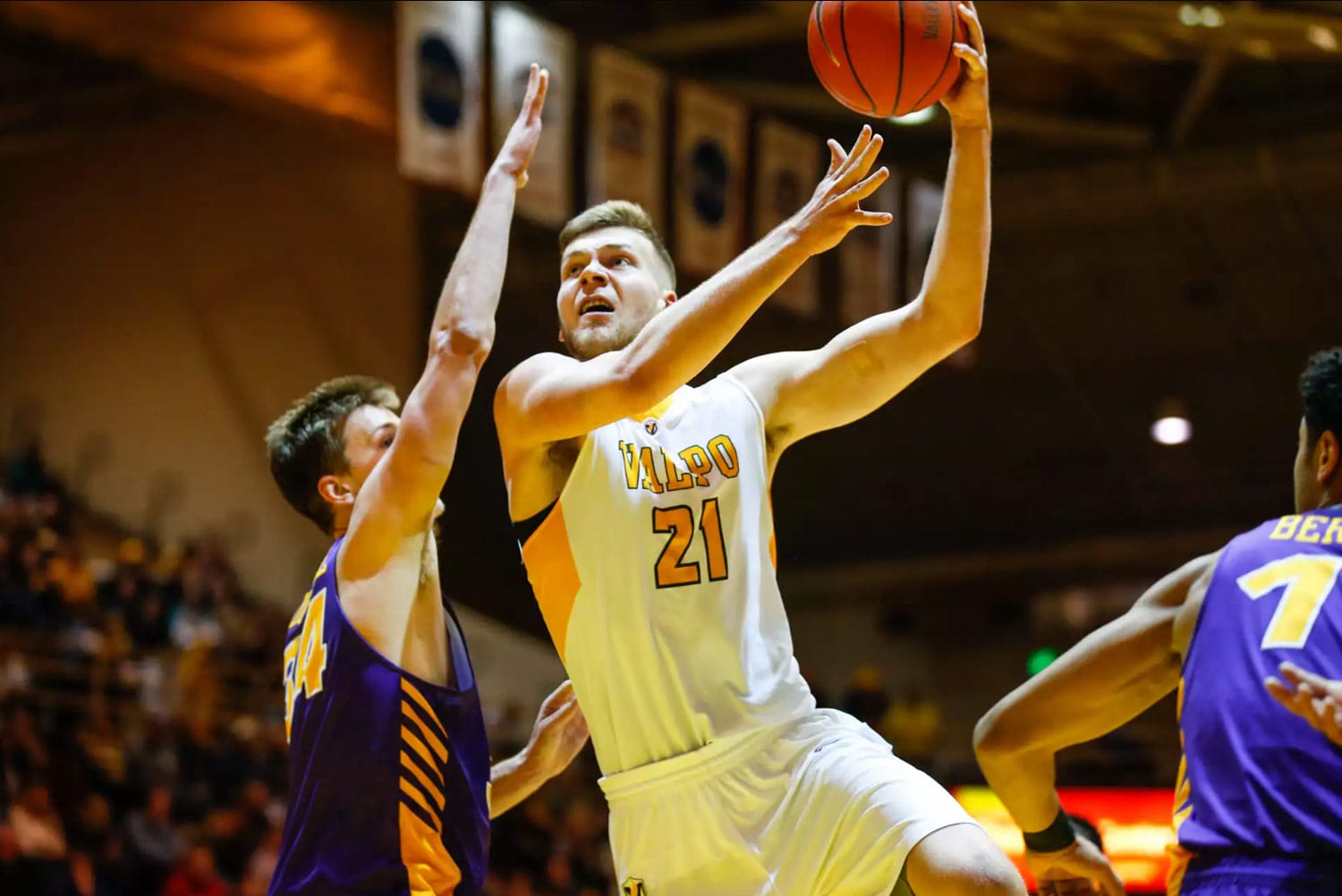 Derrik Smits is having a very strong season with Valparaiso. In his third season with the Crusaders, he seems to be having his breakthrough. Last week’s game (13th Februari), confirms his status as a good Division 1 basketbal player. Smits led Valpo with his fourth double-double of the year, matching his career high with 23 points and pulling down 11 rebounds, just one board shy of his career best. The junior was a perfect 7-of-7 from the field. And the great thing is, Smits can play for the Dutch National Team. Last summer, he already had a lot of fun playing for the National B team.

My Dutch is not where I would like it to be. I speak very little Dutch. I have tried to learn some in the past couple years since getting my Dutch citizenship. I can understand some conversation between people due to my family speaking Dutch when they visited growing up.

Do you feel Dutch? American? Both?

I definitely feel like I am both American and Dutch. Having always lived here, it makes me feel more American but I am proud to be Dutch.

You played for the national team last summer. How was that?

It was a very good experience for me. Getting to play a different form of basketball is always fun. As well as getting to travel to new countries to play basketball.

You toured Europe with the National B team? What did you learn?

I got to see Italy for the first time. It was a good experience for me. I learned to be open to new experiences. And I still keep in touch with a couple of my teammates form this past year.

At Purdue another talented Dutchman is playing. He wasn’t on the national team with you last summer, but have you met?

I did meet Matt last year. We played at Purdue last year.

You might be playing together in the near future for the national team.

That would be a cool experience. He is a very good player and I think we would play well together on the floor.

You had an offer to play at Butler. Why did you choose Valparaiso?

I felt at home when I got to Valparaiso. Every other school did not seem to feel like home but the team really welcomed me with open arms.

What’s your major at Valpo?

You started real strong this season. Playing impressive. It looks like you made a lot of progress. How did you accomplish that?

I accomplished that by a lot of hard work in the offseason. I put in more time this past summer than I probably ever have.

I have always been a pretty good passer. But these last couple years I have been able to show it more with the system we have. I get the ball in situations in which I can show my passing abilities.

You worked with a personal trainer last summer. What did you exactly do?

We worked on everything from shooting, rebounding, and footwork. We worked three times a week on anything he believed would help me become a professional basketball player.

He definitely made me a lot better basketball player, and it made my confidence much higher as well.

The team started strong this season, but the momentum has disappeared. What happened?

We have been dealing with a lot of injuries this year, my self included. I believe this hurt our momentum but we are starting to pick up again.

What’s your goal for this season?

You have an ambition to become a professional player. Will you return for your senior year?

As of now the plan is to return for my senior year. If the opportunity presented itself, I would have to talk to my family about it to make the right decision.

What’s your strong point as a player?

My strongpoint as a player is definitely my offensive skill set. I am very confident in everything I do on the offensive side of the floor.

What’s the point of attention?

The point of attention for me right now is to continue working on rebounding. Rebounding is always been a focus of mine to get better at.

My three point shot is coming along. I am confident in it now. It’s slowly been becoming more consistent with time.

You practiced with your father, Rik Smits. He was a very good NBA player. What did he learn you during all those years. You even had your own basketball court at home growing up.

It was definitely an advantage for me. He has so much knowledge of the game. Playing against him helped me to develop moves to deal with playing against bigger players that I still use to this day.

Is it a disadvantage being compared to an NBA star?

People will always compare me to him, but to me it has never been a disadvantage. I do not let anything anyone says bother me.

When did you realize he could really play?

I’ve always known he could really play, he played in the NBA and was even an All Star. Not many people in the world can say that. He clearly did something right.

Did you ever study your fathers game?

Your father has encouraged you to study videos of players like Olajuwon and Jabbar. Do you look at today’s NBA centers?

I use to watch highlights of them quite a lot. Today I watched a lot of Domantas Sabonis and Nikola Jokic.

Your father told me a year ago you have a lot of potential. He sees you doing a lot of things that I wasn’t doing at his age. You’ve got the potential and the talent but your drive needs some work. Once you realize you have to work hard at basketball you can be as good as you want to be. Is your father right in describing you?

I certainly have not reached my potential yet. I am still growing and improving as a player every year. I want to reach the NBA and end there as a player. At that time I do believe he was right. My work ethic has improved in the past year and I believe he would agree with that.

Is Rik a father who is calling after every game, or do you call him? When he lived nearby he was able to attend your games, now that the family is living in Arizona, is it more difficult?

He used to call or text after every game, now he will wait till the next day usually. He likes to give me some time before talking to me about the game. He used to come to all my games but now living in Arizona, he is too far to come to a lot of games.

Do you speak or send texts afterwards about specific basketball plays in a game?

If I make a good move he typically will text me about it, but typically it is just about the game in general.

I know he teases you about free-throw shooting

Yes he does, I have been struggling the past couple years shooting free throws and he gives me a hard time about it because he knows I can do better.

You made a Olajuwon move this week versus Loyola of Chicago.

Was that move a result of studying other centers?

It may have been a result from watching Olajuwon when I was younger but it really just happened last night. I have made the move in the past when it was available. They were doubling me a lot last game so I figured they would go for the fake.