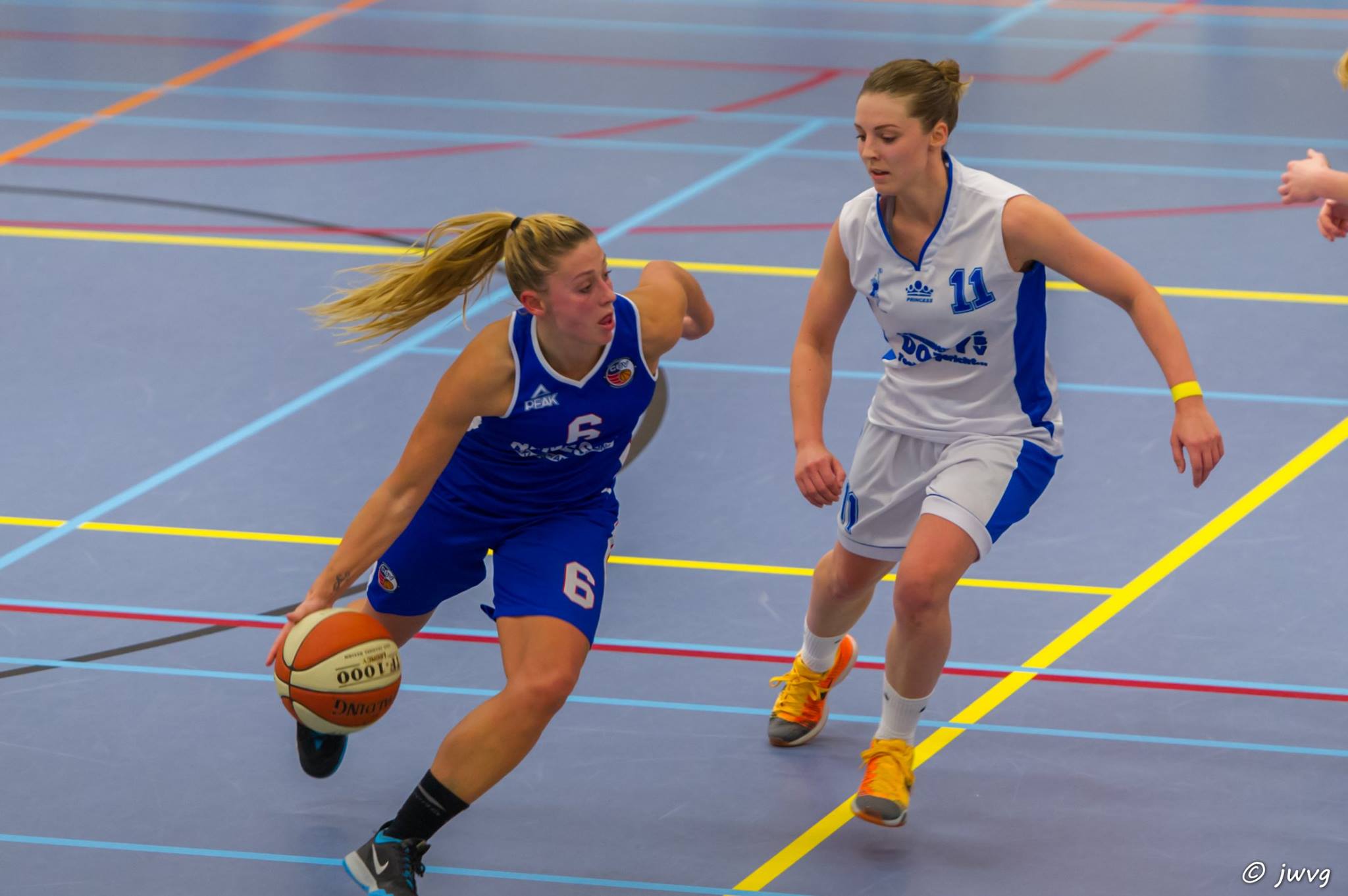 It is the beginning of August, this means we are half way through the Summer break. Soon the teams will start practicing again. Time to introduce some players of the Dutch Women’s Basketball League to the public. Gabrielle van den Bosch is a 23 year old player, born in Den Helder, who is playing for Binnenland.

You played basketball for three different clubs in the Netherlands (Den Helder, Bemmel and Barendrecht). Is there a clear difference between those three clubs?

For me, all three clubs are very different. The board, the fans, my teammates and the coach. At every club, there is a different basketball atmosphere. Right now I am playing at Binnenland. I made this choice because I did not see myself playing for Den Helder anymore. After a great meeting with Binnenland, I felt right at home and decided to go there.

I work at a primary school as a gym teacher and I work in childcare. Besides this, I am coaching the girls’ u16 team of Binnenland this year. I started coaching when I was still playing in Bemmel, after I found out that I loved giving training and clinics at schools. Then, I decided to teach basketball fundamentals to kids u14-2/14-1/u16-2 on Monday nights in Den Helder. Last year, at Binnenland, I started giving practice to kids u10/u12 twice a week and one big practice for kids u10 up to u20. As I said before, this year I am the head coach of the under 16 team and I am excited to see how it will go.

Is this different than playing basketball yourself and how can you use your basketball experience while coaching?

I have a different outlook when I am coaching a team instead of playing. I have a completely different kind of influence as a coach than as a player. I do think I can definitely use my experiences because I have already experienced a lot on and around the basketball court.

What are your expectations for next season?

We have a really fun team and I hope that we can get as much out of ourselves as possible and do the best we can. I think that our main competitors for next season will be Grasshoppers, Loon Lions, Royal Eagles and Den Helder.

What is your strongest skill in a game?

I think my defense has to be my strongest skill on the court. I think everyone in the Netherlands knows that I am quite a good shooter and I know players will defend me harder because of that.

Where are the best backboards for a shooter like you?

The baskets at Binnenland and Loon Lions are the best for me. I don’t like the baskets that are mounted from the ceiling and ‘hang in the air’

Do you have a specific goal you want to achieve in your career?

I am not planning to play with a team abroad, because I do not have that ambition. I do always want to be champion of the Netherlands with my team. My favorite moment in basketball is when I won the championship with my previous team, Bemmel, in 2015.

Will we ever see you back in Den Helder again?

Only for away games and to visit my family there.

You have played in most youth teams in Den Helder. What is the most important thing you have learned in those years?

I think I have learned the most on the tactical aspect of the game in Den Helder.

Meindert van Veen is an excellent baker of pancakes!