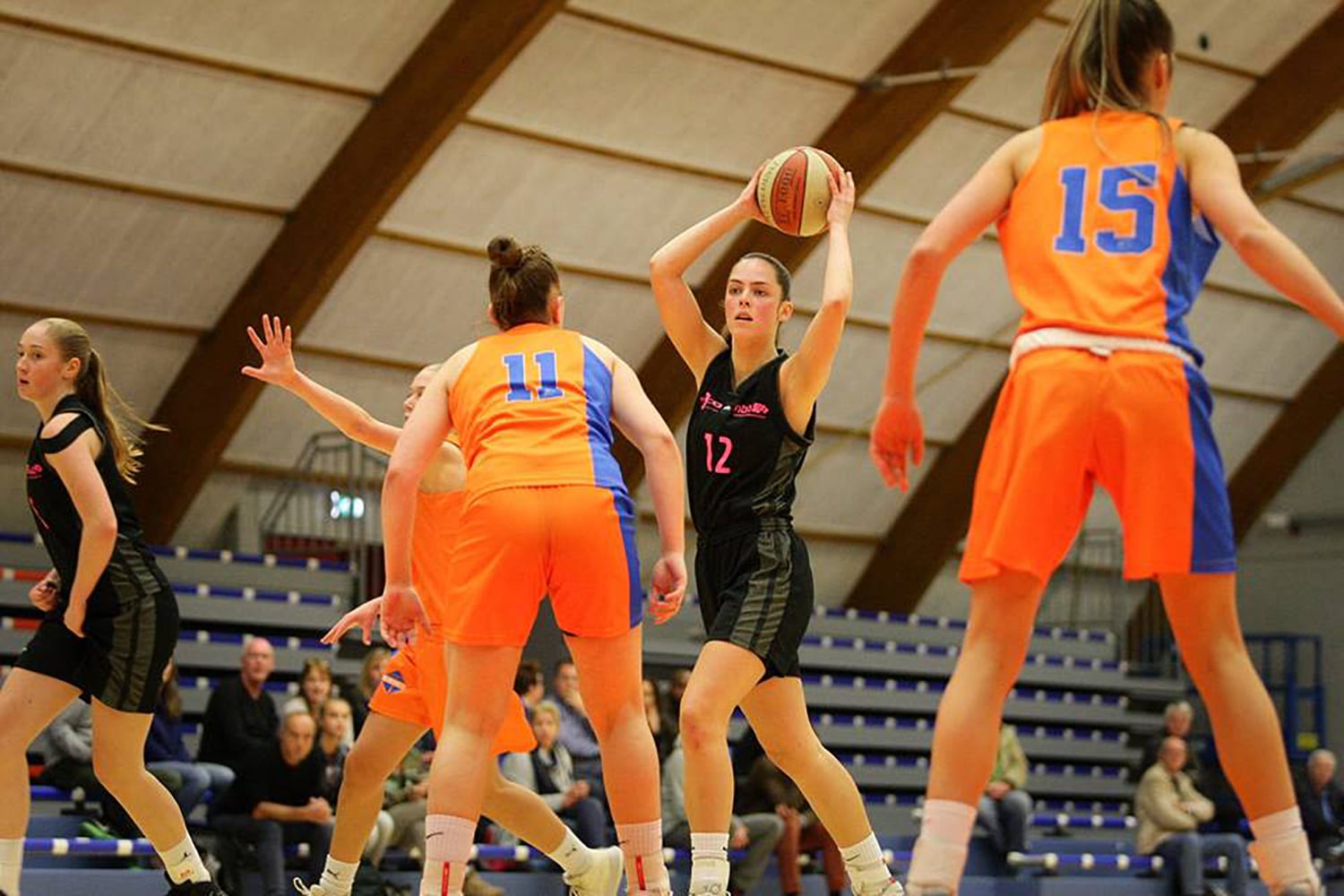 Maaike van Zeijl and Katoo Koenen are both playing for CTO Amsterdam, but that is not their only team. Katoo is also playing at Lekdetec Batouwe and Maaike is playing at the second team of Landslake Lions. They have been playing together for a couple of years.

Maaike: “I think everything you accomplish is because you are playing in a team and have to work as a team to reach goals for yourself and for each other. Nobody can play alone or win by themselves. Every way of developing and growing as a player is, because it depends on the team spirit. That is what makes basketball so fantastic.”

Katoo: “I totally agree with Maaike, you can’t play alone or be a better player by playing all for yourself instead of working with and for the team. Every single step, even passing the ball at the inbounce, can be seen as being part of a team.”

Does your family play basketball as well?

Katoo: “My father played basketball and my brother and I started at the same time. He is playing at Batouwe in Bemmel, so it runs in the family.”

Maaike: “My mother played basketball at Westland Stars in Zuid Holland. My father isn’t really into ball games and my sister plays korfball, but that’s a very different sport than basketball.”

Did you try out any other sports?

Katoo: “I started with gymnastics when I was young. After that, I decided to do competitive swimming and then I decided to play basketball. So there were a couple of sports I did before I became a basketball player.”

Maaike: “Volleyball was my first sport, but I didn’t really enjoy that. I wanted to play basketball, but I couldn’t because it was too far from home. So after volleyball, I joined the korfball team, but that wasn’t it for me either. Basketball became my next sport, and that’s where I feel most comfortable in.”

Maaike: “Well, I only can think of doing something fun with my friends, but that’s also related to basketball. When I have a day off in Amsterdam, I visit the movies with my friends of CTO. At the weekend I play games with them. So basketball is always in my mind.”

Katoo: “When practice is over on Friday, it’s always nice to visit the movies with my friends or organize a sleepover, since I don’t see my friends that often anymore. Being home also feels great for me, or visiting my family.”

Is there a song you really want to hear during practice or warming up?

Maaike: “Well, at the end of last season with CTO under 20 we went to Spain for a tournament. We played the track ‘Kind van de duivel’ from rapper Jebroer. All those people who visited the game thought ‘what on earth is going on here?’ That was a very funny moment. So there are a lot of songs I like to hear, but every year there are new songs.”

Where did you play basketball?

Maaike: “I started in Utrecht, where I first played at BC Utrecht and after that I went to UBall. And now I am playing for the CTO since 2015.”

Katoo: “My first team was Pigeons in Duiven, then Batouwe in Bemmel, I also played at Yellow Blizzards in Zwolle at the same time. In 2015, I moved to Amsterdam to join CTO. This is my third season at CTO, but I am also playing at Batouwe Bemmel right now.”

How would you describe your style of playing?

Katoo: “My main focus is rebounding, fighting for every possession we can get. Since this season, I am sort of the team captain of the CTO under 20 team, so I can give this team a lot of instructions about offense and defense.”

Maaike: “I can’t stand chaotic situations, which means I appreciate a visualized and flowing structure. I like to give my teammates advices to keep offense and defense as clear as it can be.”

Why did you choose to join the CTO?

Katoo: “I already played basketball a lot of days a week at school. Most of the time, I was the only girl playing. Now, there was a chance that I could play with very strong players and great coaches. This combined with good fitness training and practicing 10 times a week made me decide to join CTO. It keeps me busy and that gives me a lot of satisfaction.”

Maaike: “I used to practice twice a day at UBall, but unfortunately they stopped with basketball for girls. When I was invited by CTO to join their team and to practice and work with players and coaches on a much higher level, my decision was made instantly. I mean you can’t refuse this kind of opportunity.”

What does playing for the CTO mean to you?

Katoo: “I think it’s an honor to play at CTO. When I was a child I always admired professional basketball players. I have always wanted to do the same. Now that I am playing at CTO, it definitely feels like an honor!”

Maaike: “It’s something I got invited for. Like Katoo said, I feel honored to be part of this organization, to play and practice here. It’s something I have always wanted to do.”

Can you pick the greatest highlight of your career so far?

Katoo: “I definitely know one important highlight! About 2,5 years ago with Batouwe, I was in the play-offs. I didn’t play that much, but it was a great experience to become Dutch champions with this team. Especially since we were down with 3-0 in the finals against Landslake Lions and still won the play-offs series with 3-4!”

Last summer, you made your debut for the Dutch National team under 20. How did you experience that?

Katoo: “First of all, I never thought I would be selected for the national under 20 team. I practiced with fantastic players like Janis Ndiba and Laura Westerik, I learned a lot from them. It was a more physical competition than I was used to. Nevertheless, it was an amazing experience in every way!”

What would you most like to improve about yourself?

This summer, you played for the Dutch National team under 16. How did you experience that?

Maaike: “I had so much fun back then! At the beginning we had some struggles, but later on you get to know your teammates better and better. You know each other’s strength and abilities and that allowed us to perform better as a team. I think I became a stronger physical player in the defense. I also think I became stronger in offense, which was never my greatest ability. Now, I think I have proven that I can compete at this level.”

Do you think basketball in the Netherlands is growing?

Maaike: “This sport has an exponential growth in the Netherlands right now! Ziggo Sport broadcast the Orange Lions last November against Croatia and every week it broadcasts a game from the Dutch Basketball League. I think our country, especially the Orange Lions against Croatia, gets more attention and that will get more due to the (social) media exposure. Also, a lot of children will watch this sport and will think ‘I want to be part of this too’.”

What was the most thrilling game you have played so far?

Katoo: “Oh, that was in this current season! When we played the first game of the under 20 competition in Den Helder, we were down by 14 points in the fourth quarter. There were five minutes remaining and we said in a time-out ‘we still have a chance to make a good comeback!’ We fought really hard to reach overtime. In overtime we won with 55-60 and that was amazing! However, we have to keep playing and not think about the score during a game. The score matters when we played four quarters and the clock shows 0:00, as long as we gave everything we could.”

Last season you played in the finals against Grasshoppers in the U20 competition. How was it to reach such a milestone?

Katoo: “Last year I think we played better every week and we really have kept growing to build up a great team chemistry. There were a lot of new CTO players and as the weeks passed by it felt like family, and it still does now. For me it’s great that we reached the finals with this family. Of course, it’s a pity that we came up short in the finals, but if I see where we started and where we ended last year then I am very proud of the team!”

Maaike: “In the Final Four we competed against Rotterdam. We lost the first game with three points, which was our game home. During last season, we worked hard and our gameplay has definitely improved. The second game in Rotterdam, we fought for 40 minutes to win and eventually won the game with 23 points. That’s something to be proud of.”

What is your goal for this season?

Katoo: “I agree with Maaike, though we lost some games of which I think we could have won. Nevertheless, we still have to play some games within this competition and two of our players Ellen Meeringa and Alina Sendar are almost recovered from their injuries.”

Is there a team or a country outside the Netherlands where you wish to play?

Katoo: “Well honestly, there isn’t. My intuition tells me that I really want to stay in the Netherlands. Of course, playing outside of the Netherlands sounds fantastic, but I think I would be homesick and miss my friends and family a lot. CTO has been a second family for me, so I would miss everything I built up there too. Although, never say never, but for now I think it’s best for me to stay here.”

Where will you be in 10 years?

Katoo: “I hope I graduated the PABO and that I am playing for Batouwe Bemmel.”

Maaike: “I hope that I am playing somewhere outside of the Netherlands. It doesn’t matter to me where.”

5 photographers we should look out for