Both of them played in the Dutch Basketball Finals in Zwolle last May. With MBCA Amstelveen, they came up short by two points difference against Dozy Den Helder. Let’s meet Shanté Vermeulen and Lilou Rusticus!

How and at what age did you start playing basketball?

Shanté: I began at the age of 8. My parents brought me to Quick Runners in Huizen and from that moment I was overwhelmed pretty quick.

Lilou: When I was 10 years old, my mother took me and my sister to a game of Zorg en Zekerheid Leiden. I was really interested in basketball, so I visited a Basketball’s Cool in Amstelveen.

Where did you start playing basketball?

Shanté: I started at Quick Runners in Huizen. From there I went to MBCA Amstelveen, which is my current team at the moment.

Lilou: I started at MBCA, and I am still playing there.

What do you enjoy about your current team?

Shanté: Quick Runners organized really nice events, sure. MBCA does the same, for example the Basketball’s Cool. That’s why I like it here, and I see that event triggers other kids to play basketball as well.

Lilou: MBCA is not only a nice organization, but also a good organized organization. I see that a lot of MBCA teams are ranked pretty good at different competitions. 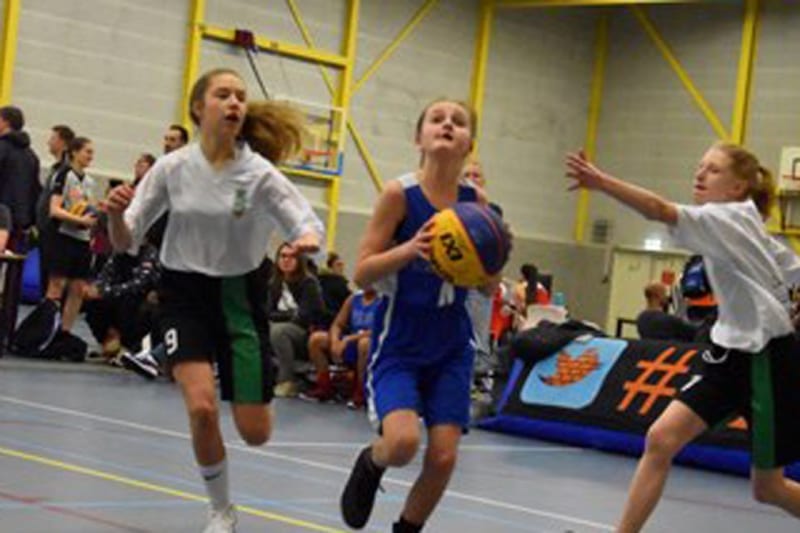 What kind of players are you?

Shanté: I am a shooting guard, so I like to shoot the ball from distance and penetrate the basket.

Lilou: I play as a forward / center. What I like to do is pass the ball to players who can shoot the ball well, or take a shot myself.

Last May, you two played with MBCA at the national finals in Zwolle. How was that for you?

Shanté: I really enjoyed that day! It was really tough to play against Den Helder. Nevertheless I liked it a lot.

Lilou: It was really cool! It looked very professional in Zwolle, and really nice to made it all the way to the finals.

What will you never forget about the finals?

Both: Well, I think that we lost with 2 points differential, but also that we managed to reach the finals.

Shanté: Your brother Damian Vermeulen is playing in the Dutch Talent League at Harlem Lakers right now. What did you learn from him?

Different kinds of shooting skills, like how to shoot a ball well. Damian also thought me how to give good passes and how to attack the basket.

I do like Zorg en Zekerheid Leiden a lot. My favorite player there is Worthy de Jong.

Shanté: Is there a game you saw that you will never forget?

Definitely! It was the seventh game of the NBA play-off finals in 2016 when LeBron James and Cleveland Caveliers became the NBA champions of 2016.

Lilou: You and your team moved to a higher competition with MBCA. Do you see any differences at playing basketball now?

Not really, I think it is a lot more quicker. At our previous competition, it wasn’t that quick, but the dynamic style of playing is getting faster now.

Shanté: Did you ever dream about playing for the national team of The Netherlands? Can you imagine that?

I certainly dreamed about it, and that is my primary goal: to reach the national team. I want to play with a team I feel comfortable at and where players can find me on the court and where I can find them either.

Lilou: Can you describe a beautiful memory?

Well of course reaching the second spot at the finals in Zwolle. Also, last year when I was dribbling the ball, I made a reverse and I made the basket. I fought that pretty special, because that seldom happens.

Shanté: If you can be Lilou for one day, how do you think your style of playing basketball would be?

First of all playing at another position. I can hardly imagine it because I play as a guard, and Lilou has a position where she scores from underneath the basket; a place I don’t score that much.

Lilou: If you can be Shanté for one day, how do you think your style of playing basketball would be?

Well, then I am a guard, so I will set some plays on the court. I think I will shoot the ball well from distance.

What is the important thing to you to keep playing basketball?

Both: Creating a nice team chemistry and feel comfortable where you play.

Highest Scoring Players in Their Debut For a Team