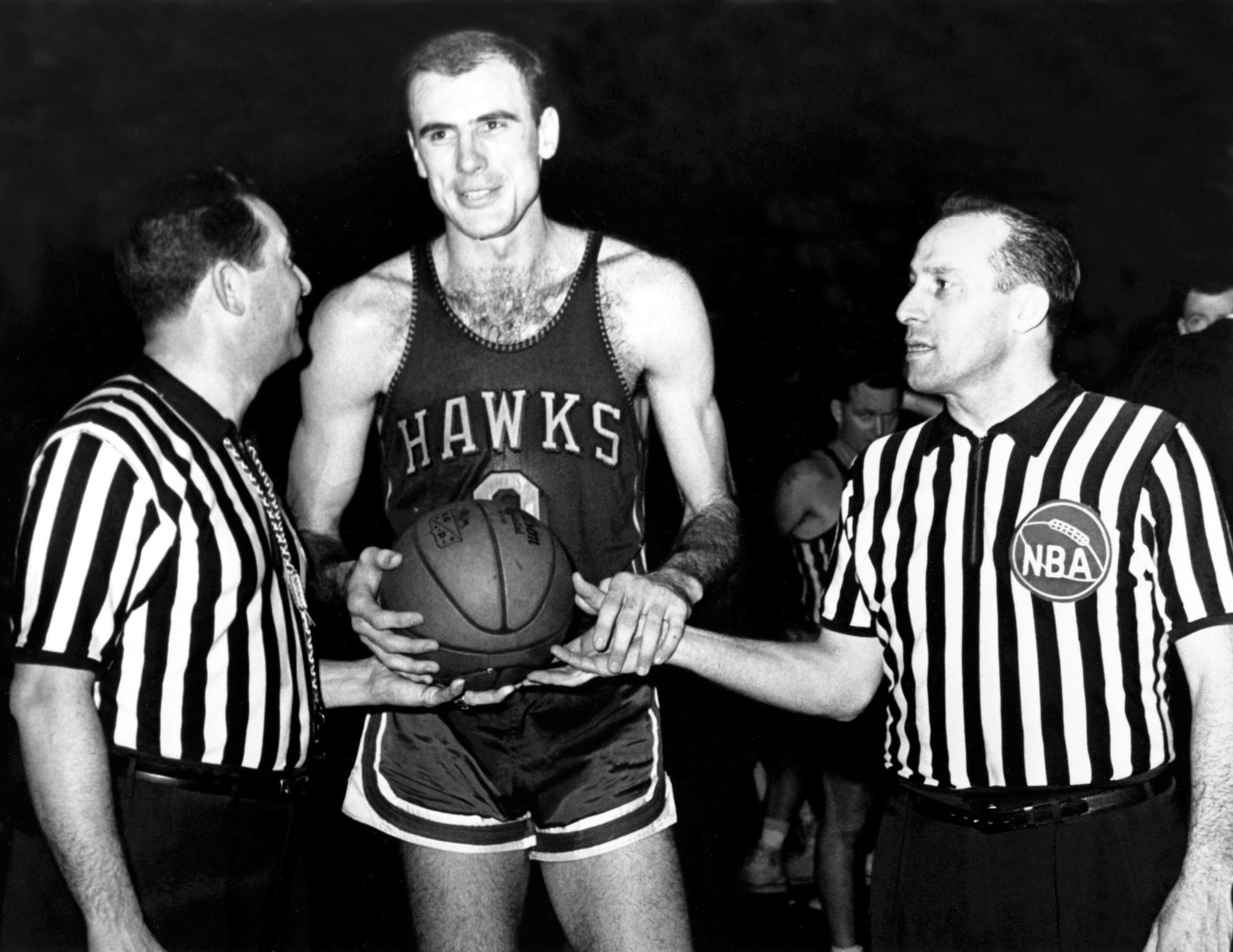 Here is a name you are probably not so familiar with. Most people know him from old nab highlight films or many from the NBA2k MyTeam series. At first glance, he might look like a way too hairy gym teacher. This, of course, isn’t true and he is one of the NBA’s earliest superstars.

Bob Pettit was born as Robert E. Lee Pettit Jr. on December 12, 1932, in Baton Rouge, Louisiana. The beginning of his career didn’t stand out. He was cut from the Baton Rouge High School basketball team in his freshmen and sophomore year. He eventually joined a church league. He started to train more with his father who was a county sheriff at the time. He just kept shooting and improving. He also grew 5 inches in just one year. He went on to join the high school as a senior and help them to win a state championship just the next year in 1950.

He went on to join the Louisiana State University. He averaged 27.4 points per game and earned All-American honors twice. He set a then-SEC scoring record of 60 points against Louisiana College in his second game, and also the SEC record for scoring average, with both records being broken by Pete Maravich. Pettit also was the second player in major-college basketball history to average more than 30 points a game.

Bob Pettit went on to be drafted number 2 in the NBA 1954 draft. Needless to say, this wasn’t one of your all-time drafts. The first overall pick was Frank Selvy who went to the Baltimore Bullets. Bob Pettit went to the Milwaukee Hawks, now known as the Atlanta Hawks. He was the only player from the draft to average over 20 points in his career, 26.4 to be exact. He was also the league’s Rookie of the Year award by averaging 20.4 ppg and 13.8 rpg. He also played in his first All-Star Game that season and earned the first of 10 consecutive selections to the All-NBA First Team.

Despite getting Bob Pettit, Milwaukee fell to the last place in the Western Division with a 26-46 record. This was the reason that the owner at that time, Ben Kerner, moved the team to Saint Louis. They went on to slowly improve, and in that time Bob Pettit won the NBA MVP of the 55-56 season after leading the league with 25.7 ppg and 16.2 rpg.

The Hawks went to 1957 Finals to face Bill Russel’s Celtics. No one expected St. Louis to put up much of a fight against a Boston team that had posted the best record in the league. The thing was that the Hawks were ready for the finals. They went on to win the first game with a 125-123 victory in double overtime. Boston came right back and won the second game at the garden. They also split two games in Saint Louis.

Boston won the 5th game at home to get the 3-2 advantage. Game 6 was a nail biter. The game was a tie until the last seconds. Bob Pettit went on to miss, but Hagan tipped the miss in at the buzzer. This gave the Hawks the tie.

Game 7 was one of the most exciting games in NBA Finals history. It came down to the last second when the Hawks were trailing. Bob Pettit eventually went on to make the two free throws that send the game into overtime. The Celtics closed out the victory after the missed shot from Pettit at the buzzer. The final score, 125-123.

The next year Bob Pettit would be remarkable with 24.6 ppg and 17.4 rpg. The Hawks would meet the Celtics for a second straight year in the finals. Bill Russel would injure himself in game 3 which increased the chances for the Hawks. They went on to win the series in 6 games. Pettit even scored a by that time playoff record 50 points in one game.

Saint Louis would be top of the west in the upcoming three years. The would never spark the magic from the previous years, but they did make it back to the finals twice in 1960 and 1961. These finals would be both against the Celtics. 1960 was a good series, even going to game 7. The Celtics would come out on top and claim the championship. The second year they didn’t stand a chance against the Celtics. They lost in 5 games. Bob Pettit did win one more MVP in 1959 with 29.2 ppg and 16.4 rpg.

Players to Watch in the Summer League