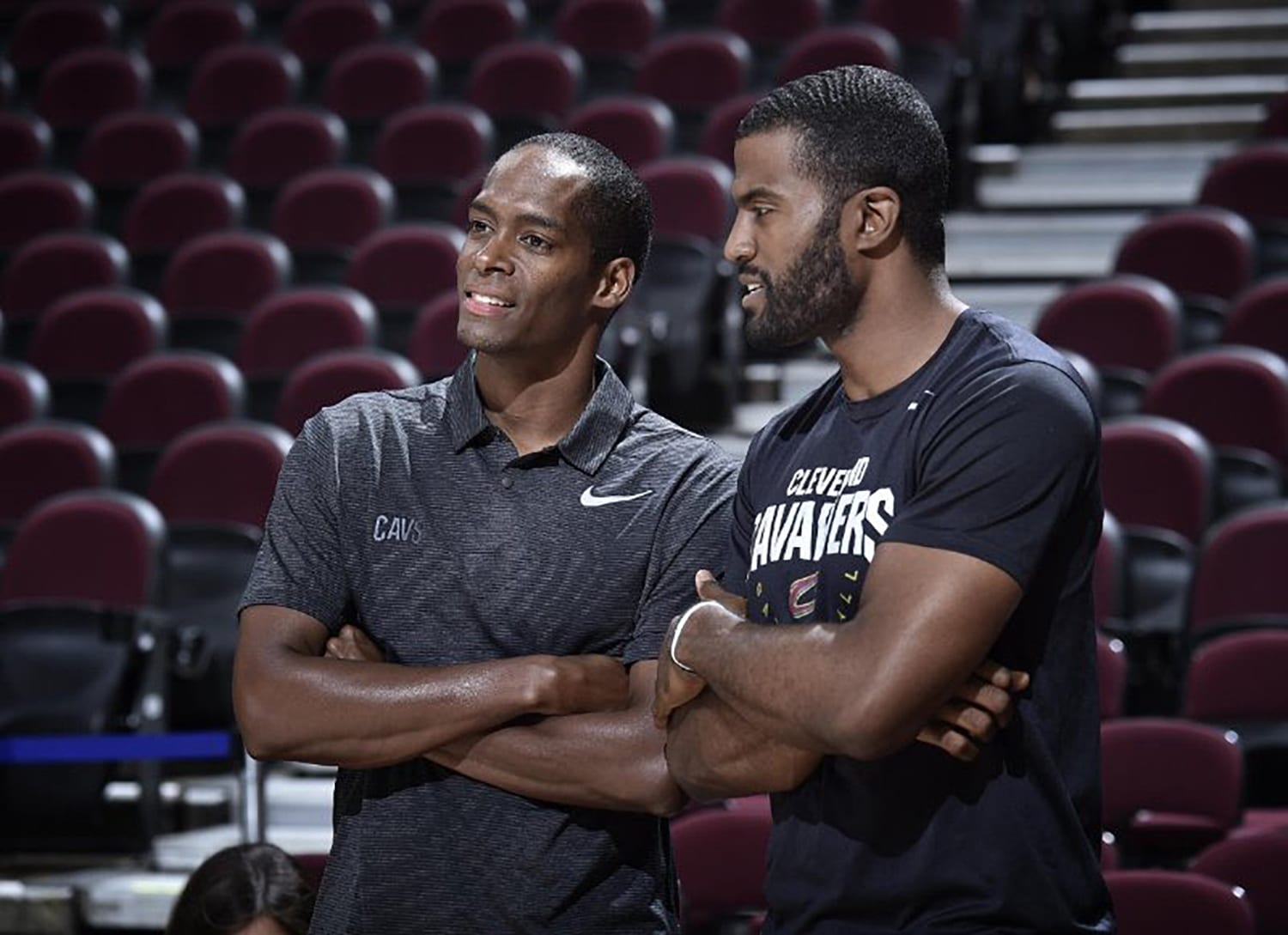 The Story Behind Kith

Sam Jones is an American-Dutch assistant-coach for the Canton Charge in the G-League. He started his coaching career in the Netherlands with Den Bosch, but after three years as their head coach and the associate head coach of the Dutch national team, he decided to take the next step.

How did you become assistant-coach at the Canton Charge?

Well my contract was finished in Den Bosch, but I was still working as associate head coach of the Dutch National Team. During the summer of 2016, the national team was competing against Germany who had 2 NBA players. Therefore, there were a lot of NBA scouts following the European Championship Qualification games. One of those scouts happened to be the assistant general manager of the Cleveland Cavaliers. And because my agent was actively looking for a coaching position for me in the USA, somehow their paths crossed and they spoke about the coaching staff that just upset Germany in Germany. So I give a lot of credit to Toon van Helfteren for giving me a chance to be on staff and all those great players we had/have that continue to do a great job representing the Netherlands. The general manager told me that he had an assistant coach position open on staff with the Canton Charge, and I was excited to interview for the job and eventually get it.

Is this a dream come true for you?

This is absolutely a dream come true for me. After spending 16 years of my adult life in Europe, playing and coaching, it was time for me to come back to the USA and bring back everything I’ve learned through out my professional career to this next generation of players.  The dream is obviously to coach in the NBA, but being able to develop as a coach in this championship environment has been very gratifying.

Can you explain your role as assistant-coach?

I like my role here in Canton. I’m currently in my second season and I have developed a lot since landing here with the Charge. I help practice plan with the head coach, help with player development and I do a lot of video work as far as scouting our opponents. I also help with ‘in game’ coaching as we lean on each other heavily as a staff.

Was it a big change to go from head coach at Den Bosch, to assistant-coach in the G-League? Did it take some getting used to?

It was definitely an adjustment period. First of all the culture and the rules and just the game in general is totally different. I always say… College, international and NBA basketball are all three different sports. The terminology, the mindset and the rules are all totally different.  So it took me a couple of months to adjust to the NBA culture, but I’m all in now!! As far as coaching, I’m very pleased with my role.  As I mentioned before, we rely on each other as a staff, so my input is valued as equally as I value the other coaches’ input. So it’s a great work environment.

How is your team performing at the moment?

Our team performance is up and down this season as it was last season and every season. We finished 3rd in the East last season, but that didn’t come easily. This league isn’t built for team chemistry and growth as a team. It’s built for individual development for players and coaches, so it’s hard to mold a team. That being said, we are growing with every practice and every game, so it’s always fun.

What are your expectations for the rest of the season?

I expect us to continue to develop these players to become the best they can be. 3 players from last season secured NBA contracts and 1 player played for team USA. That is our championship. When we see our players move up to the NBA or secure great contracts overseas because they developed under our umbrella, that’s a win for us. So if we can continue to develop our guys and they move on to greater things during the season or after the season, I will be happy with that.

The players in the G-League all want to go to the NBA. How is that for you to work with those players? Is it difficult?

As I mentioned before it’s only difficult because it’s hard to build a team. I wouldn’t call these guys selfish, but they are all here for one reason, and that’s to make it to the next level. Winning and losing is secondary. So it’s the mind shift that I had to make that has made it more manageable for me. I’m used to focusing on winning basketball games, but now I have shifted to player development. So this experience has been deeply valuable for me because now I have experienced both team building and player development in my career.

What do you do with those players? How do you try to prepare them for the NBA Can you still learn them new skills or help them develop their other skills?

With the guys who have already played in the NBA, it’s mostly just repetition for them. With the younger guys, you can help them in every aspect. We watch a lot of video individually with our players to focus on their basketball IQ. We also put a lot of work in during, before & after practices. You’ve heard the saying ‘no days off’, well that really stands true in the NBA. Some guys literally take NO DAYS OFF. The work ethic is amazing to see and it is contagious.

Is it difficult that players can easily be sent to or recalled from the Charge and that therefore changes have to be made to the rotation?

That’s one of the most difficult things that the coaches and the players have to deal with. When NBA players get sent down, they have to play a certain amount of minutes. Sometimes our starters will see limited minutes and even no minutes if we get an NBA assignee.  It’s tough on the coaches and of course the players. The G-League prepares you for any and every situation. It’s the hardest league to coach and  play in, but if you can make here, you can make it in any league.

Does your team, the Charge, play the same systems as the Cavaliers? And why did you make the choice to do that?

These are all great questions. Yes we play the same exact system as the Cleveland Cavaliers. We made this choice so there is true synergy within the two teams. We are an extension of the Cavs. Our entire coaching staff participates in the Cavs pre season and training camp to learn the drills, terminology and philosophy of Tyronn Lue. We also do this because the Cavs assign players regularly to our team and we can implement them into our team easily, if we are running the same offenses and using the same defensive terminology. It makes sense and it works out great.

What is your ambition? Do you want to become a head coach in the G-League? Or maybe even the NBA?

Is there a lot of contact between the Charge and the Cavaliers? Do you have meetings with Lue about the progress of some players?

We communicate regularly with management and coaches from the Cavs. We really are 1 team and as I mentioned before we are just an extension of the Cavs. We have Cavalier coaches come to a lot of our games and I go up to as many Cavs games as I can if my schedule allows.  The Charge just recently went to Cleveland to practice at the Cavs facility so NBA All-Star Isaiah Thomas could continue his rehab with us. So the communication between both teams is clear and fluent.

Are there joint practices between the NBA and G-League team?

We don’t have joint practices, but as I mentioned, we have helped the Cavs out by allowing some of their players to practice with us and vice versa. There is something new in the G-League this year called ‘2-way players’. So we have two 2-way players and the play primarily with us, but they are also considered Cavalier players. So if someone from the Cavs gets hurt or needs rest, they can easily call one of their 2-way players up and they will not miss a beat because the system is the same.

On several occasions, we have seen you on the sidelines at Cavs games. What is your role at that time?

I helped out a lot during the pre-season, but now if I’m at the games, I’m just watching the workouts and warm ups to get new ideas. Also there just to support our guys and keep the communication alive between the coaching staffs.

Are you planning on returning to the Netherlands?

I am 100% planning on coming back to the Netherlands. I spent 11 years of my life in Holland and 16 years in Europe. So of course I plan on coming up. I’m actually planning a Sam Jones Basketball Academy as we speak. A new website should be launched with more information pretty soon. I have deep roots in Den Bosch and in Holland, and I look forward to returning there periodically.

Do you still feel a bit Dutch, though you have returned to the US?

I feel very Dutch. And I miss the Netherlands very much. Being able to coach the Dutch National Team for 4 years was a true privilege for me. So I feel very connected to the country. My entire family has duel citizenship as well, so we are all Dutch/Americans. You can’t get rid of us that easily. We look forward to our return to Holland!

Stores to Visit When You Are in Berlin

The Story Behind Kith