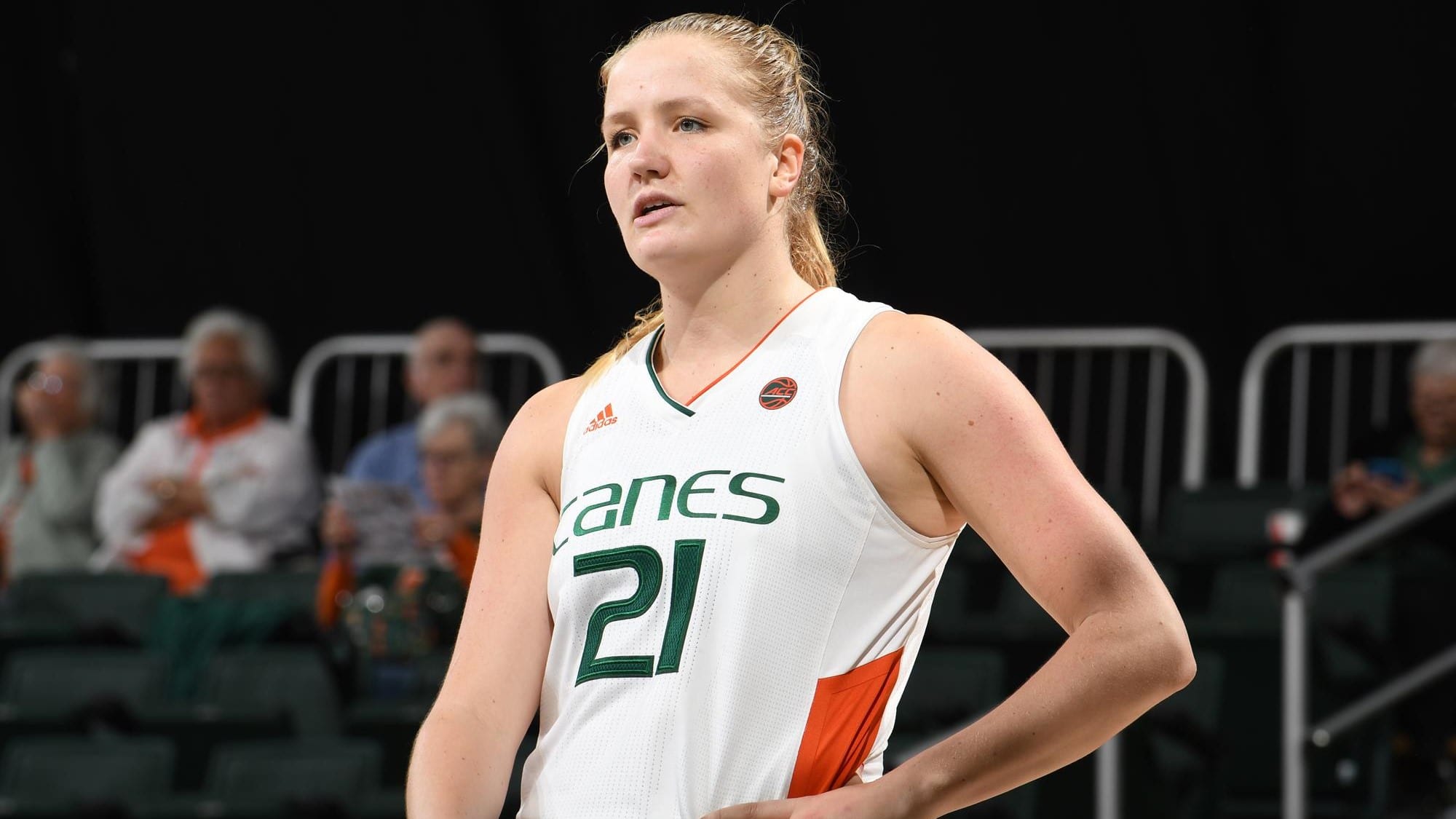 Emese Hof is now in her fourth, and final year with the Miami Hurricanes. After three previous appearances in the NCAA Tournament, she will have a final chance to have a good run. So far, her season is going great, as she was named the ESPNW’s player of the week , and the Hurricanes are doing a good job in the standings, and still have a chance to host the first games of the NCAA Tournament.

How do you celebrate an important win, such as against Louisville, with the team?

Yes, that was awesome. Everyone was really happy, and there was definitely a great vibe in the dressing room afterwards

Does a win against Louisville feel different than other wins?

This game was on national television, away at Louisville, and there were more than 12.000 fans in the audience, so that’s definitely an extra boost. Winning there is very special, but you have to focus on the next game quite quickly, as we play twice a week, and in the ACC all games are difficult.

Did you get a lot of reactions out of the Netherlands?

Yes, I did get quite a lot of messages and people are very proud, and I think it’s great that people are so involved.

One of your teammates is Laura Cornelius. Do you go back to speaking Dutch during games?

Definitely, if we have to go over something quickly (and the rest doesn’t necessarily have to know). But also tactical things that we’ve seen before, it’s just a bit quicker and clearer in Dutch.

Why did you choose to go to Miami?

I visited Vanderbilt, Syracuse and Miami, and all places were great. Eventually, I chose for Miami as I clicked with the coaching staff (and especially Katie Meier), and of course the weather was a plus.

Great, it’s good to be able to bike to practice in shorts every day. I live with Laura and a Dutch golfer, Dewi, and we adopted a dog together 1,5 years ago, Buddy, so it definitely feels like a second home now.

How are your studies?

Very well, I’ve finished all my difficult courses, and now I just have to finish some other courses and my internship. If that goes well, I’ll have my bachelors in May.

You’re in your senior year. Do you almost feel American now?

Ha, well I don’t feel American, but I think I’ve become a lot more comfortable in the culture, and how everything works. It did take a while before I understood how the NCAA/ACC rankings worked.

Do you have any idea what your basket future is going to look like after this year?

Not exactly, but I do know that I want to play professionally after this. It depends on which teams would want me, so I’ll have to wait on that.

How did the team grow the last three (almost four) years?

This year, we have a couple of players who are returning from a long injury: Laura, Khaila Becca, and the addition of Beatrice, so that gives us a lot of (extra) experience. Besides that, we’ve a group of very talented sophomores, who had to/could play a lot in their first year, so they definitely know what needs to be done. Altogether, that makes us a quite balanced and experienced team.

Did College Basketball turn out to be how you expected it?

To be fair, I couldn’t really imagine it beforehand, but it did take some getting used to in the beginning. It is great, but also quite heavy. During the season, you’ll be either in class or the gym six days per week, and you play two games per week, one of which is an away game. That has quite an impact on your body, but the basketball is so much bigger here, and we have a very well equipped facilities and staff here. That will be something to get used to if you go pro, as it’s a lot less luxury there.

You are a very good rebounder. How does that become a specialty?

I think a small part of it is the strength, and to anticipate where the ball will be, but the biggest part is the mindset. Focus on rebounding, as you sometimes just forget to do it with everything that happens around you.

Up until now, you’ve made it to the NCAA tournament every year. Is that going to happen this year as well? And what will be your goal?

You’ve been to the Tournament three times before. Can you compare it to anything else?

March Madness can’t really be compared to anything else, it’s so huge here, and there’s so much at stake. It’s awesome to be a part of, and everything can happen, especially because there’s a knock-out system.

Yes, I take in everything, and it’s really great, but we still have an important and big part of the season left, so it doesn’t mean a lot anymore as soon as the next game begins. At that point, I’ll just have to give my best again, and it doesn’t matter what you’ve done the games before.

Did you expect the nomination for Player of the Week?

No, I didn’t. My weekend was already great after we beat Louisville, so it was a nice bonus, and a nice recognition. My teammates were very happy for me, that was very sweet.

This year, all your stats went up. Is there a reason for that?

Some of it went natural, but I really tried hard to get more in shape, and after a couple of bumps, it’s definitely going better now. Especially as it’s my last year, my mindset has changed. You aren’t able to ‘hide’ behind other players as much, I feel more responsibility and I have some more confidence.