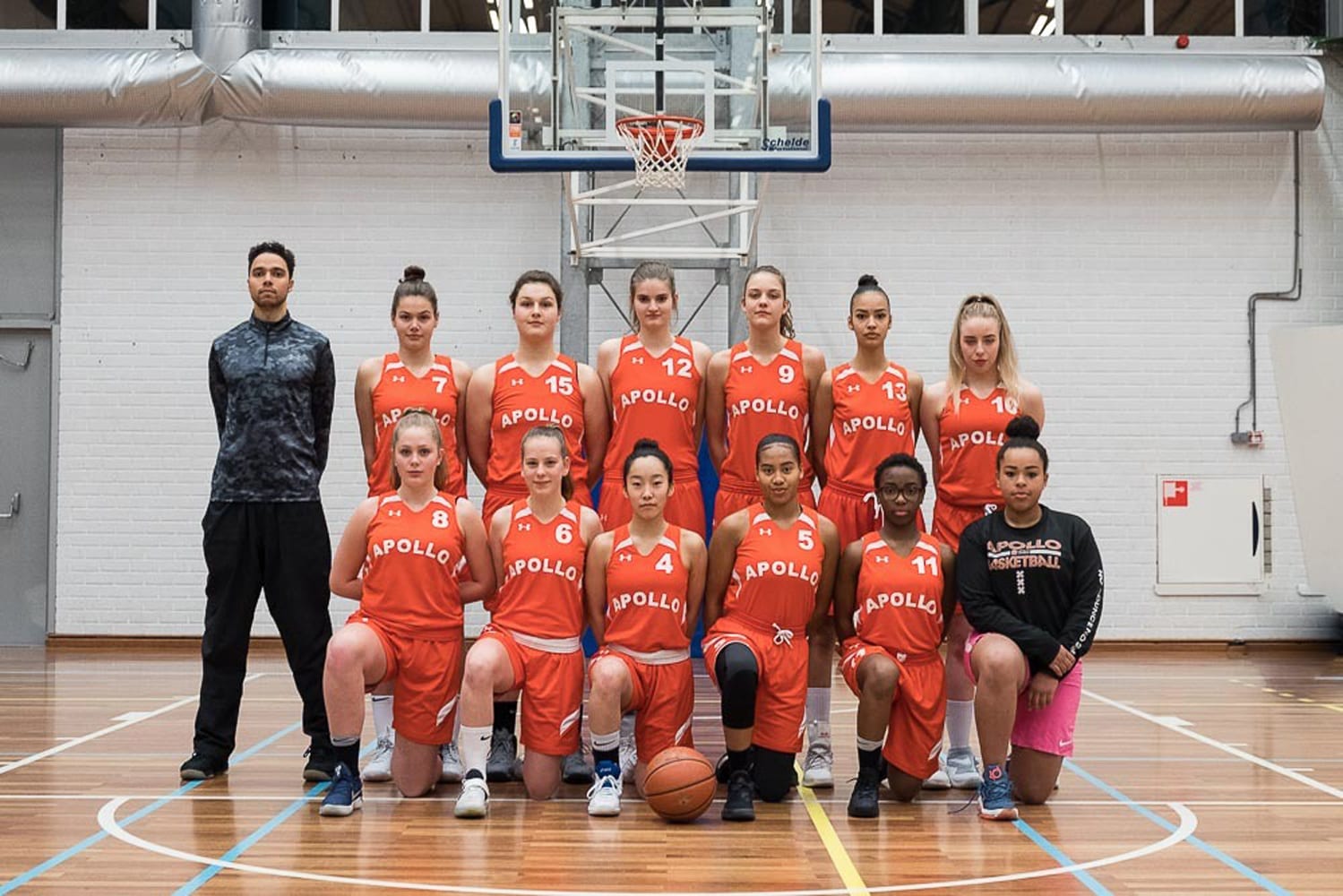 Floor van der Kolk is a promising center who plays for the u16 and u18 team of BC Apollo. A couple of weeks ago, she won a silver medal with her team at the Girona Basket Tournament in Spain.

Well, my best friend at school visited practice at BC Apollo, which was called Mosquito’s back then, just before Mosquito’s and Lely were merged. I also went to the Apollohal to visit her practice and I absolutely loved it! Since then I officially became a basketball player. I was about eight years old.

The rest of my family doesn’t play basketball, they play hockey.The hockey-coach of my sister always asks me when I will start playing hockey, but I was always like ‘no sorry, I will always play basketball’. I didn’t like hockey at all, I used to do kickboxing, but basketball is my biggest passion.

Have you ever played basketball somewhere else?

I always stayed here at Apollo. They changed their names a couple of times, like Mosquito’s, CBA, and now back at Apollo.

I am a physical player. I am always looking for contact with my opponent, even though my coach Felix Lechner wants me to look for more. After many games I got bruises everywhere most of the time, but that my style of playing basketball.

What kind of coach is Felix Lechner?

Someone you can learn a lot with. Sure, when you do something wrong, you will know it; also when you do something really good. But I have learned a lot from him. He is very kind, one of the best coaches I ever got. Sometimes I feel insecure about how I played a game, so he gives me a lot of feedback when I want to know how to improve my style of basketball.

I think I want to improve my post moves. Although I know some of those moves, it’s not that I immediately know what to do when I got the rebound. I also want to finish directly, because I do grab many rebounds and get the second chance points, but not finish the ball in one time. Well, not that many times.

What the most important thing you have learned this season?

To take some time when I got the ball, not to be in panic. Just to look at your teammates you can pass the ball to or finish the basket by myself when I have enough space. I think that’s what coach Felix thought me to get better.

Can you describe what basketball means to you?

Winning means to me that you worked hard to be the better team. That’s what gives me a lot of satisfaction within basketball. Not only that, also that team effort makes you win more games. The feeling that you can only win when you work together and a lot of friendship you get with the teammates that makes this so wonderful

What is your favorite NBA team?

Well, I watch the NBA sometimes, but not that much to know what team I like most.

Do you have a specific playlist you listen to before a game?

Well, me and my teammates made a playlist at Spotify. When we need to be more awake we turn on the playlist. It has some tracks like No Limit, or 18 PLUS, Stormzy – Shut Up, The Way It Goes. Those tracks can give us more energy during practice. 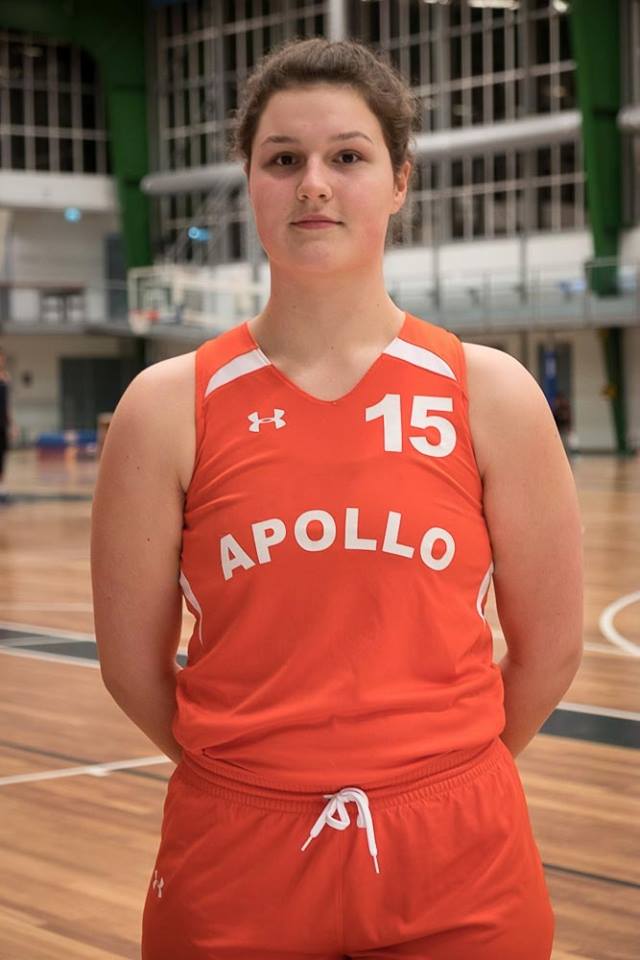 Do you have a specific daily routine?

Well I go to school every working day. After school a do some of my homework, a couple of hours before I have practice. Then I go to practice for two hours. I play basketball almost every day of the week, except for Fridays and sometimes on Sundays. So I often have to say to my friends ‘sorry I can’t come, I got to go to practice’. But it’s not that I don’t like it, I love this sport!

Does Apollo feel like a second family to you?

Oh yes, certainly! Especially with the girls I play with right now. I quit playing basketball two years ago because my joints hurt too much. When I starting playing again, I was afraid that I didn’t have the skills I used to have. But then I reunited with a lot of girls I have known since I am 8 years old. It’s amazing to spend much time with each other.

You are a volunteer at the Men’s 1 team. Why did you choose to do that?

I really like to watch games of the professional team in the Dutch Basketball League. You get to know a lot of other individuals who love this sport so much. Everyone is very nice to each other and we want to win with everyone together as volunteer and supporter.

What do you want to achieve?

What I really hope to achieve is that I will play at the U20 Eredivisie. I never thought I would play in the Second Division and that I would go to Spain to play a tournament. Still, I am very happy to be where I am right now.

How did you experience the Girona Basket Tournament?

It’s very different. The rules are a little different, because I think you can make some more contact. Like I said, I love making contact with my opponent, so that was very handy to me. Their type of playing is different. They don’t expect how you play your game. It’s difficult to say, because it was so overwhelming. During the finals, a couple of Spanish teams supported us. It was like ‘GO APOLLO!!

And the silver medal?

When the last game ended, I was kind of disappointed, because we fought so hard to try to win the game. But right now, when I look back at it, it was so amazing that we made it this far. We played like we would have played together for years! The team effort was so good, everyone helped each other. We only wanted to be first or second, not to be third or fourth. It was a very nice experience! I am very proud of this team!

What is your experience with 3×3 basketball?

Where do you see yourself in five years?

I hope I played in the U20 Eredivsie. I will always play basketball, but right now I don’t know how and where.