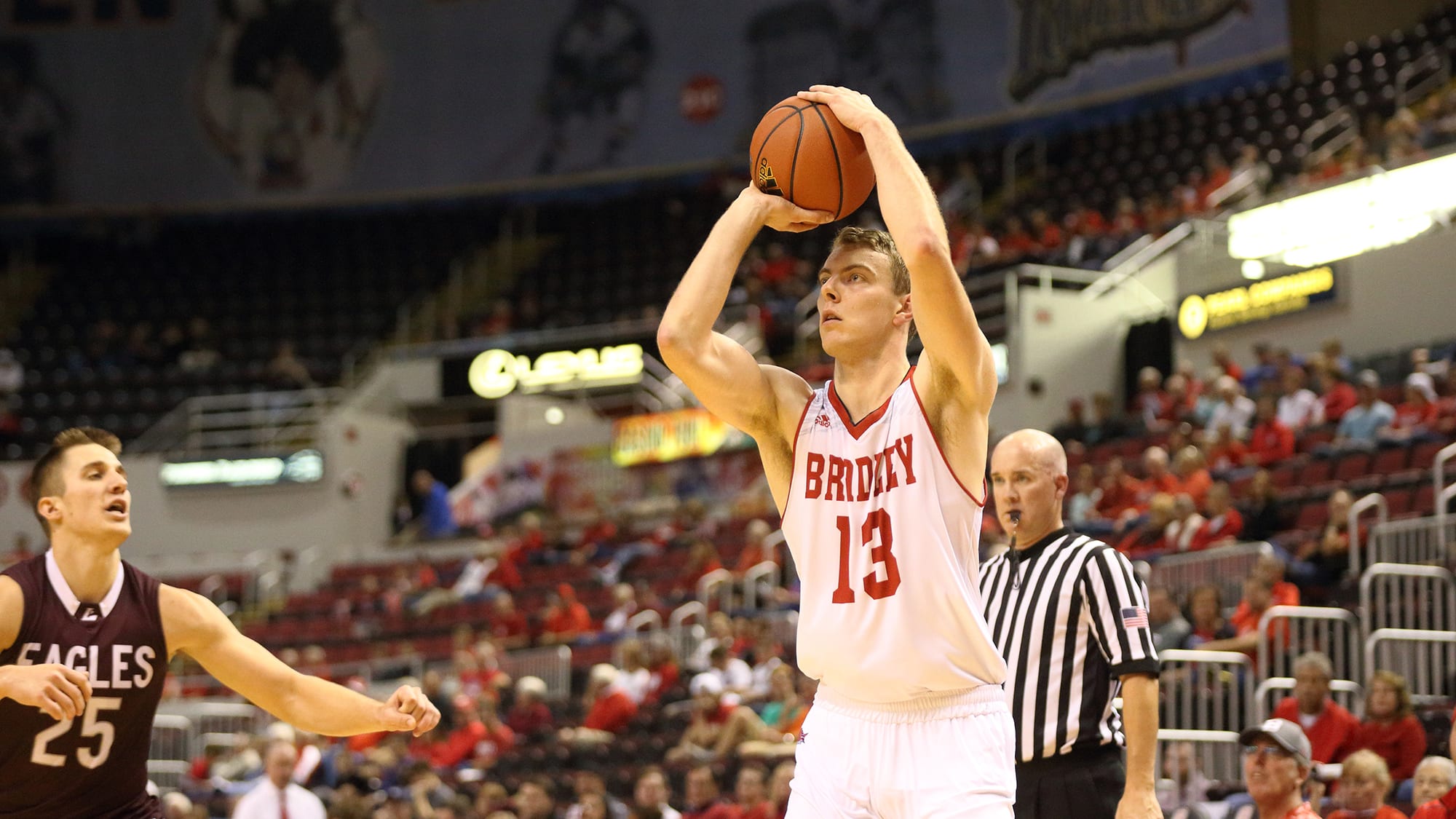 Luuk van Bree is a senior with the Bradley University Braves in Illinois. This Summer, he got the chance to travel with his team to the Netherlands to play exhibition games, and show his teammates his country, but now his focus lies completely on the college season.

This is your fourth year with Bradley. How’s life in Illinois?

I have to say that there have been a lot of ups-and-downs the past four years, but overall, my time here has been good. I’m very happy with all that I’ve experienced and growth that I’ve had, both in basketball as well as personally.

How is the college life in Illinois?

It’s quite busy, especially right now during the season. Besides practicing, playing, travelling, college and studying, there’s not a lot of time left for other things. I don’t think my time here can be compared to the life of a ‘normal’ student, as I spent so much time on basketball. Sometimes, I wonder how it would be to be a ‘normal’ student.

Is basketball the biggest sport at Bradley?

Yes, we don’t have an American Football team, so basketball is the biggest sport, not only of the university, but also of the city, Peoria. We play in an arena with a capacity of 11.500 spectators and most of them are locals, and not students.

Have you become part American after four years?

No, on the contrary, I think I’ve started to feel more Dutch than I did before.

Did you celebrate Thanksgiving as a team?

Yes! On Thanksgiving, we were travelling back home from a tournament in Mexico, but after we arrived in Peoria, the grandmother and mother of point guard Darrel Brown cooked a Thanksgiving dinner for us. It was really good!

Why did you choose to go to Bradley?

Honestly, it all went really fast. I came in contact with Bradley through Facebook, and they offered me a full-scholarship. It was the chance for me to play in one of the best competitions (Missouri Valley Conference) and immediately get minutes at the same time. On top of that, Bradley was an academically highly-praised university, something that was also very important to me. When I got the offer, I accepted it. This choice worked out well for me, but if I had to do it again, I would look into it a bit more.

In your first season with Bradley(2015-2016), there were 10 freshmen in the team. You were the youngest team of the 351 Division I teams. How did you experience that?

It was the first year of coach Wardle and that meant it was almost a completely new and young team. In that regard, I really came at the beginning. Actually, I only realize now how strange that season was, without any experience and leadership within the team.

You lost a lot the first year, 27 times and only won 5 games. Did you ever doubt your choice?

That was definitely a difficult year, especially mentally. Of course, we knew that we had a young team, but you still have high expectations as a player. I had a hard time working through all the setbacks that year. I took all losses very personally, and, for example, almost didn’t sleep after we lost a game.

There were definitely moments when I asked myself what I was doing there. We didn’t have a lot of older players that could help us to put it all in perspective. That is something I try to help my younger teammates with now. My first year with Bradley forced me to deal with losses better. As you play two or three times per week, you can’t stay in the past. I still don’t like losing, but I can let it slide faster, and focus on the future.

After that, you improved each season. Last year, you even won 20 games. How was it to grow each year as a team?

It is a very nice and especially educational experience, which is still going on. It is clear that the culture and enthusiasm within Bradley basketball has changed, both on and off the court. That I’ve been able to contribute to that, is something I’m proud of.

Can you describe your role on the team?

On the court, I’m an offensive threat. Within our system, I try to look for my shots as aggressively as possible. On defense, I try to be as solid as possible, and defend well positionally within our team defense.

I’ve been one of the older and more experienced players since I arrived here, and with that comes a leadership role on the court as well as off the court. I’m not always the most emotional or loudest, but I try to be consequent and direct in my communication with teammates and coaches. I’m still growing in my leadership role, but I think I’m definitely making steps.

You’re tall, 2.03m, a shooter and you’re also still quite agile with all the steals you grab. What is your strong point?

My strong point is my shot, but I think I’m pretty all-round. I like playing in the post, but because of my shot, and because I’m pretty agile for my height, I can play outside the three-point pretty as well.

You’ve had a strong start this season, 6 wins and 1 loss. What is your goal?

We want to compete for the championship in the Missouri Valley Conference and try to qualify ourselves for March Madness.

I saw that your role in the game is defined by whether your shot is falling or not? Is that difficult?

I don’t completely agree with that. I’ve had several games in my career where my shot wasn’t falling, but I still had an important role in the game. I do see myself as a shooter, so it’s my task to hit those shots. If I miss too many, and I’m benched because of that, I can accept that. That might put a bit of pressure on me, but I think the trust in my shot is bigger than the pressure; in the end I practice every day on the shots I take in the game.

You and the team traveled through Europe last summer and played games in England and the Netherlands. How was that for you?

It was a very special experience. It was strange to walk through Amsterdam with my teammates, felt a bit like two worlds came together. It was also fun to play a game for friends and family, I really enjoyed that.

How did your teammates react to the Netherlands?

They thought it was fantastic! Although they actually have seen very little, we were in Amsterdam for a little over 48 hours and in that time we practiced and played a game. Yet I was able to show them a couple of things and they were all very enthusiastic. Many have already said that they want to come back again.

You come from Helmond and played for Den Bosch as a youngster. Did you already have the idea in youth that you wanted to go to America?

No, not at all actually. I entered one of the youth teams of Den Bosch when I was 16 and was not that busy with the future. We had a very talented class and in the two years that I played in Den Bosch we became Dutch champion three times, 2 times with the u18 and 1 time with the u20. At the end of my second year in Den Bosch, I got my VWO diploma and I had to make a choice about my future. Then I chose to try to play college basketball in America.

You took a detour to get to Bradley. First you played at the CBA on the Canary Islands. What did you learn there that you were then ready to make the step to America?

I have had a lot of practice hours at CBA, it also helped me to become more independent. When I joined Bradley I knew what it was like to be away from home. I also have played games in the LEB Plata (3rd professional league in Spain) at the professional level. I’ve learned a lot in those games.

You’re now in your last year with Bradley. What does your (basketball) future look like?

As I said, we will try to compete for the championship with Bradley, and that is where my focus is on right now. I hope that I get the chance to play some professional basketball, but how or what exactly I will see after this season.

Are you still following basketball in the Netherlands? And especially the ‘Bossche’ basketball?

Hell yes! And it looks like basketball in the Netherlands is on the rise. Leiden, Groningen and Den Bosch are doing well in Europe. And also with the Dutch Team, I think the upward trend has started in recent years. I follow Den Bosch in particular through social media and as far as possible I watch all matches from Den Bosch via the livestream.

We Are All In To Do Something Big Together