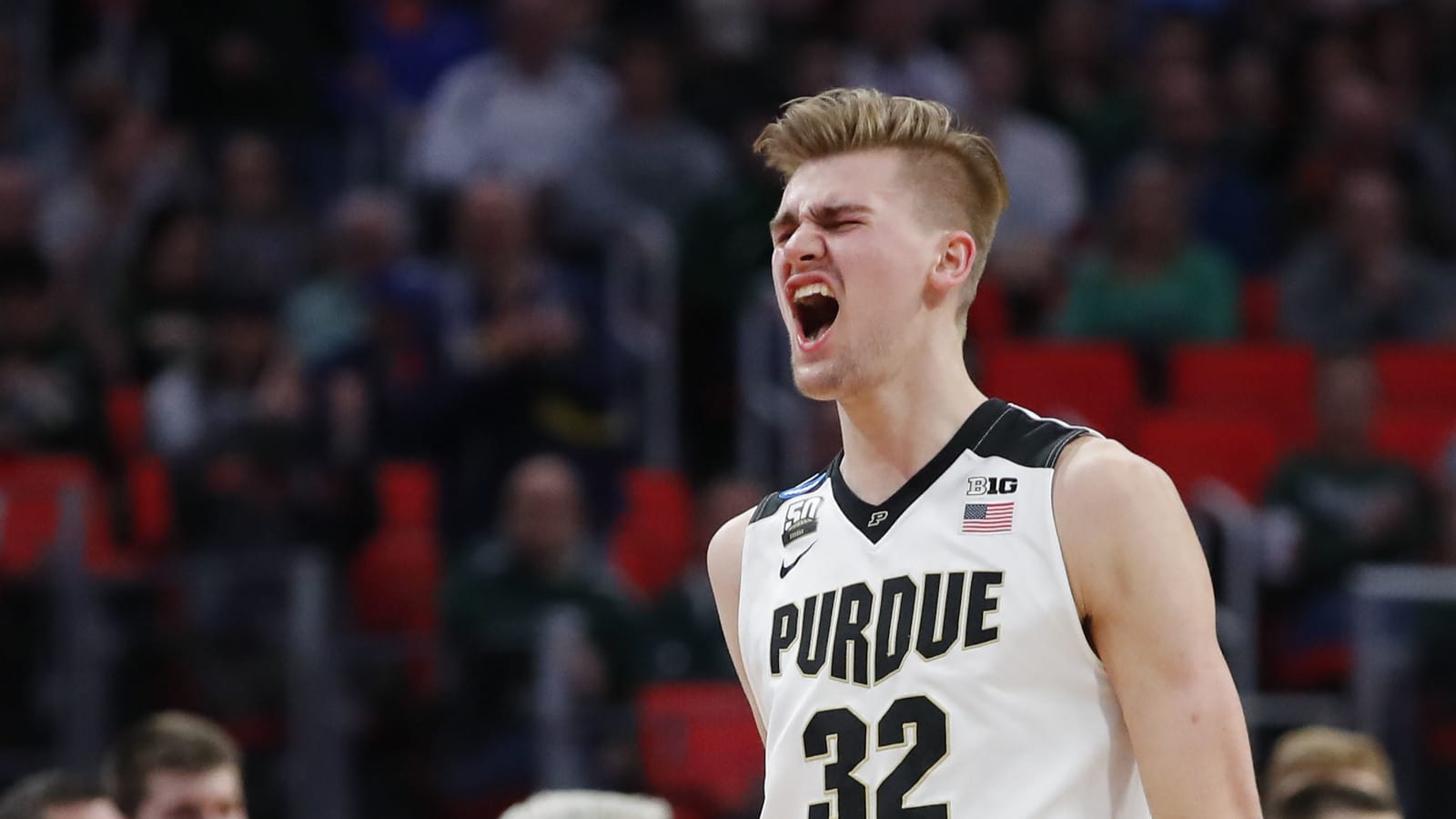 Can it happen? Another Dutch player in the NBA? Matt Haarms still has a long way to go, but the potential is definitely there. It’s quite a bit of pressure, but Matt Haarms seems to be able to deal with it. He’s found a home with the Purdue Boilermakers, and this will be his year, as several important players have graduated, and he’s expected to step up his game.

Of course, Haarms already showed that he could take on a bigger role in last year’s NCAA Tournament when the starting center Isaac Haas fractured his elbow in their first round game. Haarms averaged a bit over 15 minutes per game throughout the season, but ended up almost doubling his minutes against Butler, when he played 29 minutes.

Now, after spending all summer to preparing, improving his skills and getting stronger, Haarms is ready for the upcoming season.

How are you doing?

I’m doing really well, we’re now in the middle of getting ready for the new season as a team. So we’re all totally ready to start again.

This summer was very important for me in terms of developing my skills, strength is always a big part of our summers. Three or four times a week we do strength and conditioning, but this year, I was shooting a lot and working on other things that can really help me with basketball. That way, I’m ready to take on a bigger role in our team this year.

Is the strength coach your biggest friend during the off-season?

You see the strength coach almost every day, we had a program in the summer where we had a work-out session three times a week whenever we wanted, and also a conditioning work-out four times a week. This is possible in the off-season, as our practice time with basketball is limited, so our strength coach has the opportunity to train a lot more with us.

What is your goal for the upcoming season?

This year, it’s very important to me that I can grow on what I did last year. We lost four seniors from last season, so it’s important that we can fill their gaps as a team, and I hope I can be a big part of that.

The big men that were in front of you have left Purdue. This means you’ll get a bigger role. What’s your take on that?

I see it as taking a very similar role on the team, but in my own style. Isaac Haas is a completely different player than me, but I can score in the same manner, from the low post. What I can add is that I can shoot from the outside.

Are we going to see you shoot three-pointers?

Yes, that’s something I’ve spent the most time on this summer. Nowadays, it’s very important to have as much players as possible on the court who can take that shot, to have better spacing on the court. If I’m a threat to take that shot, they’ll have to defend me on the three-point line, which gives our guards much more room to drive.

A few years ago, you left the Netherlands because of a dream. First you went to Spain. Then, via High School to Purdue. Are you still on schedule?

My path here is quite strange, but now, if I look back, I’m extremely satisfied with how it went. I’ve learned unique things every place I went that all help me to not only be a better basketball player, but also a better person, as I learned so much by being away from home and dealing with adversity.

Was it difficult to take that step?

Yes, especially when I chose to leave Spain for the United States. Even though I was already far away from home, the States felt so much further, and I was very unsure if I was going to make it there. Luckily, I ended up on a great school, where they helped me enormously and I could make a good transition to American basketball.

Who were your examples when you were younger?

When I started playing basketball, I was a huge fan of Dwight Howard and Yao Ming. I loved how those big guys did so well in the NBA, and how Dwight could dunk. Now, I’m still more fan of centers and power forwards.

You’ve become a well-known athlete ever since the NCAA Tournament. Especially after the game against Butler. What do you think about that?

It doesn’t really feel any different to me. I was pretty well-known on campus throughout the year, and it wasn’t very different after the game against Butler. Our students are always very supportive about basketball, so I already felt quite well-known in West Lafayette.

Can you laugh about the videos about your hair?

Yes of course, I have no problem with it at all. Most of what I see is positive, and I don’t pay any attention to the negative. It’s up to me now that I’m also a very good basketball player.

What did you learn from the NCAA tournament? You’ve played very well there, and your role increased after Isaac Haas’ injury.

The NCAA Tournament is a very special atmosphere, because every game can be your last. So, you really learn to give it your all every game. The tank has to be completely empty after such a game, because there might not be a next game to prepare for. Everything is going at a faster pace in the tournament. I thought at the start of the conference play, the pace would be the highest, but everyone is at its best in the tournament.

Butler, for example, we played against them in December at the Crossroads Classic, and we won by about 15 points, but in the tournament, it looked like a completely different team. The offense was much faster and tighter, and the defense had more intensity as well, and I think they would say the same about us.

Very well, we have a really nice campus in West Lafayette and I live directly across from the stadium, so I have everything I need in the neighborhood. In terms of the support, the fans are really crazy about basketball.

I don’t have a lot of time to be at home during the summer, as we’re expected to be back in early June for the start of our summer school program. I did practice with the Dutch B selection, and I had the chance to make it into the A-selection, but unfortunately I had to return to Purdue for school. Playing for the Dutch national team is definitely a dream for me, so I’m trying as hard as possible to show my face to the coaches.

Do you see yourself playing for the Dutch national team in the future? There’s a very talented generation right now. Do you discuss this with players in the Netherlands you know from your time there?

I don’t talk about it a lot, but of course I can see the results, and it makes me really proud that we’re doing better. I hope I can be a part of it one day as well, when the Netherlands becomes a permanent member in the A pool.

What are you actually studying?

Did you know you have a Dutch predecessor at Purdue: Matthieu ten Dam?

Yes, I’ve heard that, but apart from seeing a team photo of his champion team, I haven’t seen that much.

What was the deciding factor for choosing Purdue?

Purdue had the perfect atmosphere, the coaches gave me a good honest story. Some coaches try to sell the university to you, but coach Painter gave me a fair story I could rely on. Besides that, I was a huge fan of the playing style, Purdue is known for the fact that they really use the bigs in the offense.

What are Purdue’s chances in the coming season?

I think we’re going to surprise a lot of people, we have the best player in college in Carsen Edwards, and I think that people underestimate how good the rest of the team is. There will be moments when it’s difficult, especially with such a young team.

What is your official height?

You’ve made an art of blocking shots. How do you learn that? Or has that always been there?

There’s a timing element that you can learn, and of course I’m pretty good at that, but besides that, I have a lot of height I can use to reach something that others can’t. I think that timing is difficult to learn, but if you have a good height or athletic ability, it’s certainly possible to be a good shotblocker.

Who will be the NBA Champion this season?

Houston Rockets, but that’s because I’m a huge fan, so I won’t let myself say anything else.

Do you watch NBA games to try and learn something from certain players?

We have a video service, where we can watch all scoring and defending clips of certain players. So, I often watch players I think can teach me something, like Porzingis, Dragan Bender, and in defense Rudy Gobert.

I heard people sometimes mistake you for Kristaps Porzingis. Is that true?

Once on a flight from New York, someone thought I was Porzingis. I do get the resemblance; same height, similar hair. But it’s never happened to me outside of New York.

I think you give it your all every day to get better. Is it difficult to keep that focus?

It has to become a routine, starting something is always difficult, but now that I have been doing it for so long, I don’t think about it anymore. I’m really a routine person, so once I’ve started something, I can keep doing it. It mainly comes down to whether you have the discipline to want to get better every day, and how competitive basketball should be.