Moniek Meeringa plays basketball for the Orange Lions Academy and Lekdetec Bemmel. She joined at the same time as her sister, Ellen Meeringa.

I am Moniek Meeringa, 17 years old. This is my third season at Orange Lions Academy and at Lekdetec Bemmel.

How did you get introduced to basketball?

Our family didn’t play basketball that much, besides our cousins, Ellen and I. At first, I played soccer. However, our soccer team wouldn’t stay together anymore. I started questioning myself ‘shall I keep playing soccer, our should I find another sport to do?’ Ellen already played basketball for one year, so I practiced at a basketball team and at a hockey team. I chose playing basketball.

Where have you played?

I started at Unlimited Elst along with Ellen. After one year, we moved to Arnhem Eagles. Ellen and I went to Batouwe in Bemmel, and Amsterdam asked us if we would like to join Orange Lions Academy. So Ellen and I played everywhere together!

I am more like a shooter. If I receive the ball, and create enough space, then I will shoot from beyond the arc. Besides that, I can give the team a lot of energy and speed.

Well, I want to be more athletic and getting stronger. 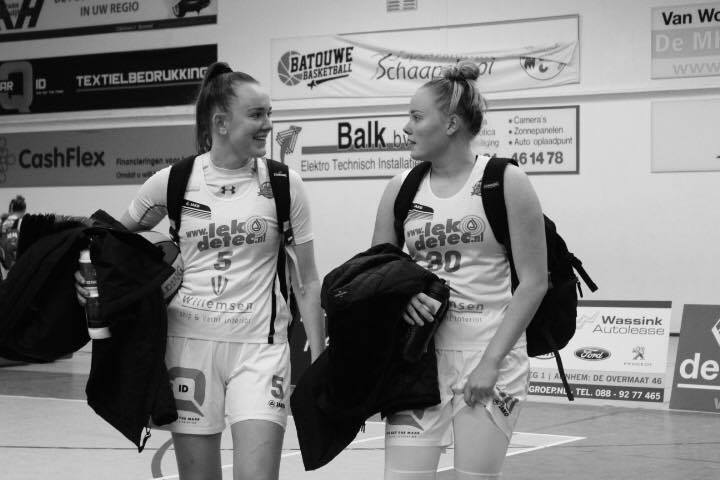 As you mentioned, you and Ellen were always together at every team you played. Are you a different kind of player than Ellen?

Ellen is a pretty smart player. She knows how to create space and opportunities within the team. I think I just go with the flow and shoot the ball when there is plenty of reason to do that.

At young age, you already played at the highest league of The Netherlands. How was it for you to play that kind of level already?

Awesome! It was our first season here in Amsterdam. I gained a lot of experience from my other team mates. At Bemmel, I learned a lot of our coach Gert-Jan van der Linden. How taught me a lot of ways to create space and to play basketball at this kind of level. It was pretty hard to play for Orange Lions Academy U20 and Lekdetec Bemmel, but I made it anyway.

You have been playing basketball at Lekdetec Bemmel for quite some time now. What do you enjoy about Bemmel?

Bemmel is very nice. After every game we go to the lobby of our home accommodation, just to talk about the game. Everyone in Bemmel likes it to see you play basketball there. It feels like home in here.

At the moment, you combine played basketball at Bemmel and Amsterdam. Can you describe your period in Amsterdam from the beginning until now?

At first, I had to get used to everything that came on to me in Amsterdam. Luckily, I had Ellen around me, so I wasn’t that alone. During my second year, I got used to everything already, though I played at Bemmel that season. It was pretty special to play with Bemmel against Amsterdam at the women U20 finals, and become the runner up. This year I decided to come back to Amsterdam and play there for this season. So I hope to reach the championship this season with Amsterdam.

Last year with Bemmel against Amsterdam. That game we beat Amsterdam with Bemmel, which was their first and only lost last year. We gave everything as a team.

I love to see Marine Johannès playing! She is such a great sharpshooter and has amazing dribble moves!

Have you ever been selected for the national youth teams?

I played with U15 a tournament a couple of years ago. I hope to be selected for the U18 team this summer!

What do you remember as an international for the U15 team?

It felt amazing to sing the national anthem as a player. When Ellen played for the U16 team, I watched every game. I really want to be selected again!

Does the U16, U18 and U20 teams of The Netherlands make any progression to you for that past few years?

Definitely! I think that we have a lot of new girls who make progression every day. To see those girls growing is just amazing! We are all in this together.