Italian Nicolo Melli Will Play for the New Orleans Pelicans

Roos Koopmans is only 20 years-old, but she already made her debut on the highest level of the Netherlands in the 2016-2017 season. That season, Koopmans already played several games for Rotterdam Basketball.

Last year, she made the step to go and play in Haren, but after only one season she returned to Binnenland Barendrecht. Let’s meet Roos Koopmans!

I am 20 years old. I live in Rotterdam, and I am playing basketball at Binnenland Barendrecht as a power forward / center.

When did you start playing basketball?

I was 10 years old. Back then, swimming was the type of sport I was doing. I made a list which sports I would like to do too. I chose many different kinds of sport, like basketball of course. I visited practice at the Hurricanes in Spijkenisse. From there, I officially started playing basketball.

Does your family play basketball?

My mother played basketball. She played for one year at the highest level, but torn her ACL and her Achilles heel. She quit when she was 20 years old.

I love playing in a team. Playing together is my style of playing. It is pretty quick either, and everyone on the court is always moving.

Like you said, you play as a power forward / center. Are you that kind of a center that makes contact within the bucket?

No not really. Within the team, we don’t have that kind of players right now. So I am more like a player who’s looking for shots just outside of the bucket. I am 1.80 m tall, so I think I am just too short for a center.

Improving my overall offense, like shooting and driving. And attack the basket as well. 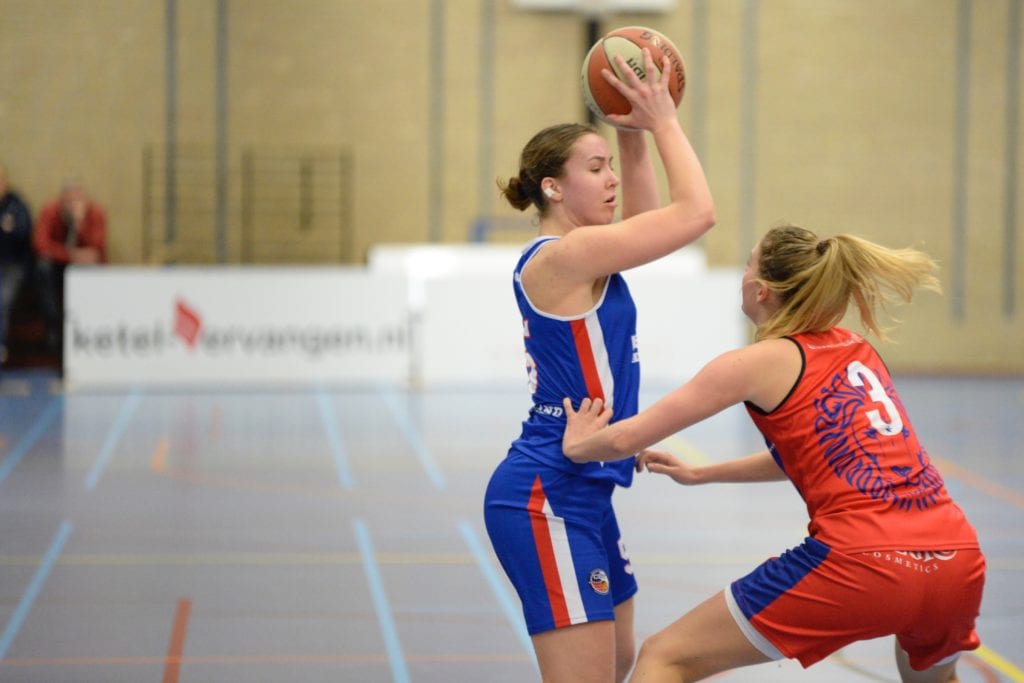 Last year you played for the debuting Keijser Capital Martini Sparks Haren in the highest league of The Netherlands. How was it for you to play for that kind of organization?

Really great! We all were on the same page and the same level. I can imagine that it’s good to play with better players in the team, but nevertheless, it is also nice to play with players who are pretty much on the same level as you are. We did win one game against Lekdetec Bemmel. I think we learned a lot that season.

After just one season, you returned to Binnenland again. What do you like about Binnenland?

I like that organization! It is a cozy place to be, and always nice after the game. Besides, I am still studying so it was easier for me to combine basketball and school here at Binnenland.

Starting this season, Binnenland won’t play with their steady players as Zera Butter and Maxime Essenstam. How is it for you to play with a lot of new players in this organization?

We still got to get used to each other. Nevertheless, it creates more opportunities for us and I think it’s good to play with a new team.

What is your favorite basketball moment?

Of course, but it is a pretty long time ago. That was at Binnenland against Grasshoppers. We played pretty good, although we lost that one. It was pretty crowded and played so good as a team. I really enjoyed that moment; playing for so many visitors!

Last summer, the Fiba 3×3 World Cup was held in Amsterdam. What do you think about 3×3?

I love it! It is so great that The Netherlands are doing well, like the women’s team won a couple of silver medals in the past few years.

Did you play 3×3 basketball before?

Yes I did. I played a couple of Streetball Masters Finals before.

What do you want to achieve in The Netherlands?

I don’t know to be honest. I just like to play basketball whenever I can. I want to be with the team and enjoy about it. So, no I just want to have fun.

You already played at the highest league of The Netherlands at quite a young age. How was it for you to play on that level?

Italian Nicolo Melli Will Play for the New Orleans Pelicans