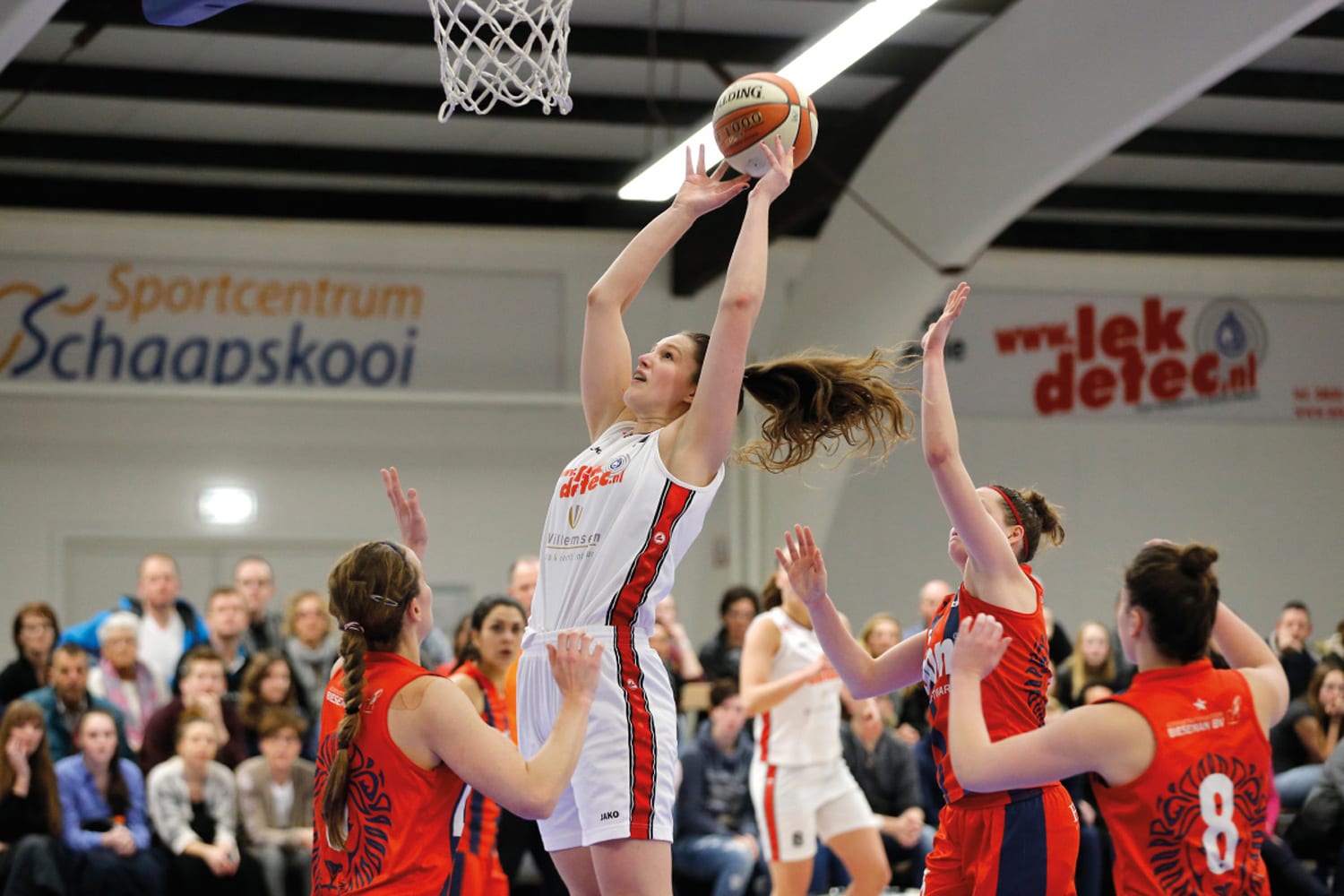 Last season she won the championship with Lekdetec Batouwe after almost an impossible mission. Rowie Jongeling explains what it’s like to play for Batouwe.

What makes basketball so fantastic?

In this sport you can decide on your own personal goals you want to achieve. That gives me a lot of satisfaction. Sometimes when I have nothing to do during summer I get a little grumpy, just because I get bored. I want to be outside, shoot the ball around with some friends. I think that’s what makes basketball so fantastic, just to be part of this sport.

How can you describe your style of playing?

Well, I am pretty tall, but lots of friends tell me that I should play more in the post. Even though, I prefer more like shooting from midrange or even long range. I still want to improve my post moves and strong finish inside.

How was it to play in the highest league of the Netherlands at 18 years old?

It was a mixed feeling for me. Just two weeks before summer I decided to play for CTO Amsterdam. I didn’t know what to study. Remy de Wit was the head coach, and also coach of the Orange Angels U18 where I played during summer 2011. He asked me to play for him at CTO. Before I debuted in the VBL I used to play in the U20 competition where I had a lot of space and possibilities. In the beginning in the VBL it was like ‘show me what you got.’ Right now, I can say that I learned a lot back then at CTO.

What did you learn at CTO?

Taking more responsibility and practicing a lot. In the morning we did a lot of training for strength. What I also learned is how to take care of your body, like finding a great balance between eating, practice, sleep, something like that.

Last season you won the title with Lekdetec Batouwe. You came from 1-3 to 4-3 in the best of seven. How did that happen?

Hmm good question! Well, in the regular season we only lost twice and won like 26 games. But even so, play-offs are different games to handle. All the other teams are more focused when it comes to the chance of winning the jackpot, which comes closer and closer in every game. Maybe it was meant to be, coming down with 1-3 which made us more focused to all the other games.

You played a couple of seasons for Grasshoppers. What is the main difference between when you played at Grasshoppers and last year?

When I started playing there, we started with a whole new and young team. It was searching for the right gameplay to become stronger. I think it became really stronger during my last season at Grasshoppers. It took some time to become as strong as they are now. They come closer to a trophy every year.

Last year in game 4, you missed the winning putback in the final seconds. The next game, you got 26 points and 4 of 5 three pointers. Did you want to redeem yourself in game 5?

You won the title with a great comeback. How did you experience that?

Absolutely amazing, but also pretty difficult because of some players like Lisanne de Jong and Lisa Schoen got injured and coaches who didn’t make it to the play-offs. It felt a little bit like we started with a strong team but became champions with a different team. We fought the whole season to become champions, and I think there were enough positive factors that made that happened. 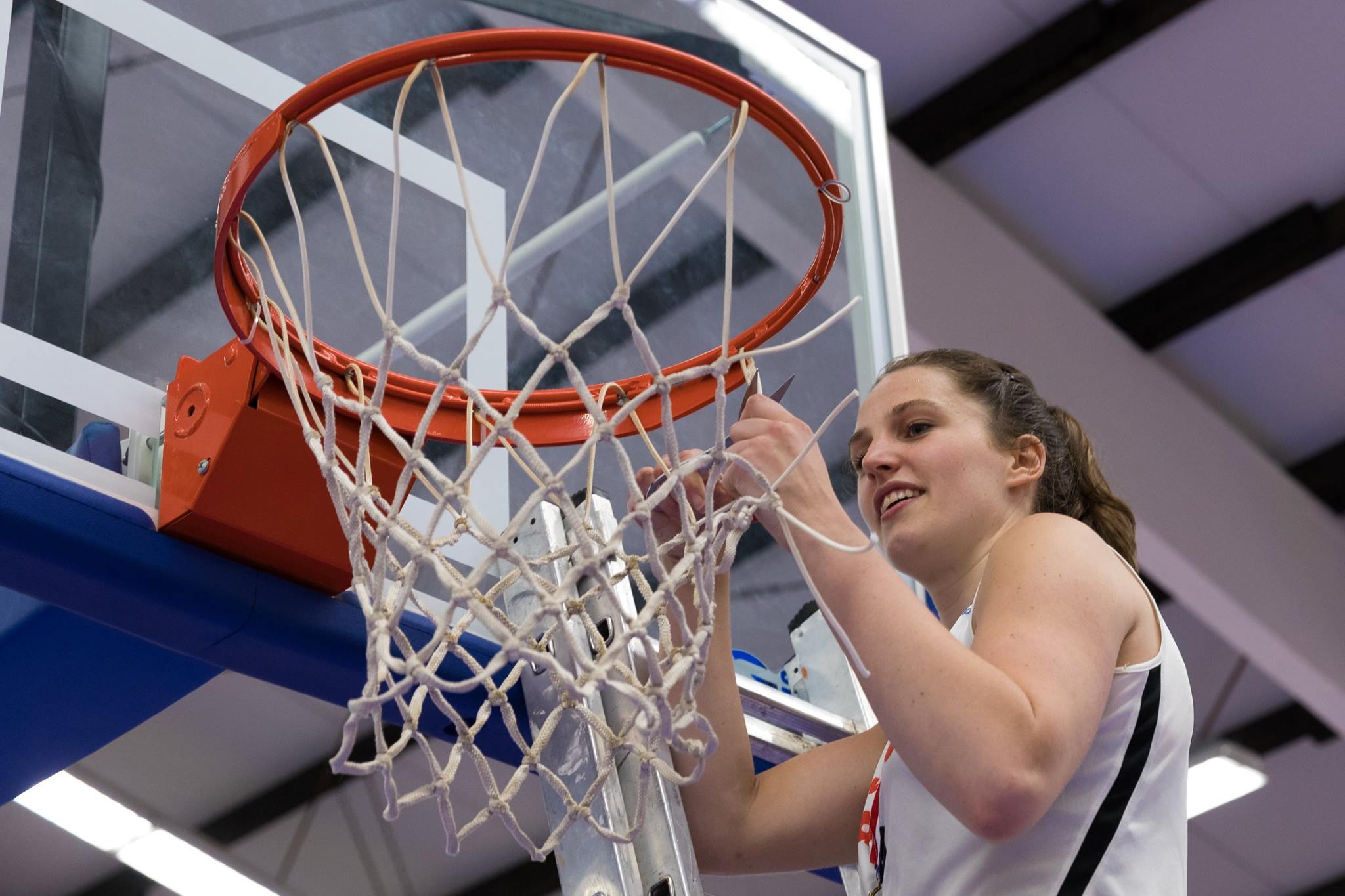 You’ve improved your three point-shooting since last season. How did you manage to improve your long-range shot?

I chose to practice on my long-range. At Bemmel we have a lot of shot-practice, we looked at each other’s percentage and I think I have improved my shot since last season because of that.

Your old teammates Karin Kuijt, Jacobine Klerx, Loyce and Jill Bettonville played in several 3×3 tournaments. What do you think of their performance?

I think it was fantastic in Amsterdam. To be honest, I love 3×3 basketball! I never played an official game. I was invited to practice. It was a great experience, and we will practice on 3×3 very soon.

What do you think about the basketball in the Netherlands?

“Good question. If I look at the structure of the competition I think it’s quite a pity that some teams can’t really measure themselves with other teams from their level. It’s also a pity that Amazone lost three players this season. They played pretty good at the beginning of this season. Another example, CTO had a lot of injured players. I am sure that they could’ve been a strong team. With that said, I think the competition would had a different ending than it had right now.”

What is Batouwe organizing for children’s basketball?

We organized a basketball school for children between 4 and 15 years old. Every Sunday they practice for two hours and during the week they practice two evenings. So in order to stimulate basketball in Bemmel, we want to attract many children to become one of us in the future.

How would you describe your experience as an international?

My first game with the Dutch national team was in Belgium. I was injured back then, so I thought I couldn’t play. But then suddenly, I got the order to get on the court which I didn’t expect. Not everyone can say that they played in an orange shirt. When I got invited last February to play with the Dutch team I think I screamed through the whole neighborhood ‘I CAN PLAY, I CAN PLAY!!’ My first youth experience was with the U16 team where we became the champions in Estonia. It’s so amazing to get invited as a sixteen-year-old girl and become the champion! After that I always got invited to the U18 and U20 team. Most of the time I was like the 12th player or something, but that doesn’t matter. I am there to practice and gain more experience.

You are also part of the Amsterdam Angels. What kind of organization is that?

Where do you see yourself in five years?

I want to achieve everything I want. I am very curious to see how it’s like to play outside of the Netherlands. I am not sure in with country I want to play, but I want to take a step out of my comfort-zone and see what it’s like.

Recently, Bemmel qualified for the best of five in the play-offs against Dozy Den Helder. The schedule for the next three games is right below: