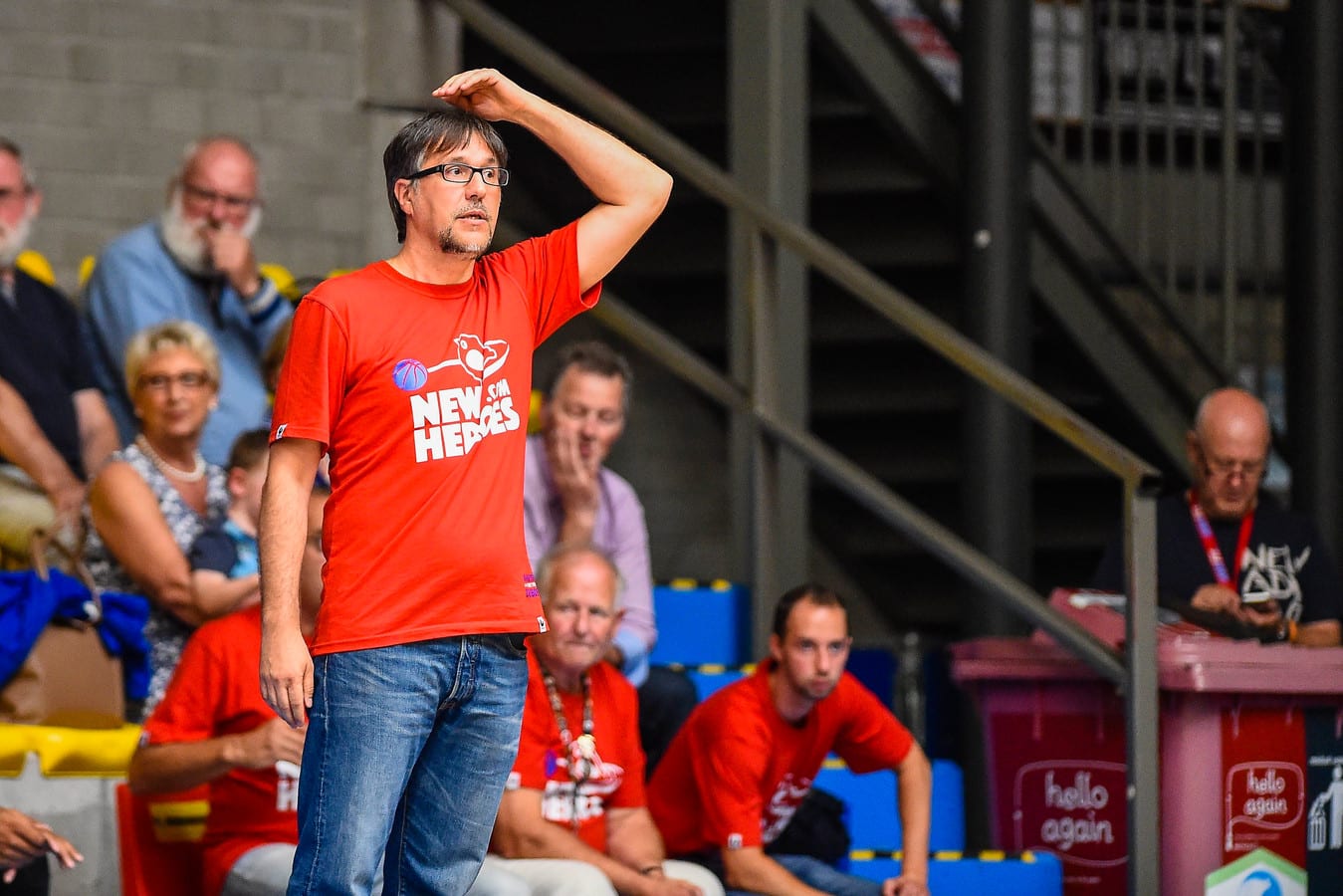 Silvano Poropat came to the Netherlands in the 2017-2018 season to become the new head coach of New Heroes Den Bosch. Now, 1,5 years later, even though his period as the New Heroes’ coach has ended, he has decided to continue living in the Netherlands, and to start his own company.

Poropat will use his experience as a coach in Croatia, Germany and the Netherlands to get basketball to a higher level. He will use the same experience to join the We are Basket team, and write about his findings, discuss his take on coaching, analyse teams, players and games, in his upcoming Coach Corner columns on this website.

When did you start your coaching career?

I started to coach at the age of 21, 26 years ago in Rovinj, Croatia, my hometown.

How did you end up coaching in Germany?

Went to a tournament in Germany as a coach of the youth team of Rovinj, where we did great. After that my friends, brothers Tokmadzic (Danijel and Benjamin), who are born in Germany, made contact with Ludwigsburg for me. They organized a tryout for me, which was successful, and BSG Ludwigsburg offered me a contract. Small salary, small one room apartment, but great people with a big heart were waiting for me.  That’s how it all started.

You have a lot of coaching experience in Germany. What is the biggest difference between Dutch and German basketball?

Overall in Germany they invest much much more in basketball (moneywise in clubs, but also in facilities, coaching education, referees education, players), and have created very high standards –  which automatically makes everything look better and bigger and nicer.  Important to know that basketball in Germany today is a product of investing and hard work of many years.

Your last coaching job was with Den Bosch. Are you still planning to become a head coach with a team, or are you focusing more on something else?

I have started my own company this January which is about coaching and consulting-coaches, players and teams. My intention is to use my knowledge and experiences to help players, coaches and teams to become the best they can be. As an end result basketball will become better. I still have the ambition to work as a head coach, if the right situation comes to me.

When did you start participating in coach clinics?

I started to participate in Coach clinics in Croatia, many years ago , as a young ambitious coach. Every year I participated at the Croatian National Coaches Clinic in Porec. In Germany when I became the first division coach in 2004, I started to give coach clinics. Last years I did a lot of clinics for the German Basketball Federation.

What do you see as your specialty, and how do you use that during the clinics?

I just like to talk about Basketball in all the ways – tactically, technically, mentally. And to show it in a practical way. Building a team, managing a team and how to think and win as an Underdog are my favorite topics.

If you could advise one thing to all coaches, what would it be?

I think that every Coach should be Authentic. Which means learn from everyone and educate yourself as much as you can, but don’t copy. For young Coaches to be patient and to Find a Mentor. A mentor will help you find solutions in a shorter way, and help you to grow as a coach but also as a person.

What do you think are the most important things/ingredients a team needs to be successful in league? What role does the coach play in all of that?

I think for a team to be successful you need a good organization behind the team, solid financial situation, clear rules and roles within the organization. Coach and the staff becomes the core of the basketball program if things I mentioned are good. Coach is the connection between players and management and this is like the core in your body connecting lower and upper body. Of course in order to win you need talent too, so good team with great players at the end will decide whether you win or not. We can say is a combination of more things that make a team successful. 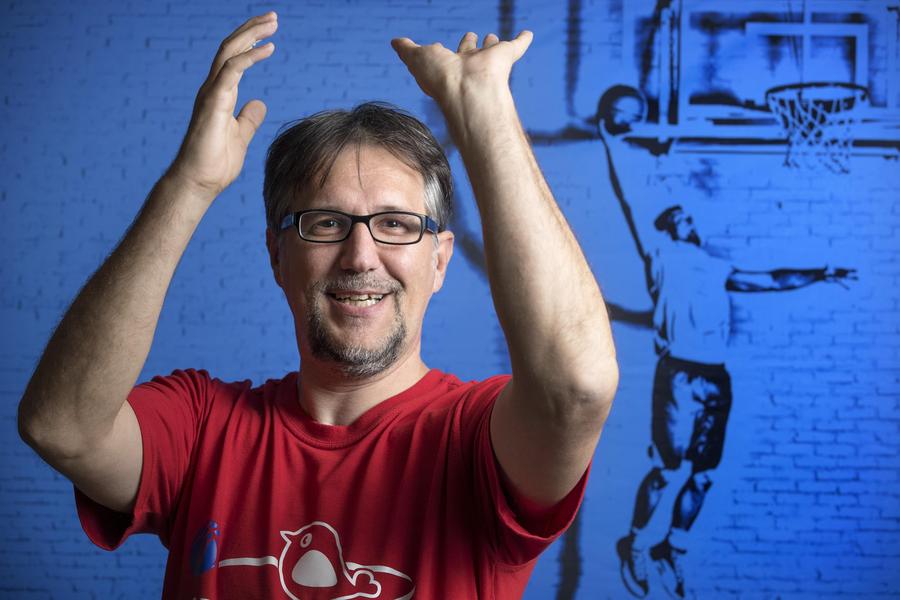 What is your role within the Dutch Basketball Coaches Association?

Dutch Basketball Coaches Association in person of Aernout Dorpmans asked me to help the program they have in educating coaches in form of Coach Clinics and Master Classes.  I am supposed to give clinics and to help Coaches in Holland to get better. This is what I like to do and I am thankful for the opportunity. I think this is a great opportunity especially for young coaches to learn, make contacts and breath basketball, for a normal price.

The first event of the DBCA of 2019 was during the Landstede  – Feyenord game this weekend. How did you experience that?

It was a great experience! The coaches came together, then we had a short presentation about Landstede club from Adriaan van Bergen. After that I gave the analyse of both teams (statistics, strengths, weaknesses) and a possible game plan. Then Herman van de Belt talked about his basketball vision, and we finished with my presentation about how to prepare a team for the game. We are looking forward to do more of this kind of clinics in the next weeks. I want to invite coaches to go the DBCA website and to sign in as it is a great opportunity to learn and make contacts.

Though you’re currently not active in the league as a coach, you’re still following the Dutch league. What are your thoughts on the first half on the season?

The most important thing I see from the first half of the season is that the Domination from Donar looks to be gone. Donar last year was on my opinion the best Dutch team over the last 20 years. The loss of Curry and Bruinsma they couldn’t compensate until now, and the fact that they are getting older doesn’t help them.

Second observation is that Leiden, Den Bosch and Zwolle got better , so this year we will have a real competition for the championship. Third, Dordrecht as a new team is a positive surprise and they will be dangerous for the top 4 teams . They have the potential to surprise. Den Helder I like the way they play and the way they improved. Aris maintained the same level I would say.

The two disappointments for me are Rotterdam and Amsterdam . I think that having good basketball programs in the biggest cities is crucial for the development of basketball, so I hope that this will change in the future. Weert with the youth concept is as expected in the last place and more concerned about developing players.

What’s the most important thing you’ve learned as the head coach of Den Bosch?

More things I could learn there, but last year showed me even more how important is the combination of more factors functioning in a proper way, in order to have success. On a personal level I have learned that to integrate in a new country is very important, so now I am taking a step with learning Dutch, so the whole process will be easier.

If you had to analyze your old team, Den Bosch, what would you say about their chances in the league this year?

As I said before Den Bosch has a much stronger and more experienced team then last year and if they will be healthy in the Playoffs they can go until the end.

Two teams, Leiden and Groningen are currently still active in Europe. What do you think they’ll have to improve to have a chance to reach the next round of the competition?

I think that Leiden must win all three remained games, as they lost with 40 in Denmark. For Donar the crucial game is on Wednesday, as they must win with at least seven-point difference, in order to keep the chance to go to the next round.

How do you see the future of Dutch Basketball?

I think that Holland is a country with great potential and high standard. So this has in some way to be translated into basketball. We need to find the way to invest more time, passion and money in everything in and around basketball (facilities, referees, coaches, players …), in order to come out of the European Basketball Periphery where we are right now. And as I mentioned before with great basketball programs in big cities the process will be much much easier. Best thing to do this is to start everyone with his own example.