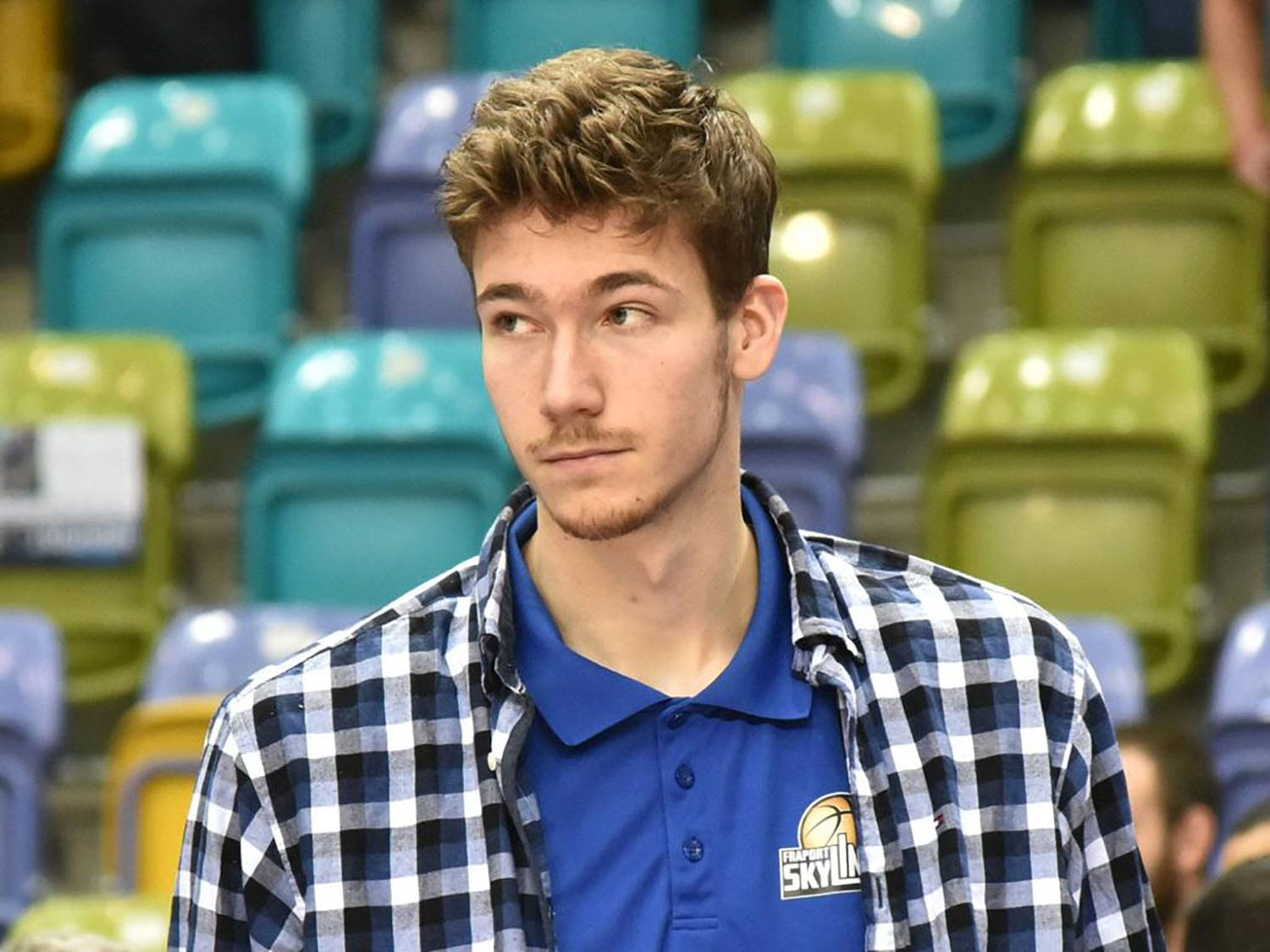 Daniel Mayr is a 22-year-old player of Fraport Skyliners in Frankfurt.  At the moment, he is recovering from a knee injury, but he is sure he will find his way back on the court soon. Before joining the team in Frankfurt, Mayr had already played for FC Bayern Basketball and Science City Jena.

Can you describe the basketball culture in Germany?

Basketball in Germany is almost like a big Family. Of course, you have your rivalries and so do all the fans, but all in all most of the time it’s a competitive but fair spirit between each other

Can you describe a normal day at Frankfurt? How many times per day/week do you practice?

I guess it’s almost the same like anywhere else except the NBA. Depending on the day, we  have a practice once or twice a day. If we practice twice a day, we have individual and physical workouts in the morning and team practice in the evening.

At the moment, you are recovering from a knee injury. How will this process go?

I’m on my way back to the Court. Around Christmas, I will start with individual basketball stuff and then we have to look how long my body needs to adapt to the physical stress.

Are you practicing with the team or do you have a personal trainer?

Is it difficult to stay motivated if your injury takes longer than expected? How do you deal with that?

You have your ups and downs especially if you’re out for so long. But in the end its a choice you have to make. You can step up or step aside and quit. Basketball is a huge part of my life and it pulls me to keep on working. I had bad days but even on those days I say to myself: ‘You have a goal, you want something so go and work for it. Rewards never come without sacrifices.’

At the moment, Frankfurt is in the 6th place. What are your expectations for the team this season?

We can definitively make the playoffs this year and after everything is possible. This year the teams in Germany a pretty equal. Every team can beat any other team and we showed that we have found our rhythm even we have to fight with injuries.

Your father, Rolf Mayr, was a German international. What is the most important thing that he taught you?

He taught me to have fun playing the game and to never quit. I think if you combine these two things you have to become somehow successful, if you’re willing to put in hard work.

Did you ever see your father play basketball (or see video’s)? can you recognize yourself in his style of play?

I grew up in the Gym, because he took me with him to his games and we played together a couple of times. But our style is different. Basketball wise, he grew up in a time where bigs had to dominate the zone. Meanwhile, I grew up with Dirk Nowitzki as leader of the new generation of bigs. But we still have some parts we share, like passing the ball. We both don’t need to be the topscorer as long as we win. So we can pass the ball if somebody has a better spot and we both like that pretty much.

Well it’s a mix of a Center and a Power forward. I guess I have to find my style again after the injury, but I like to shoot and penetrate, as well as I like to play with my back to the basket.

How do you become a good center? What is the most important thing you have to practice?

Today you have to be capable to defend Guards for at least one session. If you’re slow, many teams will use that. 10 Years ago everybody was afraid of the bigs in the Zone. Today if you’re big and slow they are going to pick you as the weakest link in the chain and drag you out from the zone to beat you with speed. So the most important thing is to be fast on your feet and that will be a big part of my practices.

Who is your basketball example?

I think Dirk Nowitzki is my main role model somehow. He changed the game of basketball and I can’t count all the things I could learn from him. Due to my situation, Maxi Kleber (the player of the Dallas Mavericks ed.) is an example for me as well. He helped me in bad times with advice to overcome my injury or to slow me down when I overdid it. I hope I can go an continue my career in an similar way as he did.

You have played for the German youth national team before. How did you experience that?

It was a lot of fun and an honor as well. You had the opportunity to play against the best players of your age and I made a lot of friends back then. So all in all it was a great experience. I always want to compete at the highest level and playing for your country includes that. And it’s always a great time being together with all these great players.

Do you follow any players on the senior German national team?

More or less, I follow everybody of the team, because I hope that I am going to be a part of the team in the future. I don’t know yet what I can or will learn from them. Maybe I will learn some new moves or I might be able to learn from their experience.

What is your goals for the future?

I want to play on the highest level possible for myself and i want to make the best out of what i have. I hope someday my way leads me right in the NBA but right now i m just happy if i make me first game for Frankfurt