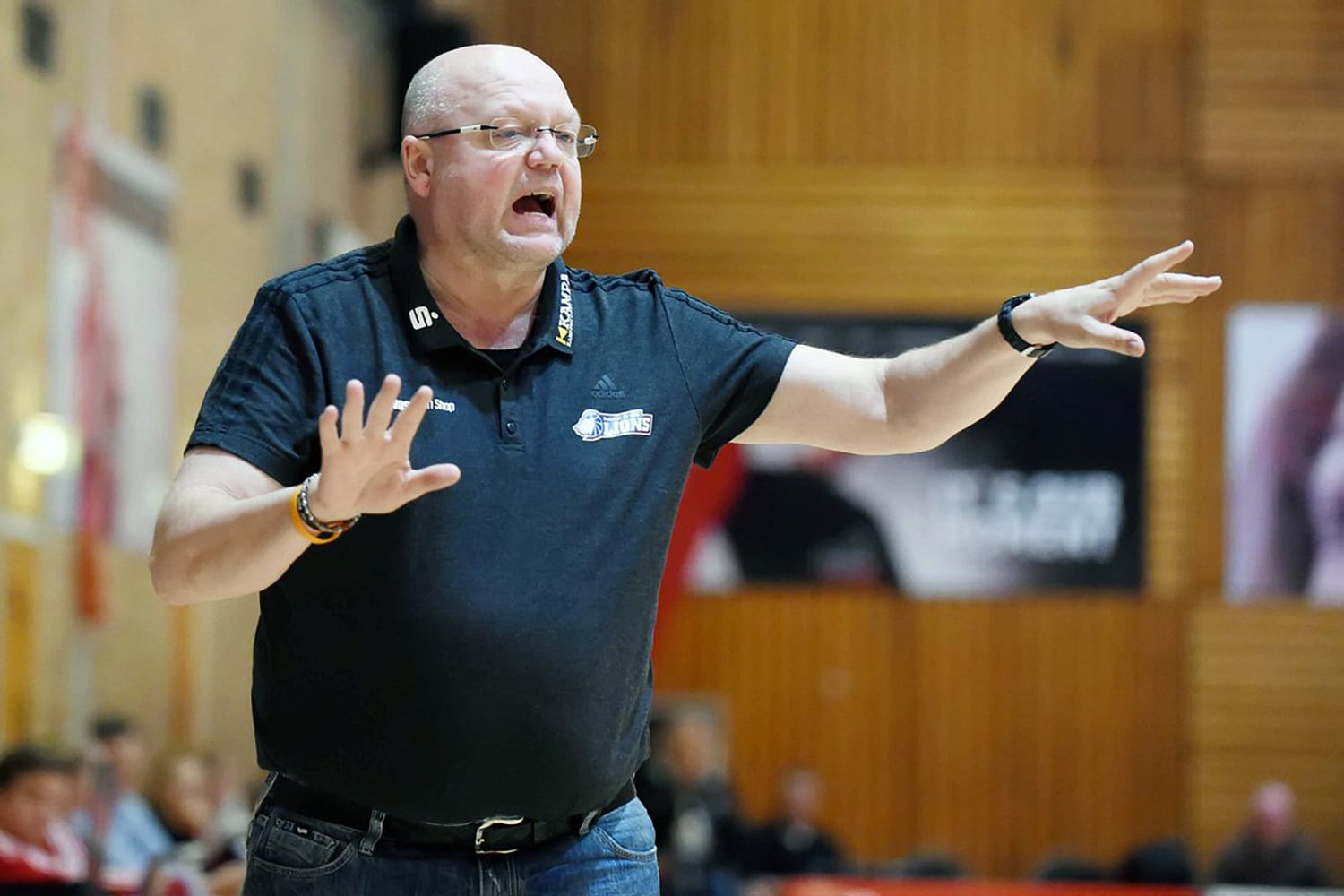 Catching up with Juliane Falk

René Spandauw is a Dutch coach, who has an extensive coaching resumé. Through the years, he has coached several Dutch National Team selections, made a name for himself as a coach in Germany, and he even won the coach of the year award in Germany three times. He won that award as a coach of the TV Saarlouis Royals, where he was the head coach for eleven years. In 2015, he begun a new chapter in his coaching career, as the head coach of GISA LIONS SV Halle.

Your roots are in the basketball city Groningen. What did you do there?

I started playing for BV Groningen, when I was 13-years-old. Bill Pijl, who was my teacher in geography, introduced me to the sport. I played for BVG and Celeritas, in the 2nd highest Dutch division. When I was 25 years old, I stopped playing basketball at a high level and focused on coaching. At 16-years-old, I started coaching my first team, the BVG girls u16.

Why did you started coaching?

As a player I was not going to make it to the highest level in the Netherlands. I was a very smart player and my technique was good, but I was slow and not athletic (which is still the same, by the way). I was also a referee at that time (in the 3rd Dutch division), but I enjoyed coaching more, so I decided to coach.

What is the most important thing you want to teach your players?

I want to develop them as players, but also as people.

What is the most important thing you learned during your time as an assistant-coach for Southern Mississippi and St. Josephs?

I especially know what I do not want to do. But you learn a lot about the preparation and analysis of games and players. You get to see a lot of new tactics to think about, and the organization surrounding the teams is great.

You also have been a European scout for the Charlotte Sting and Miami Sol in the WNBA. Do you look at the game in a different way as a scout than a coach?

You are there as a scout, so you look at what a player can and cannot do. Of course, at that time, you pay more attention to the individual than the game.

Did you scout any Dutch players at that time?

No, none. I remember that quite clearly.

Why did you start coaching in Germany?

Before I went to Germany, I worked for management consulting firm, which had a lot to do with sports management and sports organizations. That was a great job, but I had also been working as a coach besides that job. When I went to Germany in 2001, I was the head coach for the Dutch National Women Team u16. But, I wanted to try if I could make my passion my profession. And with your profession you have to earn some money, and that was not possible in the Netherlands, and certainly not in the women´s game, but it was possible in Germany.

What did you learn as a coach in Germany?

How to work hard, that networks are very important, that you function a lot better if people trust you, the influence of social media is ridiculously big, and that you have to have a connection with your players (if you coach women), but you do not have to become too close. Last, even in Germany, you have to interact with the board members in a certain way, to get along with them. In that sense, there is a similarity to the Netherlands 😉

What is the difference between Dutch- and German basketball?

The money. Right now, the men in Germany have a great league, which has a high quality of play, especially at the top. If you have money it is easier. The women’s league has more money than in the Netherlands as well, but in comparison to other countries in Europe, it is still a low end level. It is a pity however, that the product of the German Women´s league (called planet photo DBBL) has not become more professional, though there is more money available than in the Netherlands.

If you look at the style of basketball, I think the Dutch style is more creative and the German is more based on athleticism and structure.

How did you experience being voted coach of the year three times in Germany?

That was great of course, and very honorable. Maybe, I could even have won the award another time, but they did not give out the award that year. But, after a certificate and a gift voucher for the German HEMA (a Dutch department store) , it was done.

You have had several Dutch players in your team in Germany. How do you come in contact with those players?

I have a huge network, and I coached a couple of Dutch national teams. That is how I got a lot of contacts with Dutch players.

Your team has already played TC Herner, a club with several Dutch players. How do you think that the Dutch players are performing?

I think they are doing really well, and I think they are going to get even better, as some of them are still adapting to the level of competition. Karin ‘Koit’ (Kuijt), already has gotten an important role in Herne and she is playing quite convincingly.

You have had a lot of success as a coach, but at the moment your team is not doing very well in the competition. Is there a reason for that?

That is a long story, but I will be brief. We had a good pre-season, then a heavy schedule in the first five weeks. Four of those opponents are currently ranked 1 to 4 in the league. We lost our confidence and therefore we are now playing against ourselves and the referees. But we won 2 in a row now, so it looks like we are heading in the right direction.

Yes, I am and will always be a Dutchman, so I want to keep up-to-date with the Dutch basketball. The internet makes that quite easy. However, it is too far to occasionally go and see a game.

Would you ever want to work as a coach in the Netherlands again?

I am not ruling it out, but I am happy and content in Germany. I still have to get paid as a coach, as it has become my profession. I do think there are a lot of opportunities for that in the Netherlands. Besides that, I would like to work as some kind of ‘General Manager’ for a club or organization. I did not do a Masters in Sports Management for nothing.

You have been the coach of several Dutch National selections. What is the difference between coaching a club team and a national team?

Both of them depend on different factors. While coaching a club team, you have to do work for the long term as well as the short term, while a national team mostly depends on developments on the short term. What happens after that is just not that important anymore. Besides that, you have more quality in your team in the national team, and therefore you will have to work differently.

How do you see the future of Dutch basketball?

We have made enormous progress through the CTO and its spinoffs. As long as there is not a lot of money, the VBL will not gain a lot of quality, because you will always lose the best players to teams abroad. But, this can be a positive thing for the senior national team, as players can develop themselves, while playing at a high level. Besides that, participation in the European club tournaments is important as well, but again, that costs money. But the way they do it in Apeldoorn (Royal Eagles ed.), will definitely lead to improvement of the level in the Netherlands.

Catching up with Juliane Falk