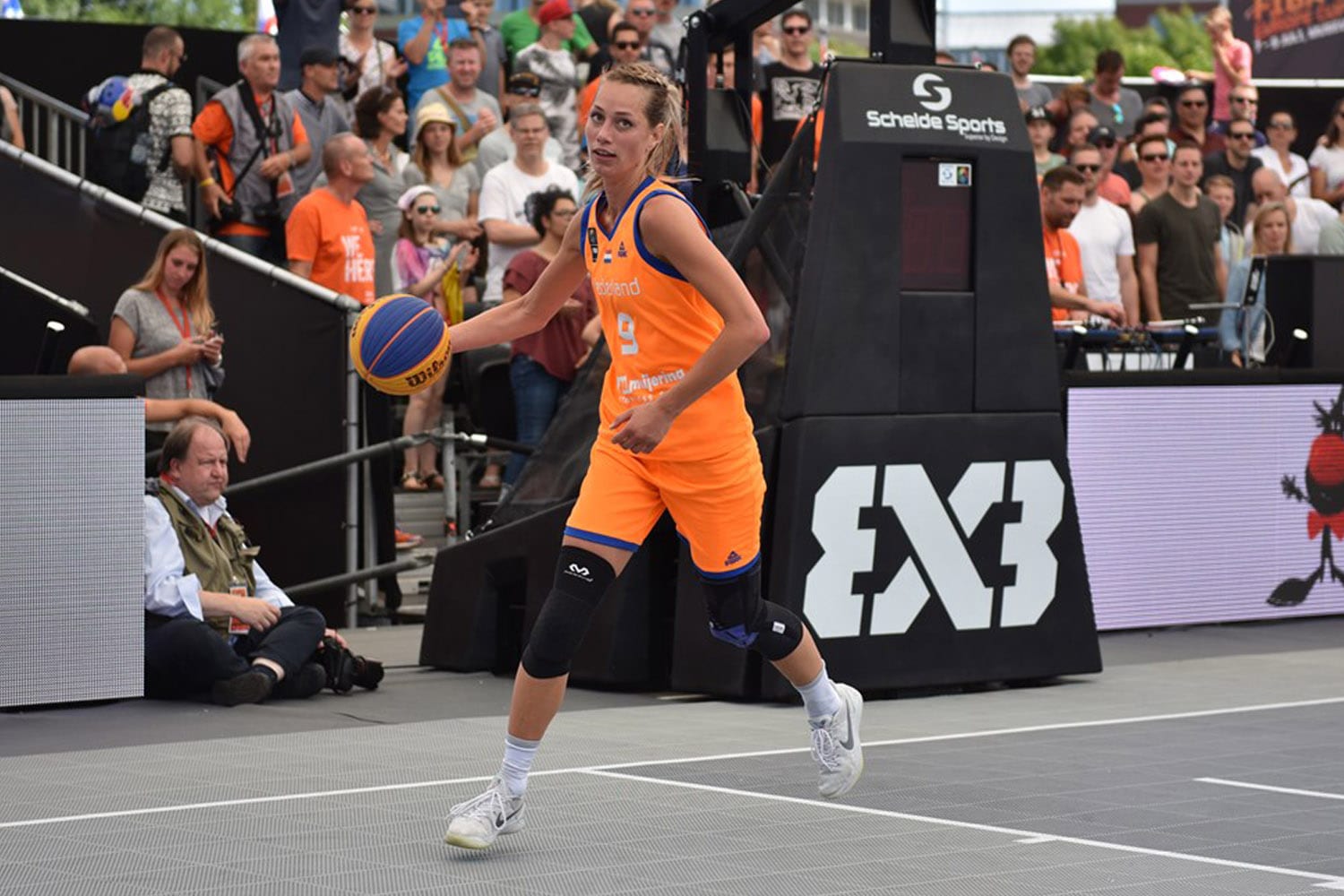 Sharon Beld is one of the faces of Dutch 3×3 basketball. This Summer, she was part of the team that won the bronze medal at the European Championship in Amsterdam on the Museumsquare. The popularity of this discipline has been rising for years and Sharon Beld sees 3×3 as a great chance for Dutch basketball to grow and be part a part of some of the strongest basketball countries in the world. It might even be the chance to reach the Olympics, as 3×3 basketball has been added as a new sports for in Tokyo in 2020.

It is still the best basketball moment in my career. It was a great tournament on the Museumsquare, a packed stadium and winning that bronze medal. I still cannot describe it.

3×3 is now an Olympic sport. Do you have ambition to go to the Olympics?

The Olympics are closer than ever, so it is hard not to think about it. Unfortunately, I have an injury on my foot. The recovery will take about seven months, so first my focus has to be to get healthy again.

If the Netherlands would go to the Olympics on both disciplines, 3×3 and 5×5, which one would you choose?

What has to happen before the Netherlands has a chance to make it to the Olympics?

I think there has to be a program where the players have to choose between 3×3 and 5×5. If we want to have a chance, we have to go full in. That means that the teams have to become a team, get used to each other, do not switch ball continuously and just play a lot of tournaments together.

In Spring 2015, I quit playing for the Dutch National Team 5×5, because I did not see myself making minutes in the team anymore. Though this was the case, I still wanted to play basketball in the Summer. Jesper (Jobse ed.) had just started playing 3×3 and then I started playing as well. That was the time that Jinga Gosschalk, Karen Heinen, Sarah Mourik and Lisa van den Adel played as well. In September, I had the chance to join them to the European Championship in Romania, where we ended up on the fourth place.

3×3 gained in popularity the last few years, but you have been playing for a long time. What are the biggest changes in the sports that you have noticed? And what are you still missing?

The sport is definitely growing, both nationally and internationally. It is noticeable that 3×3 is gaining in popularity, with the European Championship at the Museumsquare last summer being the standout and a definite highlight. I can definitely see the difference. The difference with a few years ago is that, at least on the women’s side, the Dutch National 3×3 and 5×5 teams started working together. There are not a lot of tournaments for the Women’s 3×3 yet, we just play for the European and World Championship tournaments.

The men have so much more tournaments that are all over the world. This means that they can play 3×3 from April until September. It has to be the same for the women!

Do you think it is an advantage that the 3×3 tour in the Netherlands has been expanded?

It is definitely an advantage, because more tournaments mean that we can rank higher. it would be better if more women will join the tournaments, as that means the level of the players at tournaments will be higher.

There are a lot of people against 3×3 basketball. Can you explain why 3×3 is an addition to basketball?

To be fair, I do not really understand why so many people are against it. if you like something or not, that is your own opinion of course. I think 3×3 is a whole different discipline, just like beach volleyball is totally different than volleyball. We are doing a great job internationally. And I think that everyone would enjoy it if we could put the Netherlands on the map on an international level. At the moment, the chance is higher with the National 3×3 team than 5×5. We should do everything we can to keep this lead and maybe even expand it.

You have your own podotherapy practice. Do you have a lot of clients that come from the basketball world?

You are right, I have had this practice for about a year together with my sister Myrthe. The basketball players know where to find us. The women already knew who we were, but since this summer, we have been working with the Dutch National Men’s Team as well. It is a challenge to combine this with playing basketball in Katwijk, and to try and do it all in the right way. Definitely if you take into account how busy the practice is. This means that we have a lot of long days, but I am doing it with passion, and I get a lot of energy out of it.

Can you use your basketball experience in your practice?

Most of the people that come to me are active people. This includes a lot of athletes, of which some compete at a high level. The experience and mentality that I had as an athlete, I use every day at work. I understand how sport at a high level works, you can use it for high level athletes, but also for every patient that wants to get rid of his or her problems as soon as possible.

You started playing volleyball when you were younger. Why did you choose to play basketball?

I played volleyball and Myrthe played basketball. I was secretly very jealous about her basketball practices. We had to stand still a lot and played games, while Myrthe could run around the whole court and was playing with the ball a lot. I knew quite soon that I wanted to play basketball as well.

You have three sisters who play basketball as well. Was there a lot of competition between you?

Not really. Myrthe and I have played together a lot. Luckily, we played on different positions, because I think if we had to defend each other on practice, that would have been war. But we both loved playing together, and we could find each other quite well on the court. Judith and Iris played together a lot as well. Sunday was always the day that we would play basketball together in the backyard.

You live together with Jesper Jobse. Do you talk about something different than basketball?

Haha, ehm, let me say it this way. There is never a day that we do not talk about basketball!

You have played for multiple clubs in the Netherlands. What is the biggest difference between those clubs?

My roots are with Jolly Jumpers. It is a big club where everyone knows each other and there are a lot of youth players. I think Grasshoppers is quite similar to Jolly Jumpers, and I feel right at home there. CTO was a development team and that was the real goal. That was totally different for me. Besides these teams, I have played with Loon Lions, which is a very professional club, but unfortunately we could not meet the expectations to become champion.

Is there a clear difference between the Netherlands and Germany as a basketball country?

Yes, definitely. In Germany, there is a whole different sports culture. Sports are just more popular over there. When I played there, we usually played for around 600/700 people per game and in the play-offs even 1300 people. We do not come close here, except for the European Championship 3×3!