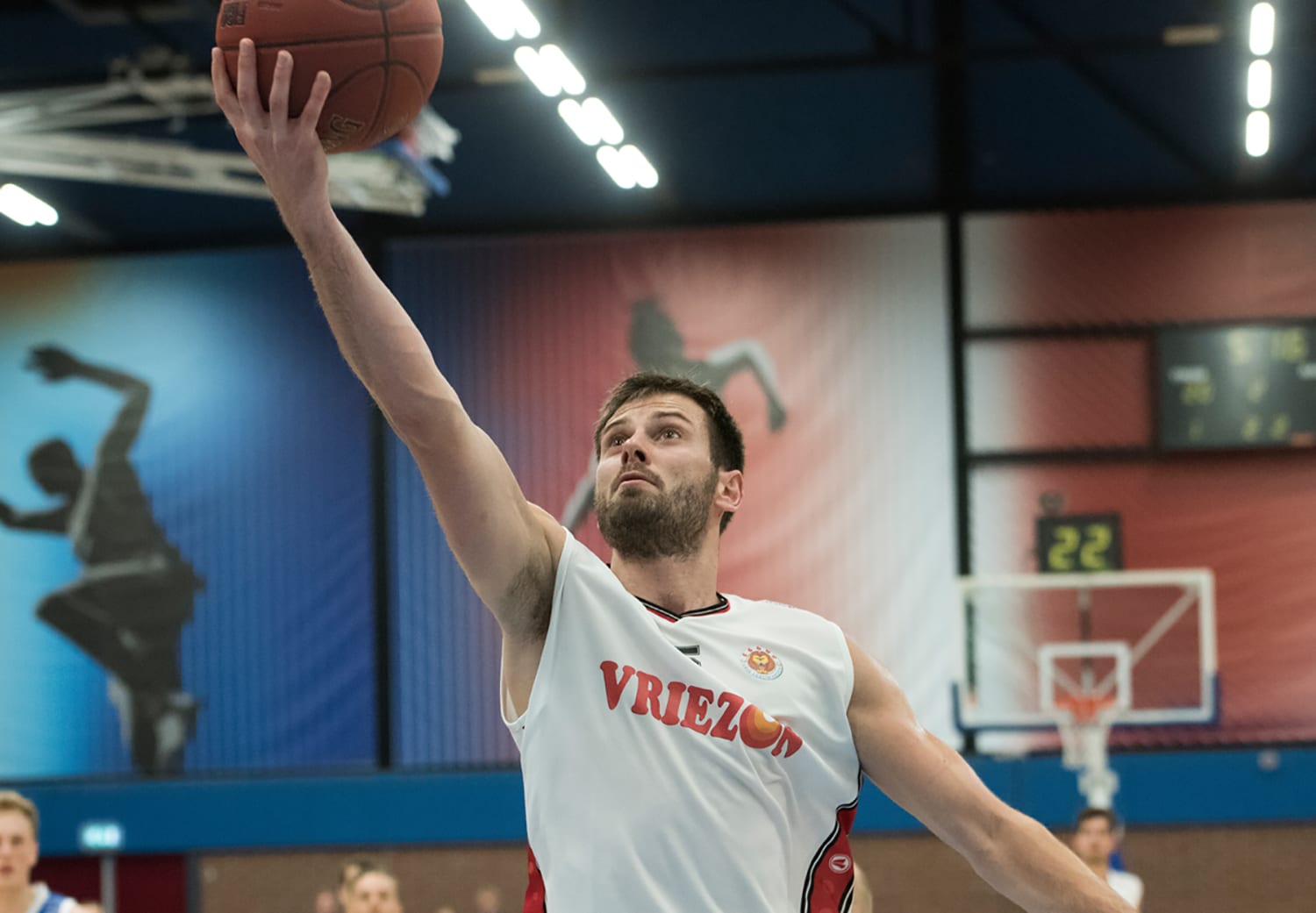 Stefan Mladenovic is a familiar face in Dutch Basketball and has been playing in the DBL since 2007. Last season, he was part of Donar, who won the championship, but he decided that it was time for a new team and a new opportunity. Therefore, Mladenovic decided to join Aris Leeuwarden over the summer. This time, he is one of the most experienced players and he has the chance to have an important role on the team.

When I was young, I played basketball with my brother, Srdjan, outside on a court in Vinkhuizen, Groningen. This was about 100 meters from the court the players of Donar were practicing. We used to watch those practices and the players. That is why we both started playing basketball. Besides that, my parents always watched sports, and basketball in particular. There was and is still always basketball on TV in our house.

You were born in Belgrado. Can you tell us what your roots are?

My parents are from the former Yugoslavia. My father is Serbian and my mother was born in Macedonia. We moved to the Netherlands in 1995.

I do think that I have more temperament than most Dutch people. There are instances when I have to hold myself back, especially on the court, because the Dutch culture is soberer. In former Yugoslavia and other south-east European countries, you can see that people generally have more temperament. Besides that, everyone thinks that I am Dutch in terms of behavior and appearance.

You have switched clubs through the years quite a lot. Is it hard to find the right place with a club?

It can be hard, because it is not always dependent on yourself. I have played for several different clubs throughout the Netherlands, and there are multiple reasons why I did that. Sometimes, I wanted to leave, sometimes the club went bankrupt and other times the club wanted a different kind of player on my position. I prefer to play for a club for several years, where you have some kind of continuity.

You always want to win as an athlete on a high level, and I think that is a very important quality. Last year, I played around 15 minutes a game with Donar (in the regular season) and I think I fulfilled my role I had there well. It is a season I will remember for a long time, as we won every price in the Netherlands and the fact that we were a real TEAM!

I prefer to play a smaller role in a team that wins (a championship team) than have nothing to play for. However, in that limited role, I want to have a certain degree of freedom and not having to slow myself down in the minutes that I do have.

Why did you choose to play for Aris?

Aris is a club that reminds me of the Matrix Magixx, of which I have a lot of fond memories. It is a relative small club, with people that do a lot for the club. It really feels like a family. Besides that, I am one of the more experienced players in the team and therefore I have an important role that I would like to fulfill at this moment in my career.

What are your expectations for Aris this season?

It is always difficult to have clear expectations at the beginning of the season. We have a complete new and young team, with a new and experienced coach. Every day, we work hard to get better as a team. Our goal is to reach the play offs and fight for the fifth place. After the Christmas break, we could be able to compete with the top teams, if we have enough progress in the team.

I am a point guard that can also play on the 2 position, where I like to let the team play well. Besides that, I am a hard worker that will always give everything I have and can on the court.

What are qualities you need to have as a guard?

How do you learn those qualities?

It is a lot of practice and repeating, so when you are playing, you do not have to think about it. There is also definitely some ‘feel for the game’ involved. Just by watching players and teams that play on a high level, you can learn a lot about certain decisions on the court. Besides that, it is important to be able to deal with setbacks. Sooner or later, you will have some setbacks.

What can you learn from the foreign players that play in the Netherlands?

At this moment in my career, I do not learn a lot from the foreign players. I am the eldest and most experienced player in the team, and I try to convey my experience to the younger players. Besides that, we have a coach that has a lot of experience and does that as well. We do talk about the experiences that my teammates already have, but most of them have only played in college or in the Netherlands.

In Groningen, you played together with Lance Jeter, a really good point guard. What can you learn from a player like that?

Lance was one of the best point guards that played in the Netherlands in the last 10 years. What I liked about him was the fact that he never forced something and always tried to let the team play as good as possible. When it was necessary, he was able to take over the game and win the game for us offensively. In terms of playing style, we are very different, as he has a different build and uses that very well.

Do you think you can develop yourself further in the Netherlands, or do you have to go abroad for that?

I think I can still develop as a player in the Netherlands. The past two years, after my injury, I have gotten better, but due to circumstances I have not always played as much. This year, I hope to be able to show my development. I still would like to play abroad, but only if the right team comes forward.

I think that overall, the Dutch basketball has improved over the last few years. There are a lot of Dutch talented players that are doing well abroad. The U16 and U18 had a great tournament at the European Championship this summer. That is very important. I still remember that we won the European Championship U20 in 2010, and most of the players of that team are playing in the DBL or at a higher level. 3×3 basketball lives in the Netherlands, the Dutch National team is doing well and there are plans for another development team. Overall, I think there is a lot of potential in Dutch basketball, and that we are going in the right direction.

Did you watch the last European Championship? And did you have extra focus on the guards, such as Dragic?

Yes, I watched a lot of games, mainly from Serbia. Slovenia surprised me with the way they played. And off course, Goran Dragic is one of the best European players there is. I always see if I can use certain moves in my own game.

For me, Luka Doncic was the most noticeable player of the tournament. That boy is only 18 years old, but plays like he is 28. Furthermore, Bogdan Bogdanovic was also really good and I think that he will be the best European player within two years.

What are your expectations for Teodosic in the NBA? Can he reach the same level with the Clippers as in Europe?

I am a big fan of Milos Teodosic and I even wear his PEAK shoes through my sponsor. I think that it will be easier for him offensively to show his qualities in the NBA. He will probably not stand out as a scorer as the Clippers have enough scorers, but he will definitely will surprise the NBA as a passer. He has his own unique passes that no one else has. Defensively, it will be a lot more difficult for him than in Europe. But with players as DeAndre Jordan and Blake Griffin in the bucket, the Clippers will be able to camouflage that.

You are the co-founder of Stargo, a basketball camp. Why did you start your own camp?

During the last season, I was invited to help as a coach at several basketball camps. At one moment, I decided that I was a fun idea to start my own camp in Groningen. In the last few years, there was not a camp there anymore, and that is a pity for the young, talented, players that want to develop themselves over the summer. Besides that, basketball is more popular in Groningen than in other cities in the Netherlands and there are a lot of young players in this region.

During one of our European games, I asked Drago Pašalić and Arvin Slagter to organize this with me. And they were very enthousiastic as well. Basketball gave us a lot in our lives and we wanted to give something back. That is why we started to prepare for our own camp.

What makes our camp unique is that we also have a social function. We gave the opportunity to several young basketball players to join our camp for free, because their parents did not have the privilege to be able to send their children to our camp. We did have on condition for these players; they had to be very enthusiastic and excited to join.

What is the most important thing you can learn these children?

We had a lot of top players and coaches that learned a lot to these kids on a basketball level. Besides that, we had the goal that the kids would learn something that they could use in their daily life. Discipline, eating healthy, fun and working together were the most important pillars we had, besides trying to make everyone better as a basketball player. For example, we arranged fresh fruit for the kids as snacks between the normal meals. When they wanted something unhealthy, they had to pay for it themselves and get it in the canteen.

How do you use your own experience while coaching?

As a player I experienced different things, and I try to convey this to the players. I think that we, as active players (and coaches) in the DBL and/or on a European level, can give the players a little bit of extra experience that will be an advantage over their opponents in a game. An example is how a player can use his defender to get open. And then I do not mean the ‘normal’ fundamentals that every coach knows. Besides that, we all enjoyed the camp a lot. It is great to coach those enthusiastic kids and try to help them in their development as a player.

A week full of question marks