Now that Carmelo Anthony has been named Western Conference Player of the Week, we can only say that his return to the NBA has been a successful one. Last week, he even averaged 22 points, on more than 50% shooting.

As a lot of fans who wouldn’t believe Melo could make a comeback in the NBA were proven wrong, CTRL the Narrative even created an apology form, from fans to Melo. 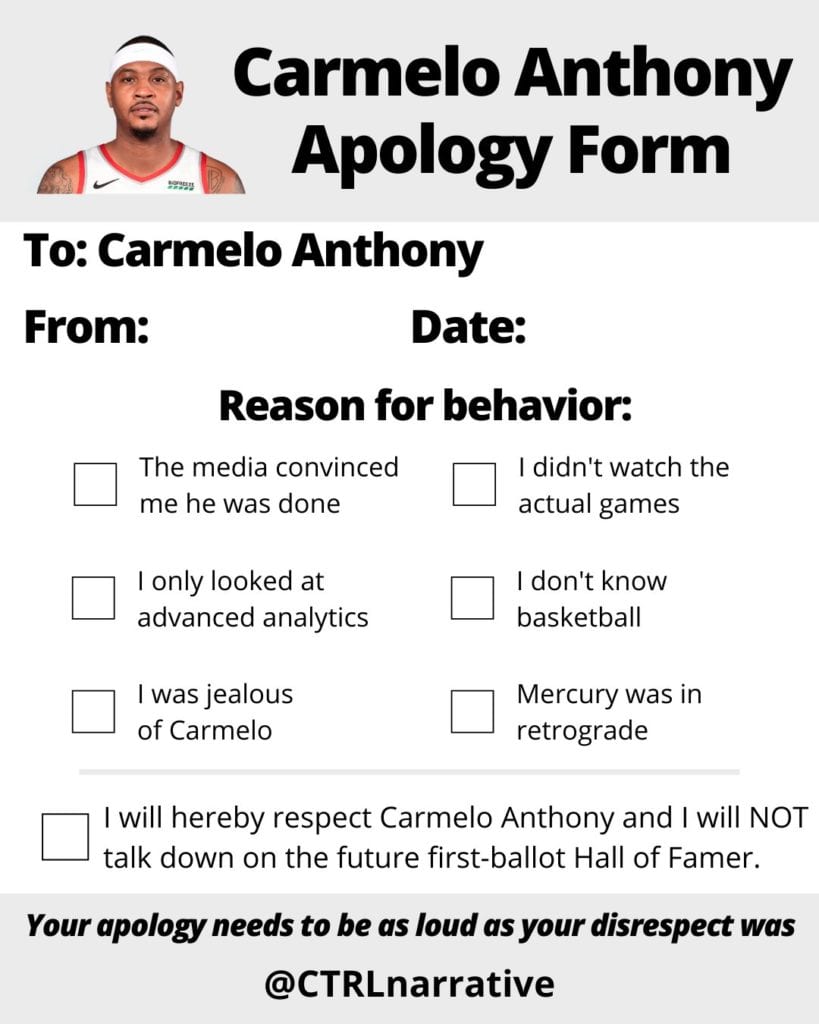 Now, the question is, who is next? Will another player be able to make his return to the NBA in the middle of this season? As always, there are enough players without a team, or a team outside the Unites States who would give everything to make their comeback.

Lin signed a contract in China with the Beijing Ducks this summer, as he was convinced that the NBA and the fans had lost trust in him. But, even though he’s now 31 years-old and in China, he would jump at another chance in the NBA. Lin would still be a great back-up guard for several teams in the league.

For example, the Celtics could use another back-up guard. The scary injury with Kemba Walker proved they were quite thin on the guard position, and Lin could easily fill in that position.

Of course, Bogut only joined the Warriors at the end of last season, after the NBL (in Australia) had come to an end, and returned to Australia because he wanted to. Still, Bogut can be a great addition to any team who needs a back-up on the five position. Furthermore, Bogut is also great for the moral on a team.

This season, there’s almost no chance the Warriors will sign him for the playoffs, as they probably won’t make them, so there’s enough chance for the other teams to contact him.

Crawford is now 39, but still hasn’t officially retired from the NBA. When Melo signed with the Trailblazers, he even said that he want his own ‘Melo moment’. That’s not really surprising, as he still keeps himself in shape, waiting on that call.

The Warriors sacrificed Iguodala this off season to start building a new championship team, and make space to get D’Angelo Russell to San Francisco.That meant Iguodala, after six years with the Warriors, was traded to the Memphis Grizzlies. This was almost six months ago, and the Grizzlies still haven’t waived Iguodala, nor has he put on a Memphis jersey in an official NBA game.

So, Iguodala technically still has a team, but he’s waiting for someone to get him out of Memphis. There have been a lot of rumours surrounding the veteran, including the Lakers, Trailblazers and Mavericks, but so far there haven’t been any serious discussion.