The bond between an athlete and his shoe can be a massive factor in the athlete’s career. Your shoes are one of the factors that help you play more efficiently and a bad pair of kicks can really bring you off your game. When it comes to NBA players, their sneakers can also be seen as an extension of their personality and status. Like Michael Jordan and his “Nike Jordans” or in this case Kareem Abdul-Jabbar and his “adidas Superstars”.

Horst Dassler (son of adidas founder Adi Dassler), was full of frustration. His ambitions went way further than adidas was at that time and every time he had an idea his mother, who was running the business at that time, always turned him down. Horst took his chance when the company needed another factory, due to the rapid pace in which the brand was growing.

His parents were mostly focussing on Europe, so Horst turned his attention to America. His goal was to develop adidas shoes that would appeal to this potentially huge market. Dassler’s US advisor Chris Severn had noted that basketball shoes hadn’t changed since the early 1900’s and the industry was mostly dominated by canvas based designs like Converse’s All-Stars and Pro-Ked’s Royal. These type of shoes provided minimal support and caused a lot of players to injure their ankles and knees.

Severn had a background in basketball and used his knowledge to create a basketball shoe that would provide more stability, comfort, support and excellent traction. He used the same knowledge while developing a new adidas tennis shoe that later grew out to be “the Stan Smith”.

Horst, Severn and various technicians worked closely together to develop what would be an entirely new concept of basketball shoe construction: a “shell sole”, which provided an amazing sole profile to grip the court, improved stability and was 30 percent lighter than other shoes. The final addition, which would become the shoe’s defining feature was a “shell toe”. The shell toe was designed to slow down wear and tear in the forefoot area. The shoe was released in 1964 and was named “Supergrip”.

Starting out, the shoe didn’t sell that well. Mostly due to the fact that coaches were skeptical. The canvas shoe was all they knew and they couldn’t imagine leather being light and flexible. Jack McMahon of the San Diego Rocket got the ball rolling. He had three injured players as a result of them slipping on the court. If there was any chance these new shoes would make a difference he was open to it. It took some convincing, but once he got his team to wear the Supergrip they were ecstatic. By the end of the season, many teams had noticed the Rockets new shoes and wanted in. When the Boston Celtics won the NBA Championships in 1969 while wearing the shoes, Severn’s phone would not stop ringing.

In 1969, adidas decided to give the Supergrip an update. The name had grown out to be huge but didn’t sound very glamorous. Therefore they renamed the shoe “Superstar”. Severn felt like adidas needed a superstar to go with the Superstar. Back then the obvious choice was Kareem Abdul-Jabbar, the biggest star in basketball. Horst agreed to pay Jabbar a record 25.000,- dollars a year to endorse the shoe. 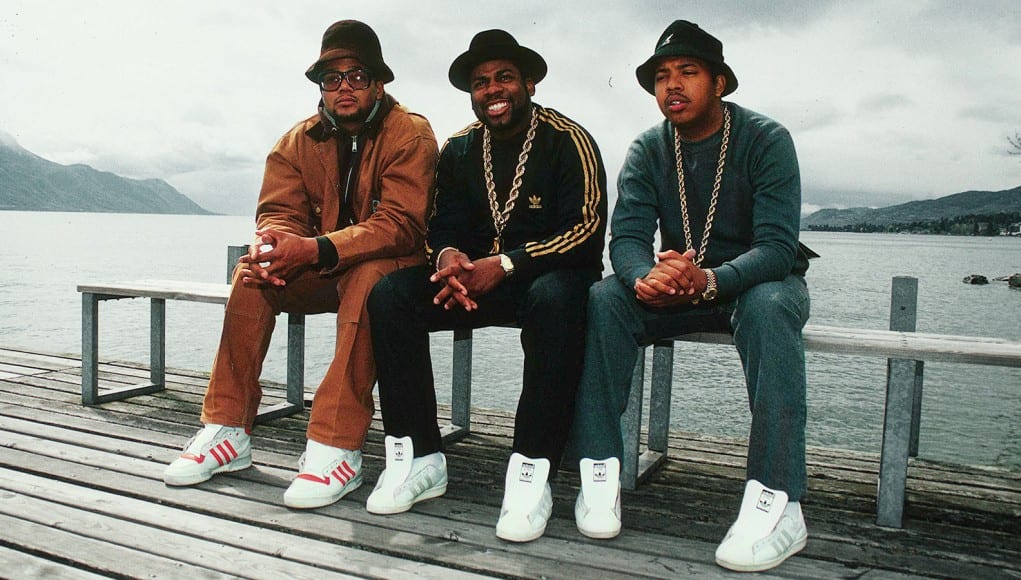 In 1985, Angelo Anastasio (Horst’s US entertainment promotion man) walked out of a concert and noticed 3 young black men wearing adidas tracksuits, breakdancing on the street so he decided to introduce himself. The men explained they wore them because the slippery material was perfect for breakdancing. 3 years later, they became Run DMC. Anastasio ensured them they would get as much adidas gear as they pleased. They wore the garments and sneakers on the streets as well as on stage, the sneaker often without shoelaces, prison style (so-called because suicide watch prisoners had their shoelaces removed). This became a part of their key image and fans followed them every move. That’s when the Superstar became massive in hip-hop culture. Run DMC even wrote a song titled “My adidas” and the rest is history.