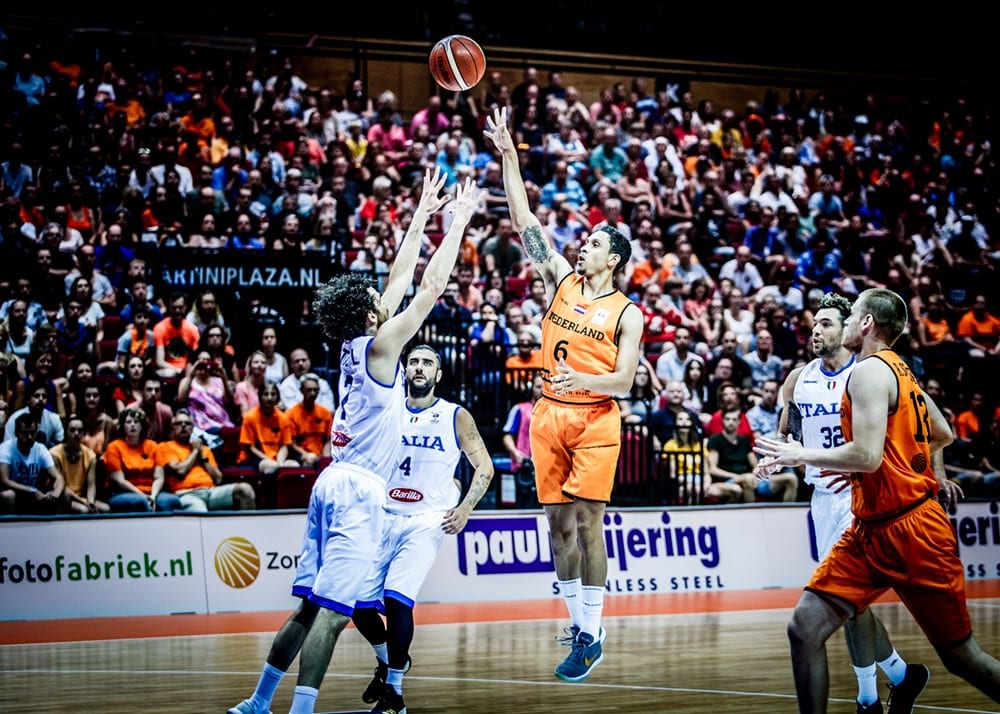 On the 14th of September, the Dutch National Team will start the second round of the qualifiers on the road to the 2019 World Cup. They advanced to the second round after they defeated Romania with enough points, and as a bonus they managed to beat Italy for the first time in decades. Now, Worthy de Jong and the rest of the Dutch National Team will have to get past Lithuania, Hungary and Poland.

You missed the 2017 Eurobasket because of the point difference, as you lost with too many points against Germany in the last game. Now, how does it feel to win with enough points against Romania to advance to the next round?

That is a fantastic feeling, but we also know that we’re definitely not there yet. We don’t want to celebrate too soon, as we still have the entire second round to go.

What did you learn from the last time that has gone better in these qualifiers? Is it experience or have you dealt with things differently.

I think it’s a combination of both of those things. We have to make the right adjustments to the way we play, and of course the experience everyone has had throughout the last years on the team definitely help.

What is the role of Toon van Helfteren?

He’s the coach and for many of us, he’s also a mentor off the court. He knows how he can put together the right group of players, so we can achieve success.

The team is currently in an upward trend, both in the style of play as the results. What’s your view on that?

I think that that’s because of all the small adjustments we’re making within the team, and just the fact that we’re starting to do those tactical things better and better as time goes by.

Has your participation in the 2015 Eurobasket contributed to that?

That’s for sure! If you get the chance to participate in a tournament on one of the biggest stages in the world, you learn a lot that will also help you further on.

What’s the limit for this team?

I think we will only get better with time, the right combination of veterans and young players, as the veterans can educate the young players in the right way. If that’s the case, we can do a lot of damage in the years to come.

The team had a historic win against Italy. Did you have the idea you could beat them beforehand?

I think we’re not afraid of anyone. We rely on our own strength and that’s what we’re working with. As of now, the picture is just right and works for us.

Can the team now compete with the ‘bigger’ basketball countries?

Definitely! I think we’ve been proving that for a couple of years now, and that we’ll only get better from this point on.

What does this promise for the second round?

Opportunities! We have the chance to show everyone we made steps, and take new steps forward again.

Now, you’ll have to play against Lithuania and Hungary, who’ll in the case of Lithuania, probably have NBA players to strengthen their team. Does that make any difference to you?

We’ll go into those games the same way we always do. They’ll be introduced to the Netherlands, and every campaign we get better, so I think it’ll definitely be a great second round.

What steps does the team need to make to reach the World Cup?

We will just have to win it game by game.

When do you start practicing as a team again?

The plan is that we’ll meet a few weeks before the second round and begin practicing as a team. At that point, we’re going to focus on the things we did well the last time and build on that as a team.

You’re currenly in the 3X3 Pro League with several of your teammates. How does that fit in with your preparation for next season?

Well, it works for me on two aspects. First, it keeps me fit and at the same time it’s a new challenge for me.

Did you discuss the (dis)advantages of participating in such events in Summer as a team, especially before such an important period?

Yes, of course we discussed it. We made good agreements about it.