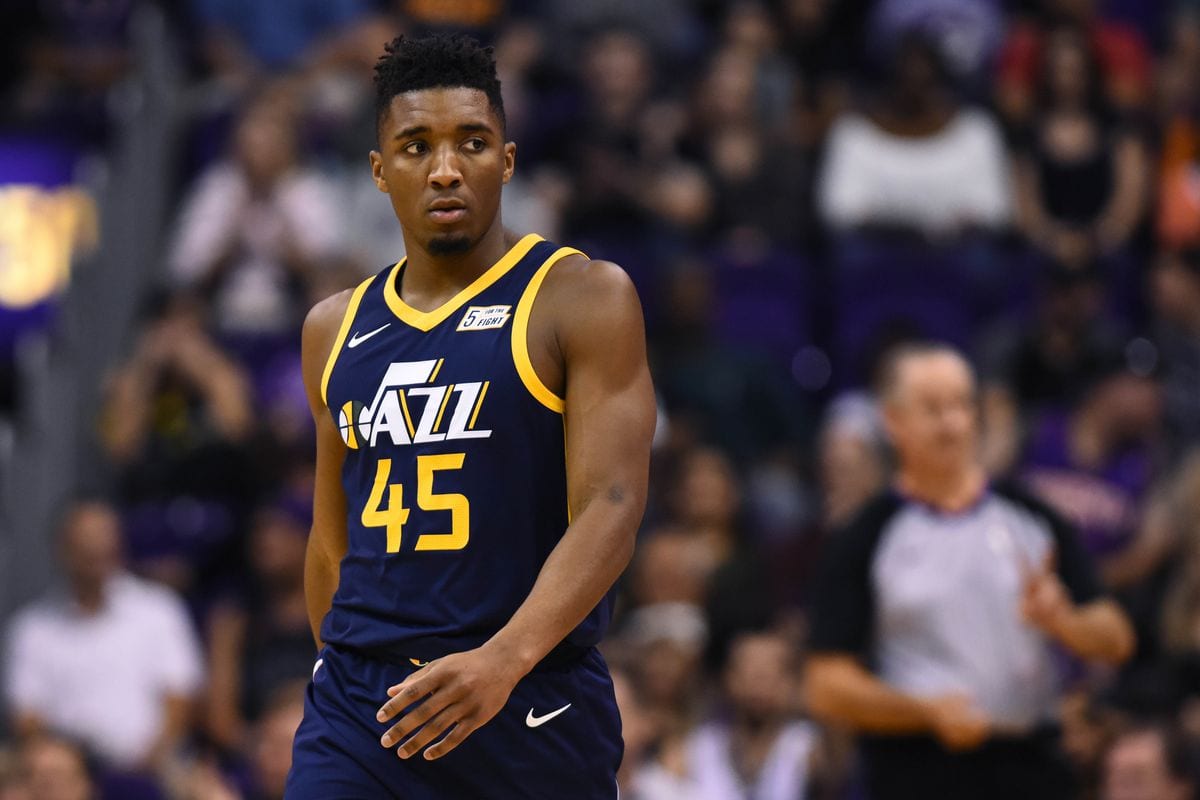 After a superb and very demanding season with the Utah Jazz you would expect Donovan Mitchell would take the summer off to get some rest as he played 2638 tiring minutes in his first NBA season, most minutes among rookies. Not counting his minutes in the Rookie game at All-Star Weekend and winning the Dunking Contest. But two days after his last game of the season on May 8 (a loss against Houston in the play-offs) one could foresee Mitchell isn’t the player to take a rest on his days off when he said he had a plan to improve his skills. So take a look at his busy summer schedule.

After the season ending loss Mitchell said he planned to spend his summer binge-watching all 92 games he played last season to see in which areas he can improve. All 92? Yes all 92! Watching games isn’t a new science for Donovan as he held many film sessions with the  Jazz coaching staff during the season to help him. For example, they learned him to sprint towards the corner in transition to get more open looks to shoot.

But as watching a complete NBA game will take you about three hours on television, it will certainly take at least 4 hours a game if you are looking for areas to improve. That’s 92 games, and 4 hours watching a game, that makes up for 368 hours. So if Mitchell would watch his 92 games non-stop he would have to watch for at least 15 days and 8 hours in a row. His binge-watching alone would have been a guarantee for a busy summer.

May 20, Belgrade, Serbia, watched the Final Four in Europe

Mitchell took a plane and watched the final of the Euroleague (Tournament of Champions in Europe) with teammate Epke Udoh, along with 15.000 screaming fans. Real Madrid, with Luka Doncic, won the tournament, beating CSKA Moscow.  On Twitter Mitchell said: ’This Euroleague Final game is crazy!! One of the craziest atmospheres I’ve ever seen’.

May 29, The Players Tribune article

No moral W’s, an article written by Mitchell is published by The Players Tribune. Mitchell promises Jazz fans his goal is to bring a championship to Salt Lake City

Mitchell held his own basketball camp for the first time. He had a special guest: his good friend Frank Ntilikina of the New York Knicks

June 5, Cleveland, June 3, interviewed Kevin Love prior to game 3 of the NBA Finals

In an interview posted on Twitter Mitchell spoke with Kevin Love about fashion, the Finals and life off the court

While being in the stadium Mitchell had time to throw some balls in the speed pitch booth. Mitchell, whose father was a former minor league infielder, had a 81 mile pitch

Mitchell, who is from New York, threw the first pitch at a Mets-Yankees game

Mitchell visited Manilla for the first time and held a press conference to promote his Adidas shoe brand. He also did some drills on a court with local talents.

Mitchell appeared on the NBA draft broadcast on ESPN at Barclays Center as part of the in-arena show. He was interviewing draftees and doing commentary. Is there anything Donovan can’t do?

Mitchell took a small trip to Santa Monica to attend the NBA Awards show. Mitchell was a finalist for Rookie of the Year but Ben Simmons received the award over him.

Mitchell had a good night with teammates Royce O’Neal and rookies Grayson Allen and Trey Lewis in Viviant Arena. They were special guests of the show near the stage.

Mitchell and teammates Epke Udoh and Royce O’Neal made a visit to the tournament and surprised hundreds of young competitors.

Mitchell supported Jazz rookie Grayson Allen during time-outs in the opening game of the tournament versus San Antonio.

As he didn’t have any plans for a Fourth of July BBQ Mitchell asked fans on Twitter if there were any good BBQs in Salt Lake City. He received plenty of invitations, went to three different ones and had the most fun at a fan’s BBQ as the family had a waterslide and a pool. Mitchell even played a game of pool basketball at the party

Watched the Los Angeles Clippers versus Golden State in Vegas with girlfriend Deja Lighty at the University of Nevada’s Thomas and Mack Center.

Next day at practice of the Jazz Summer League team assisting with on-court drills.

Mitchell was in Badelona (the city near Barcelona where his teammate Ricky Rubio started his career) for Adidas and spent time on a basketball court with James Harden. He spent some time with Rubio too. ‘Ricky’s house is really nice’, he told a journalist in Salt Lake.

Mitchell was at home in Salt Lake during Pioneer Day, the day Utah commemorates the entry of Brigham Young and the first group of Mormon Pioneers into the Salt lake Valley in 1847

Mitchell and his mom took a 6400 mile trip from Salt Lake City to Shanghai (and back) when it was announced that he appeared on the cover of the NBA 2K video game in China. The game is played by 37 million Chinese fans. Mitchell loved this trip. On Twitter he said: ’Crazy to go from playing to being on the cover of the game.’

Mitchell worked in his basketball camp for 300 kids at the Donovan Mitchell Basketball Camp. Mitchell’s first basketball camp in Utah was sold out in hours. Has Mitchell ever heard of the word ‘jetlag’?

Mitchell was at the Cheese Factory for a meal when he met a young fan who is battling cancer. He went back to his car to sign a pair of Adidas sneakers for her.

Mitchell spoke to the men’s basketball team of the University of Utah. The team thanked him the day after on Twitter: Big thank you to @spidamitchellfor coming & speaking to the team today! Stay humble & hungry!