In two weeks the 33rd edition of the Air Jordan will be released (18th October 2018). That is a reason for us to look back at the previous impressive designs from the most iconic basketball shoe brand Air Jordan. Originally produced exclusively for Michael Jordan in 1984, later that year released to the public by Nike.

A lot of the designs from the past are still very popular, so sit down, get a little smarter and maybe even get inspired by all these Air Jordan designs.

The first Air Jordan was designed by Peter Moore in 1985. The shoe was specially created for Michael Jordan, Nike saw the potential in Michael as both a player and a marketing icon. When Jordan first saw the shoe he was drawn back, saying things like, “I’m not wearing that shoe. I’ll look like a clown,” and, “those are devils colors” but was eventually coaxed into signing the $2.5 million contract with Nike by his parents, seeing how great of an opportunity he was being handed.

The second Air Jordan was the only shoe produced in Italy. Also, it was the first without the Nike trademark “swoosh” across the shoe. Instead, the original Air Jordan wings logo made a much more prominent appearance on the front tongue of the shoe. This is also the only Air Jordan shoe to not be originally made in black.

This design introduced the padded tongue showing the iconic jump man logo and a first for clear rubber outsoles. Added, a plastic lace-lock, leather upper and side vents converge so the Air Jordan V looked ready for take-off. 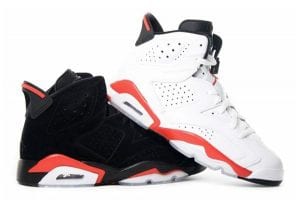 Seven years, six shoes. with the Air Jordan 6, the inside of the design was improved. They got a clear rubber sole. On the rubber sole of the Air Jordan 5’s, there was a lot of negative feedback, because it would have been slippery and was seen as reasons for accidents. Therefore, they enhanced this into a more solid rubber.

Michael wore the Air Jordan VII during the 1992 Olympic games in Barcelona, where Michael and his team won the gold medal. He also wore the shoe in a marketing campaign where he appeared alongside Bugs Bunny who was featured on a poster with Jordan.

The Air Jordan IX represented Jordan going global. This shoe was released the same year that Michael retired in 1993.

With these Jordan’s they dominated the regular season winning 72 games. Jordan was back for real and he led the Bulls to yet another NBA victory. This design contains patent leather, be Tinker Hatfield wanted the shoe to look like a convertible, with a shiny body.

Michael Jordan was going to retire after this season. He wore these shoes when he won his 6th NBA Championship with the Chicago Bulls. This design is considered as the best by a lot of fans of Jordan shoes. Jordan his nickname was ‘Black Cat’, because of his speed en fast reflexes. Tinker Hatfield was inspired by the paws of a Panther when designing the outsole of the shoe.

Celebrating the 20th anniversary of the Jordan sneakers, with this motorcycle-inspired shoe.

The Afterburners is a pack that offers the best performance: innovation and high-tech features boasts of Italian heritage. It’s a car inspired sneaker and is based on the Bentley Continental GT Coupe.

Air Jordan markets its 25th anniversary with the ‘full speed ahead’ designed by Mark Smith and Tinker Hatfield. These two men were footwear legends. In the middle of the sneaker, the shoe features a clear window. The clear window was incorporated into the design as a representation of looking into the life and game of Michael Jordan.

With the Air Jordan 2012, they featured interchangeable insoles. The sneaker was released in a full system of style, making it customizable for the player. For example, they could choose between a high or mid cut because of the interchangeable booties.

Air Jordan XX8 was released during a top-secret event in Manhattan. Here, Russell Westbrook spoke about his eagerness to become the flag bearer for the Air Jordan legacy, promising some special colorways following the next night’s on-foot debut of the shoe. Does the game make you? or do you make the game?

Designed with the purpose to be a high-performance basketball shoe. They took inspiration from the classic Jordan II, the first sneaker not to show the Nike Swoosh. All the variations are full of features, including snakeskin detailing, and a hidden lace harness that allows for total lockdown, to prevent problems whilst on the court.

Jordan’s most revolutionary shoe. It has a FastFit closure system that locks your feet. With a white, metallic gold, black, color scheme. Finished with black, gold and red detailing. The Air Jordan Future of Flight will be released on the 18th of October.