Most NBA players set themselves apart on the court with a pair of statement sneakers, since they’re bound to wearing their team’s outfit. Through the years, however, more and more players are famous for their iconic hairstyles. Whether it’s long, short, sleek, braided or curly, these five player’s hair always looks on fleek no matter how much they jump, run and sweat.

As one of the most fashionable guys in the NBA, it’s no surprise Golden State Warrior, Nick young also pays a lot of attention to his hair, often referred to as the “Swaggy P Frowhawk”. Countless fans have mimicked this hairstyle and added their own twist. To get Young’s hair, your sides must be faded or cut short and tapered with a lineup. The hair on top is longer and styled into a mohawk or afro.

The best part of Oklahoma City Thunder, Steven Adam’s hair is the fact that, and I quote “He was tired of paying 60 dollars for a haircut”. Obviously, he can easily afford it but it’s a matter of principle. He also grew a fantastic mustache to go with his long locks, which earned him the nickname “Khal Drogo” who is portrayed by Jason Momoa in the hit series, Game of Thrones. 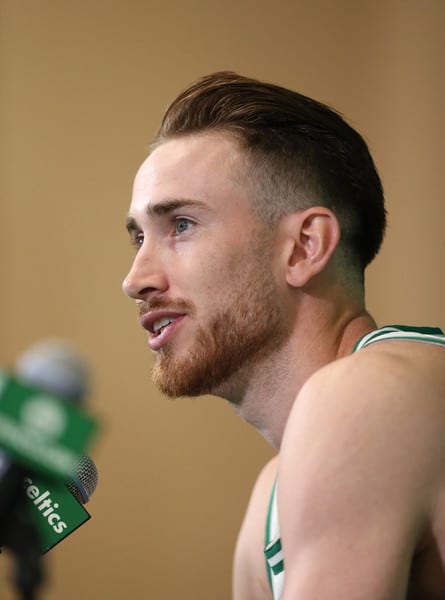 Sadly we haven’t seen much of Hayward the past season due to his tragic injury within the first five minutes of the first game of the season, but he definitely still deserves to be on this list. Luckily the Boston Celtic seems to be making a good recovery, so hopefully, we can continue to swoon over his polished hair and rusty toned beard during the next season.

The return of the nineties fade is one of the biggest hair trends today and nobody wears it better than Boston Celtic, Jaylen Brown. The flattop look is such a classic and reminds us of the early NBA days. Fellow NBA player, Iman Shumpert also rocked the look for a while but decided it was time for him to say goodbye and try something new. Luckily, Jaylen doesn’t feel the same way.

Utah Jazz star, Ricky Rubio’s mid-long, pitch black, sleek hair looks like he came straight out of a Pirates of the Caribean movie, thus it’s no surprise he’s often compared with Hollywood heartthrob, Orlando Bloom. His hair evolution is definitely one of the best of this list, considering his previous boy-next-door shaggy haircut.