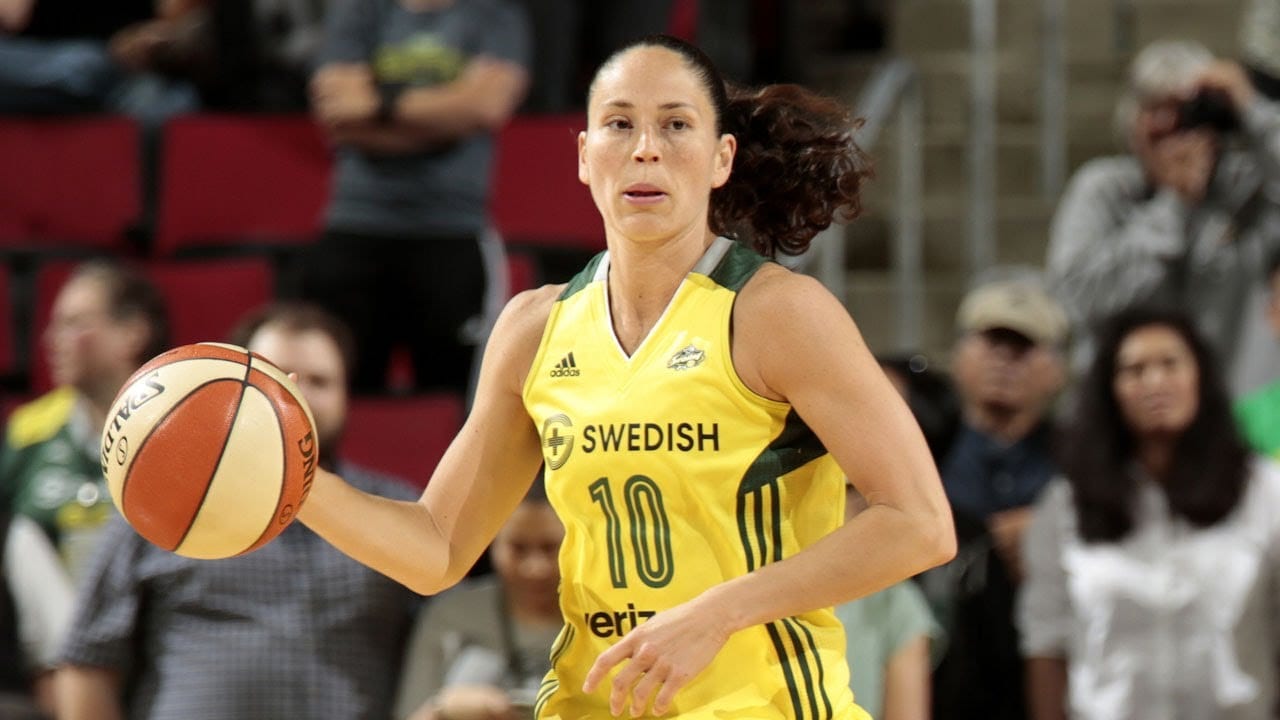 As of 2017, Sue Bird became the oldest starter in the WNBA, but that doesn’t mean she’s slowing down. Bird keeps doing the same things she has been doing since she was drafted into the NBA in 2002. She’s still a great point guard, with amazing passing skills and she’s also a decent scorer. Last season, she even took over the first position on the all-time assists list. Bird might not be known for her flashy passes, but they’re effective and as a true floor general, she makes her teammates better.

Bird was already a convincing and dominating player during her time at the University of Connecticut, though she missed most of her first season due to a torn ACL. But, she came back strong, and led her team to a 36-1 record and the NCAA Tournament Title. She ended her college career with two national championships, and she won the Wade Trophy and Naismith award, as the college player of the year.

In 2002, she was selected by the Seattle Storm with the first pick, and Bird immediately led the Storm to their first ever playoffs appearance, together with former 1st pick Lauren Jackson. But, it would take another two years before the Storm would win their first WNBA title. They needed one more key player to complete the team, and the Storm got that player in 2004, when Betty Lennox was acquired through a dispersal draft. Together with Jackson and Lennox, Bird formed a dominating trio, and they won the Storm’s first title. This made Bird one of nine women to win an Olympic Gold Medal, an NCAA Championship and a WNBA title.

14 years later, Bird has won one more title with the Storm (2010), underwent two knee surgeries, but she put up one of her best numbers in the last two seasons. In 2017, after having another knee surgery in the off-season, Bird was even voted an All-Star for the tenth time in her career.

In this 2018 season, Sue Bird again seemed unstoppable, and though her teammate Breanna Stewart was named the MVP, Bird remained one of the most important players on the team. But, as always the season doesn’t really start until the playoffs begin, and Bird proved she could be as deadly as ever in Game 5 against the Phoenix Mercury.

It was quite a thrilling series, as the Storm had taken a 2-0 lead in the series, but the Mercury made clear that they didn’t want to go home yet and forced Game 5. That’s when Bird had enough. She had broken her nose in the last game and was forced to play with a mask, and to fair it seemed to bother her in the first half. Luckily, her teammates were on top of their game and kept the win within reach.

Then, when something really needed to happen, Bird showed her true self and took over the game. She was subbed in halfway through the fourth quarter, dished out great passes, made three difficult threes and suddenly the Storm were in the lead. The Mercury seemed to have no chance at all to stop her, and the Storm advanced to the Finals.

Hopefully, Bird will be able to do the same against the Mystics.